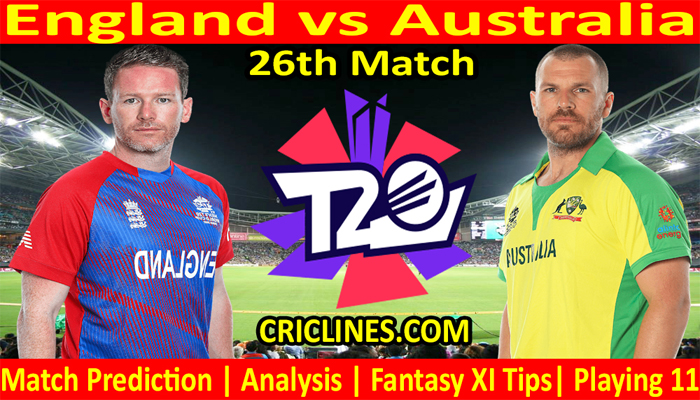 The world is ready to witness yet another big battle of World Cup T20. The 26th Match of World Cup T20 2021 is scheduled to play between England and Australia on Saturday, 30th October 2021 at Dubai International Cricket Stadium, Dubai. We are posting safe, accurate, and secure today match prediction of ICC T20 World Cup free.

England and Australia are the strong teams of group 1 and both teams had won the both played matches. The winner of this match will have a clear chance to qualify for the semi-finals. England had beaten West Indies and Bangladesh while Australia had won their matches against South Africa and Sri Lanka.

England had beaten Bangladesh quite easily in their most recent match. The way how the bowling department of England performed in the previous match was just outstanding. They leaked just 124 runs in their inning of 20 overs. Tymal Mills was the highest wicket-taker from their side who picked three wickets in his four overs bowled out while he was charged for 27 runs. Liam Livingstone picked two wickets in his three overs bowled out against 15 runs.

Moeen Ali was the other bowler who picked two wickets. He leaked 18 runs in his three overs while Chris Woakes had one wicket to his name. The batting order of England also performed well in the previous match. They chased the target of 125 runs in just 14.1 overs. Jason Roy was the most successful and highest run-scorer from their side who scored 61 runs on just 38 deliveries with the help of five boundaries and three huge sixes. Dawid Malan remained not out after scoring 28 runs. He faced 25 balls and smashed three boundaries during his inning while Jos Buttler had 18 runs to his name.

Australia is coming to this match on the back of a massive win over Sri Lanka with a huge margin of seven wickets. The performance of their bowling unit was not impressive. They leaked 154 runs in their 20 overs inning. Adam Zampa was the most successful bowler from their side who picked two wickets in his four overs bowled out against just 12 runs. Pat Cummins and Mitchell Starc picked one wicket each while Josh Hazlewood, Glenn Maxwell, and Marcus Stoinis were the bowlers who failed to pick any wicket.

The performance of the batting order of Australia was just outstanding in the previous match. They chased the target of 155 runs in just 17 overs. David Warner was the most successful and highest run-scorer from their side who scored 65 runs. He faced 42 deliveries and smashed 10 boundaries during his inning. The skipper, Aaron Finch also had an outstanding performance with the bat. he scored 37 runs and smashed five boundaries and two huge sixes during his inning.

England had played 19 T20 matches against Australia where they had won 8 while Australia had won 10 matches. One match between these two teams was ended with no result.

Jason Roy, David Warner, and Aaron Finch are key players to watch in this match.

The 26th Match of World Cup T20 2021 is going to be held at Dubai International Cricket Stadium, Dubai. We had observed in the previous matches played here that the pitch here at this venue is good for batting. The track is slower than the others we have seen and helps the spinners quite a bit. We are hoping that the surface is bound to get slower and be a bit more difficult for batting in this match. A score of 170 is going to be tough to chase.

Who Will Win England vs Australia, 26th Match WTC 21