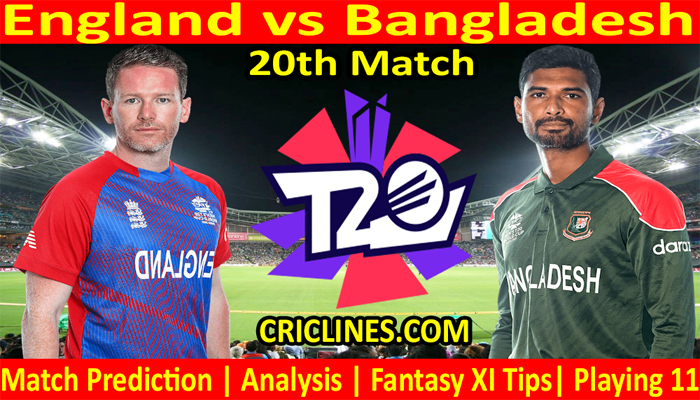 The world is ready to witness yet another big battle of World Cup T20. The 20th Match of World Cup T20 2021 is scheduled to play between England and Bangladesh on Wednesday, 27th October 2021 at Sheikh Zayed Stadium, Abu Dhabi. We are posting safe, accurate, and secure today match prediction of ICC T20 World Cup free.

Many of us were not expecting that the bowling unit of England will give such a good performance in their first match against West Indies. They send all teams of the defending champion back to the pavilion on a total of just 55 runs in 14.2 overs. Adil Rashid was the most successful bowler from their side who picked four wickets in his 2.2 overs bowled out against just two runs. Tymal Mills and Moeen Ali were the other bowlers who destroyed the batting order of the West Indies. Both bowlers picked two wickets each in their very first match.

Chris Woakes and Chris Jordan picked one wicket each. The batting order of England failed to give the performance as many of us were expecting. They chased the target of 56 runs and they lost their key four batsmen like Jason Roy, Jonny Bairstow, Moeen Ali, and Liam Livingstone while chasing the low target. Jos Buttler was the most successful and highest run-scorer from their side who remained not out after scoring 24 runs. He faced 22 balls and smashed three boundaries during his inning. Jason Roy scored just 11 runs.

Bangladesh lost their first match of ICC T20 World Cup due to the worst performance by their bowling department. The way how the batting order of Bangladesh performed in the previous match was just outstanding. They put a total of 171 runs on the board in their inning of 20 overs. Mohammad Naim was the highest run-scorer from their side who scored 52 runs. He faced 52 deliveries and smashed six boundaries during his inning. Mushfiqur Rahim was the other batsman from their side who put some runs on the board.

Mushfiqur Rahim remained not out after scoring 57 runs. He faced 37 balls and smashed five boundaries and five boundaries and two huge sixes during his inning. The bowling department of Bangladesh totally failed to give the best performance and leaked the target of 172 runs in 18.5 overs. Shakib Al Hasan was the most successful bowler from their side who picked two wickets in his three overs bowled out against just 17 runs. Nasum Ahmed also picked two wickets but he leaked plenty of runs. He was charged for 29 runs in 2.5 overs. Mohammad Saifuddin picked one wicket while Mahedi Hasan, Mustafizur Rahman, Afif Hossain, and Mahmudullah were the bowlers who failed to pick any wicket.

England had never faced Bangladesh in T20 cricket and this will be the first match between these two teams.

Mushfiqur Rahim, Jos Buttler, and Adil Rashid are key players to watch in this match.

The 20th Match of World Cup T20 2021 is going to be held at Sheikh Zayed Stadium, Abu Dhabi. We had observed in the previous matches played here that the pitch here at this venue is good for batting. The track is slower than the others we have seen and helps the spinners quite a bit. We are hoping that the surface is bound to get slower and be a bit more difficult for batting in this match. A score of 170 is going to be tough to chase.

Who Will Win England vs Bangladesh, 20th Match WTC 21