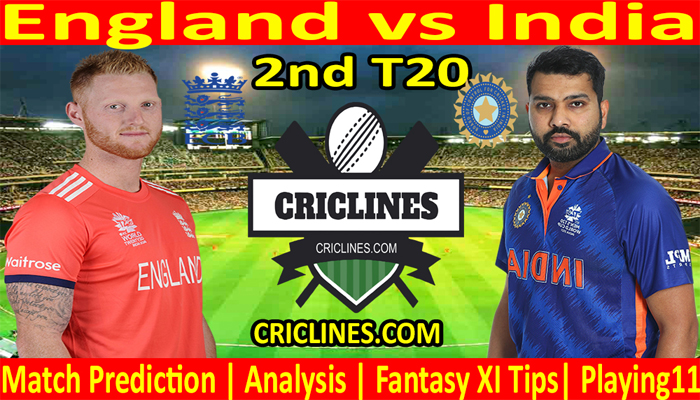 The world is ready to witness yet another big battle of T20 cricket. The 2nd T20 match of the India tour of England, 2022 is scheduled to be held on Saturday, 9th July 2022 at Edgbaston, Birmingham. We are providing 100 safe, perfect, and accurate today match prediction of England and India.

India had a winning start to this series of three T20 matches against the home and favorite side, England. India has some good news for the next matches. They have their key all-rounders in good form and their legendary players from the test series will also join the team in this match. On the other hand, England outplayed in the first T20 match and they will be worried about their performance. We don’t think that a bad performance in one match proves that England is a bad team. They have much strength in the squad and can bounce back in any match. This match is going to be very interesting as India needs just one win to have the series to their name while England needs to win this match to tie the series. In this case, the third T20 match will play the role of the final match.

The first T20 did not prove good for England and nothing went in their favor which they did. Let’s talk about the bowling department of England could not do well in the opening match. They leaked plenty of runs in the middle and last overs. They were charged for 198 runs in 20 overs. Sam Curran, R Topley, Moeen Ali, Tymal Mills, Matthew Parkinson, Chris Jordan, and Liam Livingstone were used as the bowlers in the first match. Chris Jordan was the only bowler who created a lot of problems and avoid punishment by the batters of India. He picked two wickets in four overs against just 23 runs. Moeen Ali was the other bowler with two wickets to his name in two overs while he was charged for 26 runs. R Topley, Matthew Parkinson, and Tymal Mills picked one wicket each. Liam Livingstone and Jose Buttler are the two key batters of England but both batters could not score some big runs in the opening match. England has depth in the batting and Sam Curran is the player who is batting at number seven which is the batting strength of England.

The form of Jose Buttler and Liam Livingstone is a huge question mark and we will have the answer to it in this match. Both batters have to give the best performance in this match against Bhvneshwar Kumar otherwise, the result of the match will be the same as the first match. Bhuvneshwar Kumar had picked the wicket of Jose Buttler four times and this had happened with he was in the single-figure runs. Once against we are sure that if Jose Buttler gets some runs, it will be very difficult for the bowlers of India to stop the batters of England. England has some bad impressions with the bad performances by the star players of England like David Malan and even Jason Roy. We saw Jason Roy struggling with the spin bowlers. Axar Patel and Chahal put a lot of pressure on the batters of England but we don’t think that this is going to happen once again in this match.

India played the first match against England with the same team as they were against Ireland. Now they have their star players back on the squad like Rishab Pant, Jasprit Bumrah, Ravindra Jadeja, Shreyas Iyer, and Virat Kohli. The form of Virat Kohli is not the greatest but we are sure that he will be a part of squad of India. In our opinion, he will replace Deepak Hooda in this match. The form of King Kohli has been a big question mark and he will be under pressure in this match. Rishab Pant is the other player who will get a chance in the final playing eleven for this match but we don’t think this about Shreyas Iyer. We think that Rishabh Pant will replace Dinesh Karthik in this match. If this happens, it means that Hardik Pandya and Deepak Hooda will have to bowl almost four overs each. Axar Patel will surely miss this match.

Hardik Pandya is back to good form but if the management of team India changes his batting position, we can’t say that he will perform well in this match. Currently, he is batting in the fifth position. Jasprit Hardik Pandya is the other player who will get a chance in this match and we think that he will replace Arshdeep Singh. We think that India will give the chances to the senior players than younger players and the pressure will be on the seniors. Still, we are not sure what will be the final playing eleven before the toss but we can say that we will see so many changes in the final playing eleven of this match. Hardik Pandya was just good with the bat and the ball in the first match. He scored fifty-plus runs and also picked four wickets. Suryakumar Yadav scored 39 runs while Yuzvendra Chahal and Arshdeep Singh picked two wickets each. Bhuvneshwar Kumar was also good with the ball and leaked just 10 runs in three overs and picked one wicket.

England had played a total of 149 T20 matches so far. They won 79 matches while other teams won 65 matches. 5 matches of England ended with no result and one match was tied.

India had played 167 T20 matches right now with 109 wins to their name while they had lost 53 matches. Their five matches ended with no result.

England had played 20 T20 matches against India where they had won 9 matches while India had won 11 matches.

The 2nd T20 Match match between England and India is going to be played at Edgbaston, Birmingham. The pitch at this stadium is excellent for batting. The boundaries at this venue are short and will bring the spinners into play. The pitch will continue to be good for batting throughout the match. A total of 175 can be difficult for batting second to chase.

The weather forecast in Birmingham on match day is good for a cricket match. There are some chances of rain but that is possible that we may have an interrupted match.

Who Will Win England vs India 2nd T20 Match

Who Will Win England vs India 2nd T20 Match Toss-ENG

Who Will Win England vs India 2nd T20 Match Match-IND

Dream11 prediction for England vs India. After checking the latest player’s availability, the Dream 11 Team for this match between England and India is mentioned.