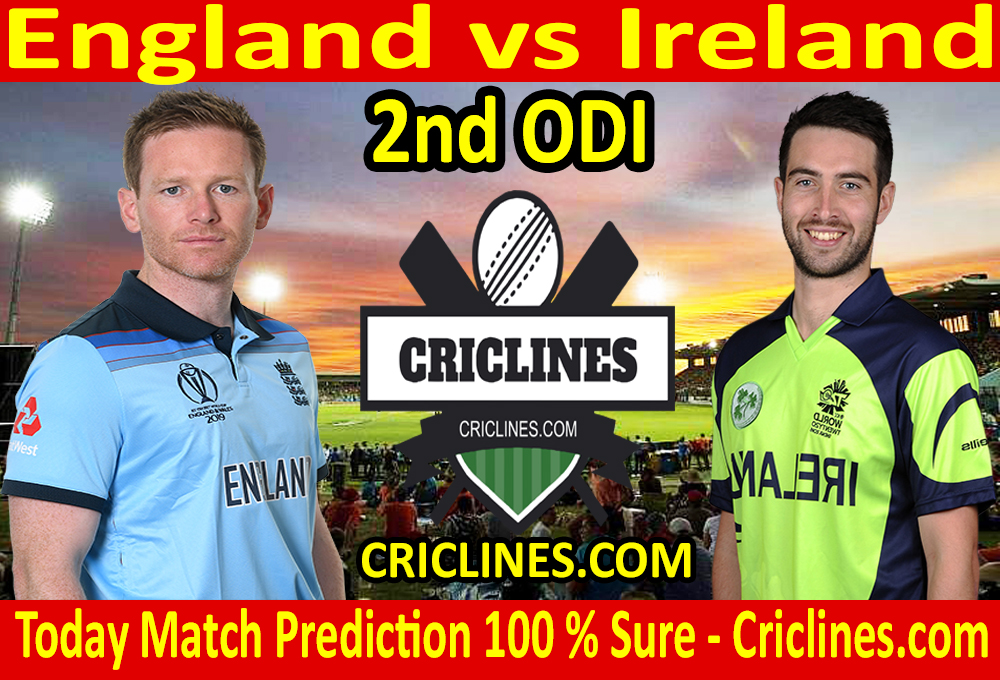 The world is ready to witness yet another big battle of ODI cricket. The 2nd ODI match of Ireland tour of England, 2020 is scheduled to be held on Saturday, 1st August 2020 at The Rose Bowl, Southampton. We are providing 100 safe, perfect, and accurate today match prediction for all matches of England and Ireland.

England had a super start to this series of three ODIs against Ireland and won the first ODI with the margin of six wickets. They won the toss and decided to field first. Their bowling unit had an outstanding performance in that match. They leaked 172 runs and send the all team of back to the pavilion in 44.4 overs. Willey was the most successful and highest wicket-taker from their side who picked five wickets against 30 runs in his 8.4 overs bowled out. Saqib Mahmood also performed well with the ball. He picked two wickets in his nine overs bowled out against 36 runs. Adil Rashid and Tom Curran picked one wicket each while Moeen Ali was the only bowler who failed to get any wicket.

Like the batting, the batting order of England also had an outstanding performance in the first ODI. They chased the target of 174 runs in just 27.5 overs with six wickets in hand. Almost all batsmen from their side put some runs on the board. Sam Billings was the most successful and highest run-scorer from their side who scored 67 runs and remained not out till the chase of the target. He faced 54 deliveries and smashed 11 boundaries during his inning. The skipper, Eoin Morgan also remained not out after scoring 34 runs. He faced 40 deliveries and smashed four boundaries and two huge sixes. Jason Roy scored 24 runs while James Vince had 25 runs to his name.

Ireland failed to have a kick start to this series of three ODIs against England and lost the very first match of this tournament by the margin of six wickets. They lost the toss and were asked to bat first. Their batting order failed to put a big total on the board. They could manage to score 172 runs and be all-out in 44.4 overs. Curtis Campher was the highest run-scorer from their side who scored 59 runs and remained not out. Andy McBrine scored 40 runs with the help of three boundaries and one six.

The bowling unit of Ireland failed to defend the low target of 173 runs and was charged for the target in 27.5 overs. Craig Young was the only successful bowler from their side who picked two wickets in his eight overs bowled out while he was charged for 56 runs. Curtis Campher picked one wicket in five overs against 26 runs while Andy McBrine also picked one wicket in his eight overs bowled out against 47 runs.

England had played a total of 748 ODI matches with 377 wins to their name. They had lost 335 matches while their eight matches were tied and 28 matches were ended with no results.

Ireland had played a total of 157 One Day Internationals. They had won 67 matches and lost 79 matches. Their three matches were tied and eight matches ended with no results.

England had faced Ireland in 11 ODI matches where they won nine while Ireland won just one match. One match between these two teams was ended with no result.

The 2nd ODI match between England and Ireland is going to be played at The Rose Bowl, Southampton. The pitch at this stadium is excellent for batting. The boundaries at this venue are short and will bring the spinners into play. The pitch will continue to be good for batting throughout the match.

Who Will Win England vs Ireland 2nd ODI

Who Will Win England vs Ireland 2nd ODI Match-ENG