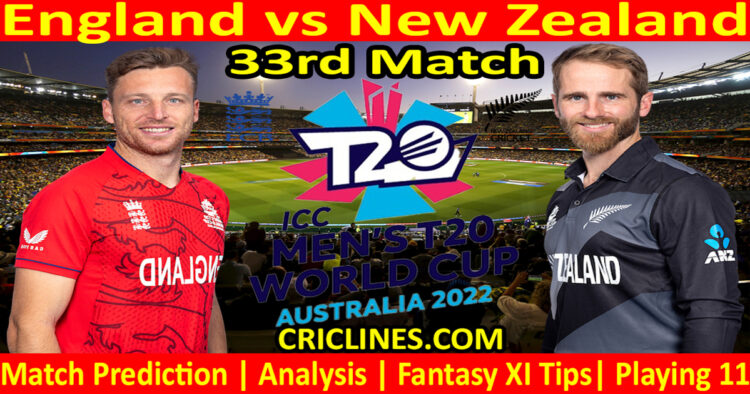 Cricket fans are ready to witness yet another big battle of the World Cup T20. The 33rd match of World Cup T20 2022 is scheduled to play between England and New Zealand on Tuesday, 1st November 2022 at The Gabba, Brisbane. We are posting a safe, accurate, and secure today match prediction of the ICC T20 World Cup 2022.

England had not performed well in this tournament as many of us were expecting. They had played three matches with one win to their name. They lost one match while their one match was washed out by the rain. They are holding the second position on the points table right now. They are tied in points with Ireland and Australia while they are good in net run rate than these two teams.

New Zealand is currently leading the table of Super 12 Group 1 with five points to their name. They had played three matches with two wins while their one match against Afghanistan was abandoned without a ball being bowled due to rain (no toss). They are in good condition to qualify for the semi-finals. Many cricket pundits are predicting that they will win this match and also agree with it.

The most recent match of England was washed out by the rain against Australia after facing a massive upset against Ireland. England has to win this match at any cost to have some chance to qualify for the semi-finals. We have no doubt that England is a strong and experienced team and is rich in batting and bowling. The batting order of England is very strong and is led by Jos Buttler, Alex Hales, Dawid Malan, Ben Stokes, Harry Brook, and Moeen Ali. This batting order is very dangerous and can destroy any strong bowling unit but they were not good in the previous match against Ireland and failed to chase the target of 157 runs. They scored 105 runs in 14.5 overs and were five runs short through the DLS method. Dawid Malan was the most successful and highest run-scorer from their side scoring 35 runs on 37 balls with the help of two boundaries.

Moeen Ali performed well in the most recent completed match against Ireland and scored 24 runs on just 12 balls. He smashed three boundaries and one huge six. Harry Brook scored 18 runs while the skipper, Jos Buttler, Alex Hales, and Ben Stokes failed to give the best performance. The bowling unit of England is also strong. Ben Stokes, Chris Woakes, Mark Wood, Sam Curran, Adil Rashid, and Liam Livingstone are the leading bowlers in the squad of England. They were not good against Ireland where they leaked 157 runs and send the full team of Ireland back to the pavilion in 19.2 overs. Liam Livingstone was the most successful bowler from their side who picked three wickets in three overs against just 17 runs. Mark Wood also picked two wickets while he was charged with 34 runs. Sam Curran picked two wickets while Ben Stokes had one wicket to his name.

New Zealand is coming to this match on the back of a massive win over Sri Lanka in their previous match with a handsome margin of 65 runs. They won the toss and decided to bat first. The performance of their whole batting order was not much impressive but Glenn Phillips was the only batter from their side who put some big runs on the board. He scored in the second century of the ICC T20 World Cup 2022. He scored 104 runs on just 64 balls with the help of 10 boundaries and four huge sixes. Remember that New Zealand scored 167 runs in 20 overs. Daryl Mitchell scored 22 runs while Mitchell Santner scored just 11 runs. No other batter from their side could even enter into the double figure. Finn Allen, Devon Conway, Kane Williamson, and James Neesham were the batters who failed to put some big runs on the board.

The way how the bowling unit of New Zealand performed in the previous match was just outstanding. They defended the target of 168 runs and send the full team of Sri Lanka back to the pavilion in 19.2 overs for a total of 102 runs. Trent Boult was the most successful and highest run-scorer from their side who picked four wickets in four overs against just 13 runs. Mitchell Santner also performed well and picked up two wickets in four overs while he was charged with 21 runs. Ish Sodhi was the other bowler who picked up two wickets in 3.2 overs against 21 runs. Tim Southee and Lockie Ferguson picked one wicket each. New Zealand has good news as their key bowlers and batters are performing well and giving the best performance and we are sure that they will win this match.

England had played 22 matches against New Zealand where they had won 13 matches while New Zealand had won 8 matches. One match between these two teams ended with no result.

The 33rd match of World Cup T20 2022 is going to be held at The Gabba, Brisbane. We had observed in the previous matches played here that the pitch here at this venue is good for batting. The pitch is bouncy and fast and run-scoring is not much easy in early and middle overs. We are hoping that the surface is bound to get slower and be a bit more difficult for batting in this match. A score of 170 is going to be tough to chase.

Alex Hales, Glenn Phillips, and Trent Boult are key players to watch in this match.