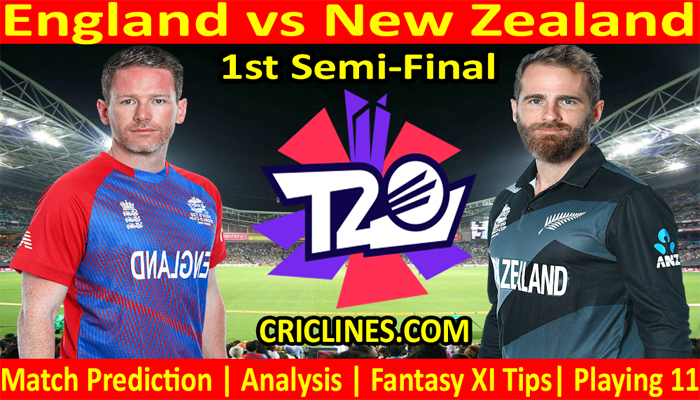 The cricket fans are ready to witness yet another big battle of World Cup T20. The 1st Semi-Final of World Cup T20 2021 is scheduled to play between England and New Zealand on Wednesday, 10th November 2021 at Sheikh Zayed Stadium, Abu Dhabi. We are posting safe, accurate, and secure today match prediction of ICC T20 World Cup free.

We are in the semi-finals stage of ICC T20 World Cup 2021 and now have four teams officially. The 1st semi-final is going to be very interesting as England and New Zealand have decent records in the events of ICC. England is leading group 1 after the end of the group stage matches. They won four out of five matches and South Africa was the only team who beat England. On the other hand, New Zealand is the other team who had won four out of five matches at the group stage.

England had been an unstoppable team in the group stage matches and beat the teams like Australia, Sri Lanka, Bangladesh, and the defending champions, West Indies. Their only loss came against South Africa which was very close where they gave tough time to South Africa. The participation of Jason Roy in this big match has a big question mark. He was injured during fielding in the match against South Africa and if he may not available, this could be a huge loss for the batting order of England. The batting order of England had been just amazing in this tournament in almost all matches they had played.

England has the batting till number eight as Chris Jordan can bat well. Jos Buttler had been just outstanding with the bat and is the second-highest run-scorer of this tournament. He had scored 240 runs in five matches he had played. Moeen Ali, Jonny Bairstow, Dawid Malan, Liam Livingstone, and the skipper, Eoin Morgan are the batters who can destroy the bowling of New Zealand. We have no questions on the bowling unit of England. The conditions in Abu Dhabi are in the favor of spin bowlers where Adil Rashid and Moeen Ali can play a big role in this match. Two or three early wickets in the powerplay overs can restrict New Zealand from scoring a big total on the board.

New Zealand came to the party after losing their match against Pakistan and beat the teams like India, Afghanistan, Namibia, and Scotland. We had seen some best performances in the bowling unit of New Zealand. They restricted the strong batting order of India on 110 runs and Afghanistan on a total of 124 runs. Tim Southee and Trent Boult had been leading this team in this tournament. Other bowlers like Adam Milne, James Neesham, Mitchell Santner, and Ish Sodhi can also be effective in the conditions of Abu Dhabi.

New Zealand is a team that had a strong and well-balanced batting order on their side. Martin Guptill and Daryl Mitchell are the leading batters of New Zealand. Martin Guptill had scored 176 runs in this tournament. Daryl Mitchell had scored 125 runs while Kane Williamson scored 126 runs in the last five matches. James Neesham, Devon Conway, and Glenn Phillips are available to handle the top and middle batting order of this team.

England had faced New Zealand in 21 T20 International matches where they had won 13 while New Zealand had won 7 matches. One match between these two teams was ended with no result.

Adil Rashid, Jos Buttler, and Trent Boult are the key players to watch in this match.

The 1st Semi-Final of World Cup T20 2021 is going to be held at Sheikh Zayed Stadium, Abu Dhabi. We had observed in the previous matches played here that the pitch here at this venue is good for batting. The track is slower than the others we have seen and helps the spinners quite a bit. We are hoping that the surface is bound to get slower and be a bit more difficult for batting in this match. A score of 170 is going to be tough to chase.

Who Will Win England vs New Zealand, 1st Semi-Final WTC 21