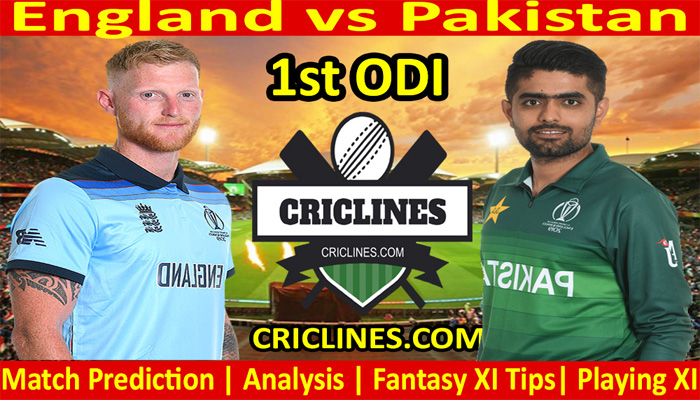 The cricket fans are ready to witness yet another big battle of ODI cricket. The 1st ODI match of the Pakistan tour of England, 2021 is scheduled to be held on Thursday, 8th July 2021 at Sophia Gardens, Cardiff. We are providing 100 safe, perfect, and accurate today match prediction for all matches of England and Pakistan.

England team is facing problems before the start of this home series against Pakistan. Seven members of England including three players had been tested COVID positive and the whole squad of England had been put under isolation. England had picked new players from the ongoing T20 blast and for the first time in the history of England cricket, near about nine players are going to debut in this home series. Ben Stokes had been given the responsibility to lead the team in the ODI series.

We had mentioned above that the new players in England team had been picked from Vitality T20 Blast and they had played a lot of cricket in recent time. Till the announcement of the squad, it is difficult for us to know about the final playing eleven for the first match. We think that Will Jacks and Phil Salt can get a chance in the final playing eleven while Will Jacks will have to wait for the selection. Dawid Malan, James Vince, Zak Crawley, Dan Lawrence, Ben Stokes, Ben Duckett, Lewis Gregory, Brydon Carse are sure to get the place in the final squad for the first ODI match as per our opinion.

Mohammad Rizwan had been outstanding in the recent season of the Pakistan Super League and we are sure that he will continue his good form in this series. Fakhar Zaman Sohaib Masood, Haris Sohail, Saud Shakeel, and Shadab Khan can bat well till number 7th. Imam ul Haq is also part of the squad of the ODI team of Pakistan but we don’t think that he will get a place in the final playing eleven. Faheem Ashraf is the ideal player for batting at number eight. The bowling department of Pakistan is strong and experienced at least on papers which are led by Hasan Ali, Haris Rauf, and Shaheen Afridi.

England had played a total of 759 ODI matches with 382 wins to their name. They had lost 340 matches while their eight matches were tied and 29 matches were ended with no result.

Pakistan had played 933 One Day Internationals. They had won 490 matches and lost 415 matches. Their 20 matches ended with no results and eight matches were tied.

England had faced Pakistan in 88 ODI matches where they won 53 while Pakistan won 32 matches. Two matches between these two teams were ended with no result.

The 1st ODI match between England and Pakistan is going to be played at Sophia Gardens, Cardiff. The pitch at this stadium is excellent for batting. The boundaries at this venue are short and will bring the spinners into play. The pitch will continue to be good for batting throughout the match.

The weather forecast in Cardiff on match day is not very good. There are some chances of rain but and that is possible that we may have an interrupted match.

Who Will Win England vs Pakistan 1st ODI

Who Will Win England vs Pakistan 1st ODI Toss-ENG

Who Will Win England vs Pakistan 1st ODI Match-ENG