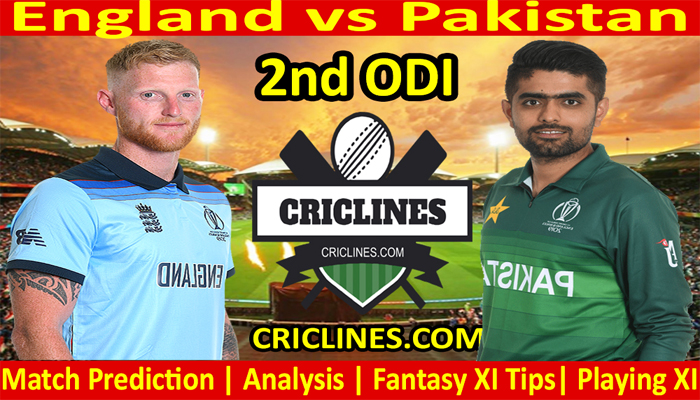 The world is ready to witness yet another big battle of ODI cricket. The 2nd ODI match of Pakistan tour of England, 2021 is scheduled to be held on Saturday, 10th July 2021 at Lord’s, London. We are providing 100 safe, perfect, and accurate today match prediction for all matches of England and Pakistan.

England changed their complete playing eleven for the first time in history and they won the 1st ODI match against Pakistan with a handsome margin of nine wickets. They won the toss and decided to field first. The performance of their bowling department was just outstanding. They destroyed the batting order of Pakistan. Saqib Mehmood started the bowling inning for England with two wickets in his very first over and the rest of the bowling department followed it. They sent the all team of Pakistan back to the pavilion on a total of just 141 runs in 35.2 overs. Saqib Mahmood picked a total of four wickets in his 10 overs bowled out against 42 runs. Craig Overton and Matthew Parkinson picked two wickets each while Lewis Gregory had one wicket to his name.

The batting order of England also had an outstanding performance as many of us were not expecting. They chased the target of 142 runs in 21.5 overs. Dawid Malan finally got his form back in the 1st ODI and scored 68 runs with the help of eight boundaries. He remained not out till the chase of the target. Zak Crawley also had an outstanding performance with the bat. He also remained not out after scoring 58 runs. He faced 50 balls and smashed seven boundaries during his inning. Philip Salt could manage to score seven runs.

We think that the overconfidence of team Pakistan caused their first loss. They took the new team of England very easy and the result we know. The batting order of Pakistan almost collapsed in the 1st match. After losing two key wickets in the very first over, they failed to settle on the pitch and except for Fakhar Zaman and Shadab Khan, no other batsmen from Pakistan’s side could put some big runs on the board. We don’t think that Pakistan will change the final playing eleven in this match. Imam ul Haq will get another chance to open the inning as his record in England is good.

Fakhar Zaman showed some kind of world-class batting in the first match while we know that Babar Azam is a world-class batsman and he also has a good record while playing in England. Pakistan’s team has to score near about 300 runs if they get the chance of batting first. Otherwise, the result will be the same as the 1st ODI. Shaheen Afridi was good with the new ball in the 1st match but he failed to get the support of any bowler. Faheem Ashraf, Hasan Ali, Haris Rauf, and Shadab Khan have to give the best performance in this match to change the result of the match.

England had played a total of 760 ODI matches with 383 wins to their name. They had lost 340 matches while their eight matches were tied and 29 matches were ended with no result.

Pakistan had played 934 One Day Internationals. They had won 490 matches and lost 416 matches. Their 20 matches ended with no results and eight matches were tied.

England had faced Pakistan in 89 ODI matches where they won 54 while Pakistan won 32 matches. Two matches between these two teams were ended with no result.

The 2nd ODI match between England and Pakistan is going to be played at Lord’s, London. The pitch at this stadium is excellent for batting. The boundaries at this venue are short and will bring the spinners into play. The pitch will continue to be good for batting throughout the match.

The weather forecast in London on match day is not very good. There are some chances of rain but and that is possible that we may have an interrupted match.

Who Will Win England vs Pakistan 2nd ODI

Who Will Win England vs Pakistan 2nd ODI Toss-PAK

Who Will Win England vs Pakistan 2nd ODI Match-ENG