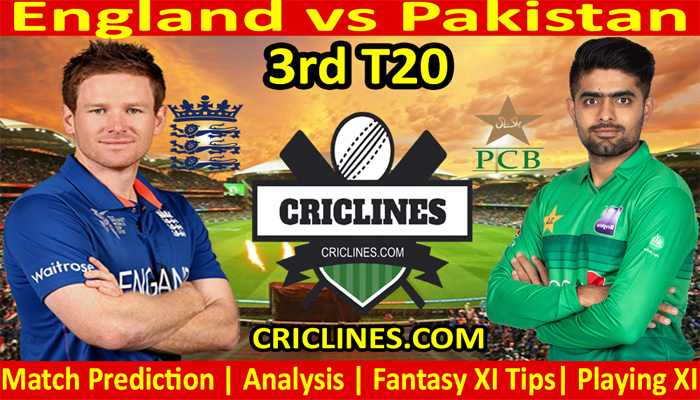 The cricket fans are ready to witness yet another big battle of T20 cricket. The 3rd T20 match of the Pakistan tour of England, 2021 is scheduled to be held on Tuesday, 20th July 2021 at Emirates Old Trafford, Manchester. We are providing 100 safe, perfect, and accurate today match prediction for all matches of England and Pakistan.

The series of three T20 matches between England and Pakistan is leveled with 1-1 as England won the 2nd match quite easily. This match will decide the winner of the T20 series. Pakistan played with the same team in the 2nd match while England made several changes. It looks that England is trying different players to get the best combination for T20 World Cup.

England won the second T20 match with a handsome margin of 45 runs where they selected Chris Jordan, Adil Rashid, and Jos Buttler. These all players proved their selection right. England lost the toss and was asked to bat first. The performance of the batting order of England was good in that match. They scored a total of 200 runs in their 20 overs inning. Jos Buttler was the highest run-scorer from their side who scored 59 runs on 39 deliveries with the help of seven boundaries and two sixes. Liam Livingstone scored 38 runs while Moeen Ali scored 36 runs.

The bowling department of England also performed well and defended the target of 201 runs. They leaked 155 runs in their inning of 20 overs. Saqib Mahmood was the highest wicket-taker from their side who picked three wickets in his four overs bowled out against 33 runs. Adil Rashid also performed well with the ball and picked two wickets in his four overs bowled out while he was charged for 30 runs. Moeen Ali was the other bowler who picked two wickets while Tom Curran and Matthew Parkinson picked one wicket each.

Pakistan failed to continue the momentum that they got from the 1st T20 match and lost the 2nd match by a handsome margin of 45 runs. The bowling unit of Pakistan once again failed to give the best performance in the second match and they leaked 200 runs in 20 overs. Mohammad Hasnain was the highest wicket-taker from their side but he leaked plenty of runs. He picked three wickets while he was charged for 51 runs in his four overs bowled out. Haris Rauf and Imad Wasim picked two wickets each while Shaheen Afridi and Shadab Khan picked one wicket each.

The batting order of Pakistan collapsed even after having a good start. They failed to chase the target of 201 runs and scored 155 runs in their inning of 20 overs. Mohammad Rizwan was the highest run-scorer from their side who scored 37 runs with the help of three boundaries and one six. Shadab Khan also had an outstanding performance with the bat. He smashed the inning of 36 runs on just 22 balls. The skipper, Babar Azam scored 22 runs and Imad Wasim scored 20 runs.

England had played a total of 136 T20 matches with 72 wins to their name. They had lost 59 matches while their five matches were ended with no result.

Pakistan had played 172 T20 Internationals. They had won 106 matches and lost 64 matches. Their 2 matches ended with no results.

England had faced Pakistan in 20 T20 matches where they won 13 while Pakistan won 7 matches. One match between these two teams was ended with no result.

The 3rd T20 match between England and Pakistan is going to be played at Emirates Old Trafford, Manchester. The pitch at this stadium is excellent for batting. The boundaries at this venue are short and will bring the spinners into play. The pitch will continue to be good for batting throughout the match.

The weather forecast in Manchester on match day is not very good. There are some chances of rain but and that is possible that we may have an interrupted match.

Babar Azam is in superb form and while Hasan Ali has a good record while playing in England. Saqib Mehmood had performed well in the ODI series from England. Jonny Bairstow is also in superb form. These players will be key to watch in this match.

Who Will Win England vs Pakistan 3rd T20

Who Will Win England vs Pakistan 3rd T20 Toss-PAK

Who Will Win England vs Pakistan 3rd T20 Match-ENG

Q. Who will win this match?

Q. Who will win the toss today?