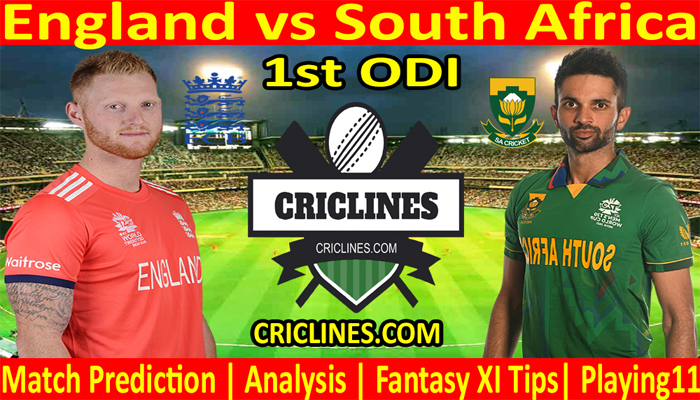 The cricket fans are ready to witness yet another big battle of ODI cricket. The 1st ODI match of the South Africa tour of England, 2022 is scheduled to be held on Tuesday, 19th July 2022 at Riverside Ground, Chester-le-Street. We are providing 100 safe, perfect and accurate today match prediction of England vs South Africa.

South Africa is going to start the tour of England with this ODI match and this is a long tour they will play three ODIs, three T20s, and the same test matches. This ODI series is not very important as this series is not the part of ODI Super League. England was not good in the recent home series against India but today prediction of this match is confirming that England is favorite to win this match.

Joe Root will come for the batting at number three. He was not impressive against India but we are sure that he will have a big impact in this series. We all know that the batting order of England is strong and experianced. Jos Buttler, Moeen Ali, and Liam Livingstone are also the part of the batting squad of England. We are sure that the batters of England will hit more sixes in his match than South Africa. The bowling department of England was a bit underwhelming in the recent series against India. Reece Topley will be leading the bowling department with Adil Rashid, and Sam Curran while Moeen Ali will also be used as bowler in the middle overs.

South Africa is on the tour of England after a long time and this series is very important for this team. They will be tested against a strong team of white ball. The focus of both teams will on the T20 series as T20 World Cup is not very far and the preperations of almost all teams are in the final round. It will also dificult for South Africa to play against a team that had been busy for 11 out of 18 days of July. Quinton de Kock was facing some issues with his finger but this is a good news for South Africa that he is fit and will available for this match.

South Africa will play this match with the full force of batting and bowling. Janneman Malan, Quinton de Kock, Rassie van der Dussen, Aiden Markram, Heinrich Klaasen, and David Miller are the key batters of South Africa and we are sure that these all batters will get a chance to play this match. The bowling department of South Africa is also experianced but we think that they will face issues to set on the conditions of England. Andile Phehlukwayo, Keshav Maharaj (c), Anrich Nortje, Lungi Ngidi, and Tabraiz Shamsi will be the part of the final playing XI for this match.

England had played a total of 767 ODI matches so far. They won 388 matches while other teams won 342 matches. 29 matches of England were ended with no result and one match was tied and eight matches of this team were tied.

South Africa had played 641 ODI matches right now with 392 wins to their name while they had lost 223 matches. Their 20 matches were ended with no result and 6 matches were tied.

The toss is going to play an important role in decision of each and every match of this series. According to toss prediction, the team who will win the toss may elect to bat first.

The 1st ODI Match match between England and South Africa is going to be played at Riverside Ground, Chester-le-Street. The pitch at this stadium is excellent for batting. The boundaries at this venue are short and will bring the spinners into play. The pitch will continue to be good for batting throughout the match. A total of 190 can be dificult for batting second to chase.

The weather forecast in Chester-le-Street on match day is good for a cricket match. There are some chances of rain but and that is possible that we may have an intruppted match.

Who Will Win England vs South Africa 1st ODI Match

We had provided you with the above-mentioned today prediction on the basis of our research, understanding, and analysis. You can consider the point we had provided you and finally, the final decision will be yours.