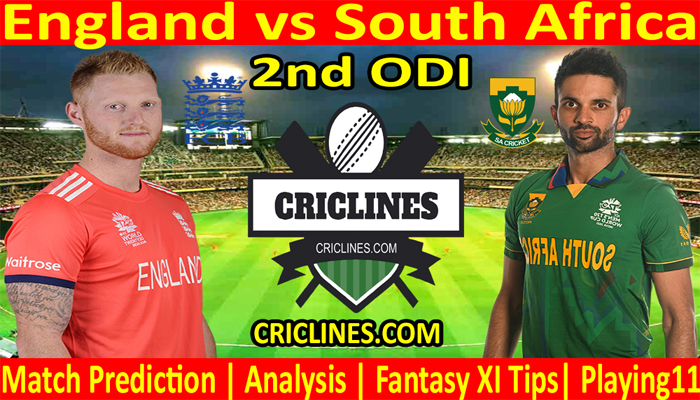 The world is ready to witness yet another big battle of ODI cricket. The 2nd ODI match of the South Africa tour of England, 2022 is scheduled to be held on Friday, 22nd July 2022 at Emirates Old Trafford, Manchester. We are providing 100 safe, perfect, and accurate today match prediction of England vs South Africa.

England started this home series against South Africa as a favorite team but they repeated the performance as they were against India. They lost the opening ODI by a huge margin of 62 runs. The batting and bowling departments of England totally failed to give the best performance in the first ODI match. On the other side, South Africa had a winning start to this tour of England and they will be full of confidence for this match. South Africa is a good form and this match is going to be very interesting as both teams will try to win this match. Today prediction of this match is in the favor of England.

The bowling department of England was not impressive in the first match and they leaked 333 runs in 50 overs. Sam Curran, Matty Potts, Moeen Ali, Brydon Carse, Ben Stokes, Adil Rashid, and Liam Livingstone were used as bowlers in the first match. Liam Livingstone was the most successful bowler in the first match with two wickets to his name in four overs against 30 runs. Brydon Carse, Moeen Ali, and Sam Curran picked one wicket each while Matty Potts, Adil Rashid, and Ben Stokes were the bowlers who could not manage to pick any wicket. The above-mentioned bowlers are experienced and they have to give the best performance otherwise, they will lose the series.

England has a strong batting order in the squad and they were good in the first match but could not chase the target of 334 runs their full team came back to the pavilion in 46.5 overs on a total of just 271 runs. Joe Root was the most successful and highest run-scorer with 86 runs to his name on 77 balls with the help of five boundaries and two huge sixes. Jonny Bairstow also performed well and scored 63 runs. He faced 71 balls and smashed seven boundaries during his inning. Jason Roy was the other batter who was good with the bat. He scored 73 runs. Ben Stokes, Jos Buttler, and Liam Livingstone are the other batters in the squad of England. Remember that Ben Stokes had retired from ODI cricket and the previous ODI was his final ODI match.

No one of us was expecting that South Africa will play so well in the first match as they did. The way how their batting order performed in the first match was just outstanding. They put a big total of 333 runs on the board in their 50-over inning. Almost all batters from their side put some runs on the board. Janneman Malan and de Kock are opening the batting inning with van der Dussen, Markram, David Miller, Klaasen, and Phehlukwayo available to handle the middle and lower batting order. van der Dussen was the highest run-scorer in the previous match who scored a century. He scored a total of 134 runs on 117 balls and smashed 10 boundaries during his inning. Aiden Markram was the other batter who was just good with the bat.

Aiden Markram scored 77 runs while the opening batter, Janneman Malan scored 57 runs. David Miller remained not out after scoring 24 runs. The performance of the bowling department of South Africa was not impressive but they defended the target of 334 runs and send the full team of England back to the pavilion on a total of 271 runs in 46.5 overs. Keshav Maharaj, Lungi Ngidi, Anrich Nortje, Tabraiz Shamsi, Andile Phehlukwayo, Aiden Markram, and Dwaine Pretorius were the bowlers in the squad of South Africa. Anrich Nortje was the most successful bowler in the previous match with four wickets to his name in 8.5 overs against 53 runs. Aiden Markram and Tabraiz Shamsi picked two wickets each while Lungi Ngidi and the skipper, Keshav Maharaj picked one wicket each.

England had played a total of 768 ODI matches so far. They won 388 matches while other teams won 343 matches. 29 matches of England were ended with no result and one match was tied and eight matches of this team were tied.

South Africa had played 642 ODI matches right now with 393 wins to their name while they had lost 223 matches. Their 20 matches ended with no result and 6 matches were tied.

The 2nd ODI Match match between England and South Africa is going to be played at Emirates Old Trafford, Manchester. The pitch at this stadium is excellent for batting. The boundaries at this venue are short and will bring the spinners into play. The pitch will continue to be good for batting throughout the match. A total of 190 can be difficult for batting second to chase.

The weather forecast in Manchester on match day is good for a cricket match. There are some chances of rain but that is possible that we may have an interrupted match.

Who Will Win England vs South Africa 2nd ODI Match