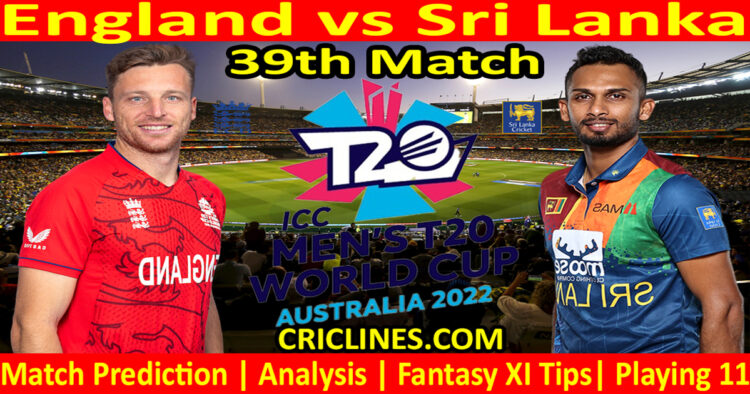 Cricket fans are ready to witness yet another big battle of the World Cup T20. The 39th match of World Cup T20 2022 is scheduled to play between England and Sri Lanka on Saturday, 5th November 2022 at Sydney Cricket Ground, Sydney. We are posting a safe, accurate, and secure today match prediction of the ICC T20 World Cup 2022.

England had played a total of four matches with two wins to their name. They had lost one match while their one match was washed out by the rain. They are currently holding the second position on the points table. They are equal in the points with table topper New Zealand and third position holder Australia. England not only has to win this match with a handsome margin of to improve the net run rate.

Sri Lanka is the other team that had played four matches in the super 12. They had won two and also lost two matches. They are in the fourth position on the points table. We don’t think that they have any chance to qualify for the semi-finals. Two out of three teams between England, Australia, and New Zealand will qualify for the playoff. Sri Lanka had beaten Afghanistan in their most recent match.

England had beaten the strong team of this tournament, New Zealand in their most recent match with a handsome margin of 20 runs. They won the toss and decided to bat first. They scored a total of 179 runs in 20 overs. The top batting order of England performed well but their middle and lower batting order totally failed to give the best performance. Remember that just three batters of England could cross a double figure. The skipper, Jos Buttler was the most successful and highest run-scorer from their side scoring 73 runs on 47 balls with the help of seven boundaries and two huge sixes. Alex Hales also performed well and put some big runs on the board. He scored 52 runs while he faced 40 balls and smashed seven boundaries and one huge six. Liam Livingstone scored 20 runs while the other big names of England like Moeen Ali, Harry Brook, and Ben Stokes were the batters who failed to put some big runs on the board.

England won the previous match due to the best and most outstanding performance by their bowling unit. They defended the target of 180 runs and leaked 159 runs in 20 overs. Remember that they used seven bowlers in the previous match. Sam Curran was the most successful bowler from their side who picked wickets in four overs against 26 runs. Chris Woakes also picked two wickets while he was charged with 33 runs in four overs. Mark Wood also performed well and picked one wicket in three overs while he was charged with 25 runs. Ben Stokes was the other bowler who had a wicket to his name. He also picked one wicket in just one over while he was charged with 10 runs. Moeen Ali, Adil Rashid, and Liam Livingstone were the bowlers who failed to pick any wicket. The batting order of England is performing well in this tournament while their bowling unit is also doing the best. They should continue their good form in the next important matches.

Sri Lanka had beaten Afghanistan in their most recent match with a handsome margin of six wickets. They lost the toss and were asked to bat first. The way how their bowling unit performed in the previous match was just outstanding. They leaked 144 runs in 20 overs. Almost all bowlers from their side performed well in the previous match. W Hasaranga was the most successful and highest wicket-taker from their side who picked three wickets in four overs against just 13 runs. Lahiru Kumara also had an outstanding performance with the ball and picked up two wickets in four overs against just 30 runs. Kasun Rajitha also performed well and picked one wicket in four overs against 31 runs. Dhananjaya de Silva was the other bowler with a wicket to his name. He picked one wicket in one over against nine runs.

Pramod Madushan and M Theekshana were the bowlers who failed to pick any wicket in the previous match. The batting order of Sri Lanka also performed well in the previous match and chased the target of 145 runs in 18.3 overs. Dhananjaya de Silva was the most successful and highest run-scorer from their side who remained not out after scoring 66 runs on 42 balls with the help of six boundaries and two huge sixes. Kusal Mendis also performed well and scored 25 runs. He faced 27 balls and smashed two boundaries and one huge six. Bhanuka Rajapaksa scored 18 runs while Charith Asalanka had 19 runs to his name. Pathum Nissanka scored 10 runs. This match is a big test for Sri Lanka as they are going to face a strong and experienced team in this match. We think that Sri Lanka will give a tough time to England in this match.

England had played 13 T20 matches against Sri Lanka where they had won nine while Sri Lanka had won four matches.

The 39th match of World Cup T20 2022 is going to be held at Sydney Cricket Ground, Sydney. We had observed in the previous matches played here that the pitch here at this venue is good for batting. The pitch is bouncy and fast and run-scoring is not much easy in early and middle overs. We are hoping that the surface is bound to get slower and be a bit more difficult for batting in this match. A score of 170 is going to be tough to chase.

Alex Hales, Jos Buttler, and W Hasaranga are key players to watch in this match.

We had provided you above-mentioned today match prediction on the basis of our research, understanding, and analysis. You can consider the point we provided you and the final decision will be yours that you have to make at your own risk.