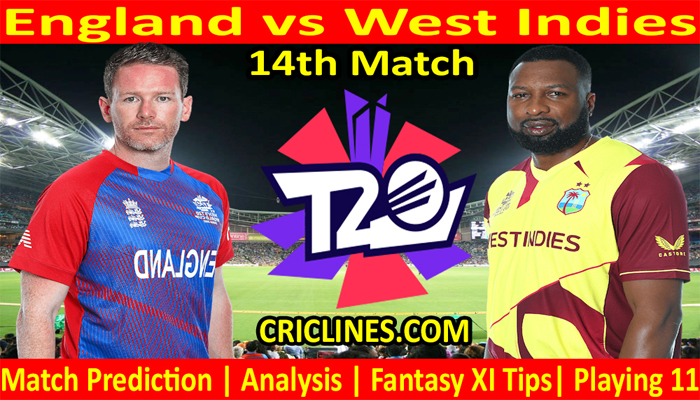 The cricket fans are ready to witness yet another big battle of World Cup T20. The 14th Match of World Cup T20 2021 is scheduled to play between England and West Indies on Saturday, 23rd October 2021 at Dubai International Cricket Stadium, Dubai. We are posting safe, accurate, and secure today match prediction of ICC T20 World Cup free.

England is a strong team and had played well in both warmup matches even they lost one match against India. This team has a strong batting order in their squad and they have the batting till number eight but there is some confusion which may be clear when they announce the final playing eleven for this match. Can David Malan get a place in playing eleven? What is the position where Jonny Bairstow will be batting? these are the main questions that need to answer.

In our opinion, Eoin Morgan will play this match even he may be under pressure. Jonny Bairstow will bat in the middle order and Moeen Ali will replace Dawid Malan. Jose Buttler and Jonny Bairstow are in superb form as we have observed in the warmup matches. Both players can be dangerous for the bowling department of the West Indies. England has some world-class bowlers in their squad. Adil Rashid, Liam Livingstone, Tymal Mills, and Mark Wood are the key bowlers while Chris Jordan can also get a place in the final playing eleven as he is known as the best bowler in the middle overs. England have also options to choose the best bowlers from David Willey, Tom Curran, or Chris Woakes.

West Indies is a dangerous and un consistent team when it comes to the T20 format of cricket. They had lost their both warmup matches. We saw the West Indies were not interested in the warmup matches. We know that the batting order of the West Indies is very dangerous. They have some hard hitters in their team like Kieron Pollard, Shimron Hetmyer, Andre Russell, Chris Gayle, Evin Lewis, and Nicholas Pooran and we are sure that these all players will be part of the playing eleven for this match.

We think that there is no team that may compare with the six-hitting batting order of West Indies that we had mentioned above. The bowling department of West Indies is good but not strong. Hayden Walsh and Akeal Hossain are part of the squad of this team as spin bowlers and both bowlers can be helpful in the conditions of Dubai. Kieron Pollard can also use as a bowler in this match. Ravi Rampaul, Obed McCoy, Dwayne Bravo, and Andre Russell are also available for bowling.

Jonny Bairstow, Jose Buttler, and Kieron Pollard are key players to watch in this match.

The 14th Match of World Cup T20 2020-21 is going to be held at Dubai International Cricket Stadium, Dubai. We had observed in the previous matches played here that the pitch here at this venue is good for batting. The track is slower than the others we have seen and helps the spinners quite a bit. We are hoping that the surface is bound to get slower and be a bit more difficult for batting in this match. A score of 170 is going to be tough to chase.

Who Will Win England vs West Indies, 14th Match WTC 21