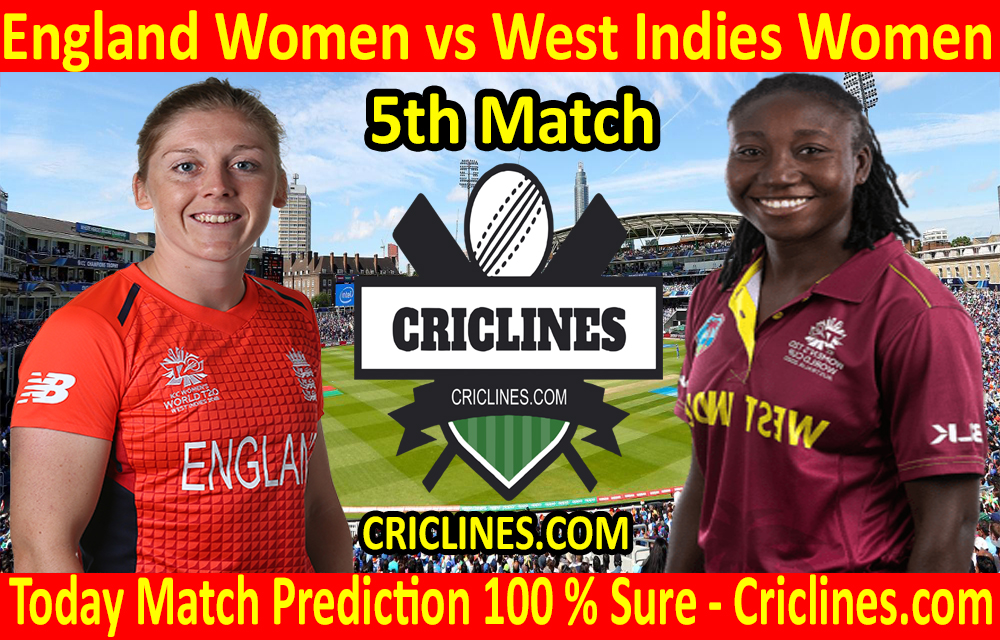 The world is ready to witness yet another big battle of Women T20 cricket. The 5th T20 match of West Indies Women tour of England, 2020 is scheduled to be held on Wednesday, 30th September 2020 at County Ground, Derby. We are providing 100 safe, perfect, and accurate today match prediction for all matches of England Women and West Indies Women.

The performance of the England Women team had been outstanding in this series against West Indies. They had won all four matches played so far. They won the most recent match with a margin of 44 runs. They won the toss and decided to bat first. The performance of their batting order was just outstanding. They scored 166 runs in their inning of 20 overs. A Jones was the highest run-scorer from their side who scored 55 runs on 35 balls with the help of five boundaries and two sixes. The skipper, H Knight scored 42 runs and Beaumont scored 27 runs. K Brunt remained not out after scoring 25 runs. The bowling unit of England also performed well in the previous match. They defended the target of 167 runs and leaked 122 runs in their inning of 20 overs. Katherine Brunt and Sarah Glenn picked two wickets each while Natalie Sciver and Sophie Ecclestone picked one wicket each.

West Indies Women’s team failed to give their good performance in this series. They had lost four matches played so far and now have a threat of whitewash. They lost the previous match by the margin of 44 runs. They lost the toss and were put into the field first. Their bowling unit almost failed to give their best performance in that match. They were charged for 166 runs in their inning of 20 overs. Aaliyah Alleyne was the only successful bowler from their side who picked two wickets in her four overs bowled out against 25 runs. Shamilia Connell, K Ramharack, and Hayley Matthews picked one wicket each. The batting order of West Indies once again failed to perform well in the previous match. They could manage to score 122 runs while chasing the target of 167 runs. Chaldean Nation was the highest run-scorer from their side who scored 30 runs.

The 5th T20 match between England Women and West Indies Women are going to be played at County Ground, Derby. The pitch at this stadium is excellent for batting. The boundaries at this venue are short and will bring the spinners into play. The pitch will continue to be good for batting throughout the match.