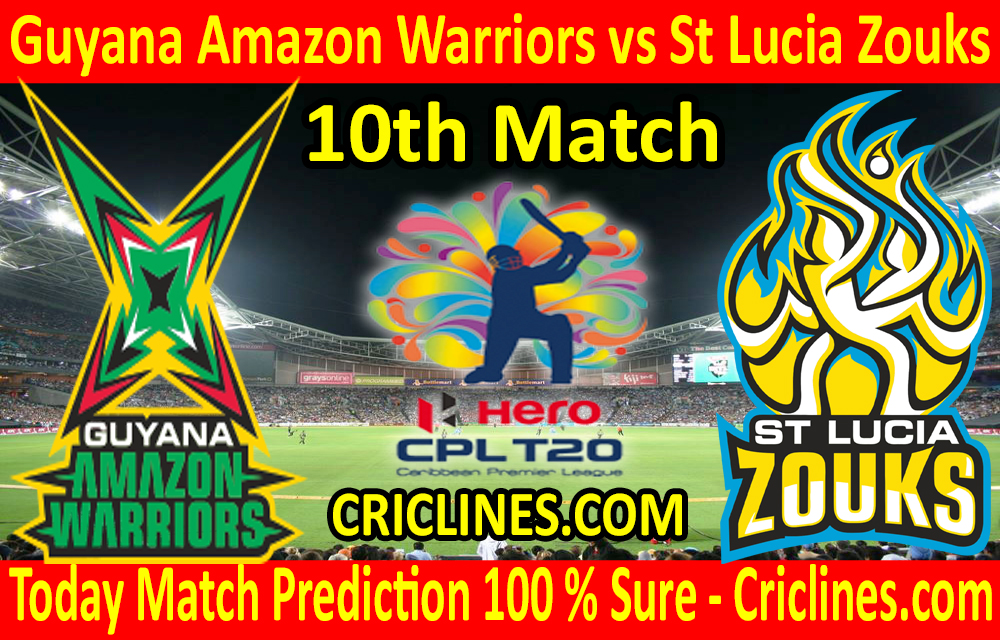 The cricket fans are ready to witness yet another big battle of the Caribbean Premier League. The 10th Match match of CPL 2020 is scheduled to play between Guyana Amazon Warriors and St Lucia Zouks on Sunday, 23rd August 2020 at Brian Lara Stadium, Tarouba, Trinidad. We are posting safe, accurate, and secure today match prediction for all matches of CPL free.

Guyana Amazon Warriors had performed average in his season of the Caribbean Premier League. They had played a total of two matches with one win and other losses. They are holding the second position on the points table right now. They were beaten by Trinbago Knight Riders in their first match of this tournament by the margin of four wickets. That was a rain-affected match and was reduced to 17 overs per side. After losing the first match, they made their comeback and won the second match against St Kitts and Nevis Patriots with the margin of three wickets. They won the toss and decided to field first. The way how their bowling unit performed in that match was just outstanding. They leaked 127 runs in their inning of 20 overs. Keemo Paul was the most successful and highest wicket-taker from their side who picked key four wickets in his four overs bowled out against just 19 runs. Imran Tahir also performed well with the ball. He picked two wickets in his four overs bowled out while he was charged for 18 runs. The skipper, Chris Green picked one wicket while Naveen-ul-Haq and Romario Shepherd failed to pick any wicket in the previous match.

While we look at the batting performance Guyana Amazon Warriors, it was not impressive in the previous match. They chased the target of 128 runs in 17 overs but lost key seven wickets. Almost all batsmen from their side failed to give their best except for Shimron Hetmyer. He was the most successful and highest run-scorer from their side who put a total of 71 runs on the board. He faced just 44 deliveries and smashed eight boundaries and three maximum sixes. Chandrapaul Hemraj could manage to score 19 runs while Brandon King and Sherfane Rutherford scored 10 runs each. Ross Taylor had nine runs to his name while Romario Shepherd remained not out after scoring 4 runs. The bowling unit of Guyana Amazon Warriors is strong and is in excellent form but their batting order is still struggling. To compete with the strong teams of this edition of CPL, the batting order of the Warriors must fire.

The performance of St Lucia Zouks had been average in this tournament. They had played a total of two matches with one win and the other lost. They are holding the third position on the points table. After losing their very first match of this season of Caribbean Premier League against Jamaica Tallawahs, they won the second match against Barbados Tridents by the margin of 7 wickets in a match that was rain-affected and was decided through the DLS method. They lost the toss and were asked to field first. The performance of their bowling unit was impressive. They leaked 131 runs in 18.1 overs bowled out when the rain came in. There was an interesting thing in that match that Zouks used eight bowlers in that match. Roston Chase was the most successful bowler from their side who picked two wickets in his two overs bowled out while he was charged for just 8 runs. Scott Kuggeleijn also picked two wickets in his 3.1 overs bowled out against 28 runs. Kesrick Williams, Mark Deyal, and Mohammad Nabi picked one wicket each in the previous match. Obed McCoy, Saad Bin Zafar, and Rahkeem Cornwall were the bowlers who failed to get any wicket.

At the startup of this tournament, everyone was thinking that St Lucia Zouks will not be able to give their best performance in this season of CPL but the way how Darren Sammy is using his bowlers and batsmen on the field is just outstanding as we observed in the previous match. It was due to his good captaincy that they were good in the previous match. They were given the target of 47 runs in five overs to chase. The way how their batting order performed in that match was good. They chase the target of 47 runs in 4.1 overs. Andre Fletcher was the most successful and highest run-scorer from their side who scored 16 runs on just 7 deliveries with the help of two boundaries and one six. Mohammad Nabi also performed well with the bat. He smashed the inning of 15 runs on just six deliveries with the help of one boundary and the same six. Rahkeem Cornwall scored 14 runs on eight deliveries with the help of three boundaries.

The 10th Match match of the Caribbean Premier League is going to be played at Brian Lara Stadium, Tarouba, Trinidad. We had observed in the previous matches played here that the pitch here at this venue is good for batting. The track is slower than the others we have seen and helps the spinners quite a bit. We are hoping that the surface is bound to get slower and be a bit more difficult for batting in this match. A score of 185 is going to be tough to chase.

Dream11 fantasy team lineup prediction for Guyana Amazon Warriors vs St Lucia Zouks 10th Match match CPL 2020. After checking the latest players’ availability, which players will be part of both teams, he possible tactics that the two teams might use as we had leaned from previous seasons of the Caribbean Premier League to make the best possible Dream11 team.