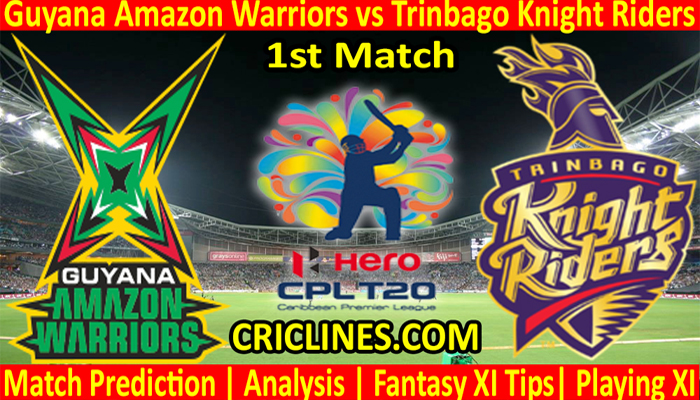 The world is ready to witness yet another big battle of the Caribbean Premier League T20. The 1st Match match of CPL T20 2021 is scheduled to play between Guyana Amazon Warriors and Trinbago Knight Riders on Thursday, 26th August 2021 at Warner Park, Basseterre, St Kitts. We are posting safe, accurate, and secure today match predictions for all matches of CPL free.

Guyana Amazon Warriors was the second-best performing team of the previous season of the CPL T20. They won six out of ten matches played at the league stage. They lost four matches and were holding the second position on the points table but they were beaten by St Lucia Zouks in the second semi-final match by the margin of 10 wickets.

The batting order of Guyana Amazon Warriors is strong and experienced for this edition of CPL. The batsmen like Nicholas Pooran, Brandon King, and Shimron Hetmyer will be leading the batting order of GAW. Remember that Brandon King was the highest run-scorer in the previous season. Mohammad Hafeez and Shoaib Malik are also part of the squad of this team which gives extra power in the batting. Kevin Sinclair, Romario Shepherd, Imran Tahir, and Naveen ul Haq will be handling the bowling unit of the Warriors.

Trinbago Knight Riders will be defending their title of CPL. They were the best performing team of the last season of the Caribbean Premier League. They were the only team who did not lose any match and they won ten out of ten matches played at the league stage. They were leading the points table after the league stage matches were ended. They beat Jamaica Tallawahs in the semi-final 1 match and won the final match against Saint Lucia Kings.

Trinbago Knight Riders had picked the best players of the T20 format of cricket for this edition of the CPL T20. The batting order of this team is strong at least on papers. Kieron Pollard, Darren Bravo, Tim Seifert, Lendl Simmons, and Colin Munro are the key batters of this team. Lendl Simmons was in the best form in the matches he played for West Indies but he got injured. Darren Bravo and Kieron Pollard are the players who can win the match at any stage. Like the batting, the bowling department of TKR is also strong. Sunil Narine, Jayden Seales, Ali Khan, and Yasir Shah are the key bowlers while Kieron Pollard can also bowl in the middle overs.

Trinbago Knight Riders are full of experienced and young players of the t20 format and performed well in the previous editions of CPL. The batting order of this team is also strong and some well-known hitter of t20 format is the part of the squad of this team, so the winning chances of today match for Trinbago Knight Riders have been increased. The equation of who will win today’s cricket match prediction and who will win the cricket match today is mentioned as under.

The 1st Match match of the Caribbean Premier League is going to be played at Warner Park, Basseterre, St Kitts. We had observed in the previous matches played here that the pitch here at this venue is good for batting. The track is slower than the others we have seen and helps the spinners quite a bit. We are hoping that the surface is bound to get slower and be a bit more difficult for batting in this match. A score of 185 is going to be tough to chase.

Dream11 fantasy team lineup prediction for Guyana Amazon Warriors vs Trinbago Knight Riders 1st Match match CPL 2021. After checking the latest players’ availability, which players will be part of both teams, he possible tactics that the two teams might use as we had leaned from previous seasons of Caribbean Premier League to make the best possible Dream11 team.