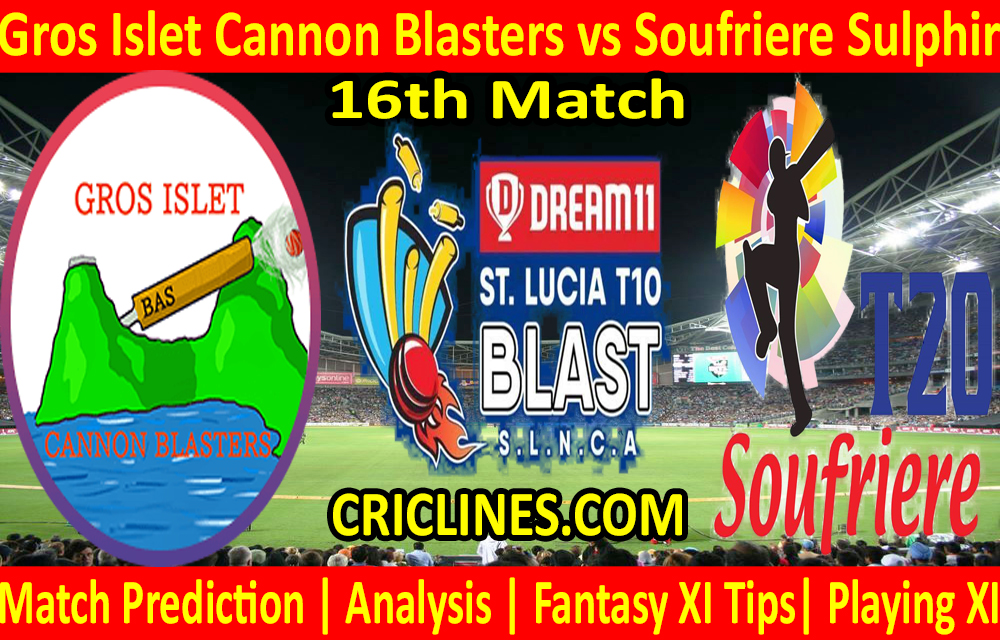 The cricket fans are ready to witness yet another big battle of T10 cricket. The 16th Match of St. Lucia T10 Blast 2021 is scheduled to play between Soufriere Sulphir and Gros Islet Cannon Blasters on Friday, 7th of May, 2021 at The Daren Sammy Cricket Ground, Gros Islet, St Lucia. We are posting safe, accurate, and secure today match prediction for all matches of SPL T10 free.

Soufriere Sulphir is the second-best performing team of this tournament right now. They had won two out of four matches played so far and are holding the second position on the points table. They were beaten by Babonneau Leatherbacks by the margin of 11 runs. The performance of the bowling department of this team was not good in that match. They leaked 101 runs in their inning of 10 overs. Kervell Prospere was the most successful bowler who picked one wicket in his two overs bowled out against just 11 runs. Jervan Charles also performed well in their previous match and picked one wicket in his two overs bowled out while he was charged for 17 runs.

Shani Mesmain, Bradley Tisson, and Xytus Emmanuel were the bowlers who failed to pick any wicket in the most recent match. Like the bowling, the batting order of Soufriere Sulphir also failed to give the best performance in the previous match. They failed to chase the target of 102 runs and scored 90 runs in their inning of 10 overs. Xystus Emmanuel was the most successful and highest run-scorer from their side who scored 26 runs with the help of five boundaries. Jervan Charles scored 14 runs while Ashley Hippoltye and Bradely Tisson scored 10 runs each.

The performance of Gros Islet Cannon Blasters had been average in this season of St. Lucia T10 Blast. They had won one out of two matches played so far. They are holding the 6th position on the points table. They are coming to this match on the back of a massive loss against Mon Repos Stars in their previous match by the margin of 6 runs. The performance of their bowling unit was good in that match. They leaked 97 runs in their inning of 20 overs. Kymani Sexius was the most successful and highest wicket-taker from their side who picked two wickets in his two overs bowled out while he leaked just 11 runs. Udell Preville and Dornan Edward picked one wicket each while Larry Edwards and Tyrel Chicot were the bowlers who failed to pick any wicket.

Gros Islet Cannon Blasters lost the previous match due to the worst performance by their batting order. They failed to chase the target of 98 runs and scored 91 runs in their inning of 10 overs. Lee Solomon was the highest run-scorer from their side who scored 29 runs and remained not out till the end of their inning. He faced 13 deliveries and smashed three boundaries and one six. Khan Elcock was the other batsman from their side who put some runs on the board. He scored 18 runs while Jard Goodman could manage to score 15 runs.

The 16th Match of St. Lucia T10 Blast season 2020 is scheduled to be held at The Daren Sammy Cricket Ground, Gros Islet, St Lucia. A blowing favored pitch is expected. A score near about 100 can be difficult for the chasing team.