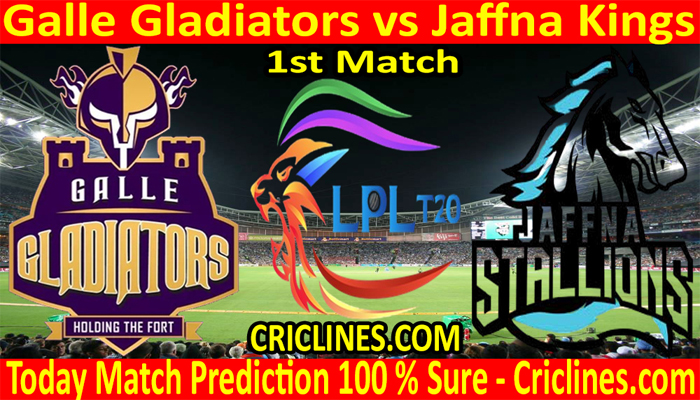 The world is ready to witness yet another big battle of the Lanka Premier League. The 1st match of LPL T20 is scheduled to play between Galle Gladiators and Jaffna Kings on Sunday, 5th December 2021 at R.Premadasa Stadium, Colombo. We are posting safe, accurate, and 100% secure today match prediction of LPL T20 free.

Galle Gladiators was the second-worst performing team of the previous edition of the Lanka Premier League. They could manage to win just two out of eight matches played at the league stage. They lost six matches and were situated at the second last position from the bottom of the table. They beat the best performing team, Colombo Kings in the semi-final match and reached the final where they were beaten by Jaffna Stallions.

Jaffna Kings had changed their name from Jaffna Stallions. They were the winner of the previous edition of LPL T20 and they will be defending their title this season. They could manage to win just four out of eight matches played at the league stage and they were situated at the 3rd spot on the table. They beat Dambulla Viiking in the semi-final two matches and reached the final where they beat Galle Gladiators and won the title of Lanka Premier League 2020.

Sarfaraz Ahmed is the wicketkeeper batsman of this team. The bowling unit of Galle Gladiators is also strong and experienced at least on paper. Tabraiz Shamsi, Mohammad Amir, Anwar Ali, Nuwan Thushara, Pulina Tharanga, Dilshan Madushanka, Asian Daniel, and Kevin Koththigoda are going to take care of the bowling department of the Gladiators.

The 1st match of Lanka Premier League is going to be held at the R.Premadasa Stadium, Colombo. We had observed in the previous matches played here that the pitch here at this venue is good for batting. The track is slower than the others we have seen and helps the spinners quite a bit. We are hoping that the surface is bound to get slower and be a bit more difficult for batting in this match. A score of 185 is going to be tough to chase.

Dream11 fantasy team lineup prediction for Galle Gladiators vs Jaffna Kings 1st Match LPL 2021. After checking the latest player’s availability, which players will be part of both teams, he possible tactics that the two teams might use as we had learned from previous seasons of Lanka Premier League to make the best possible Dream11 team.