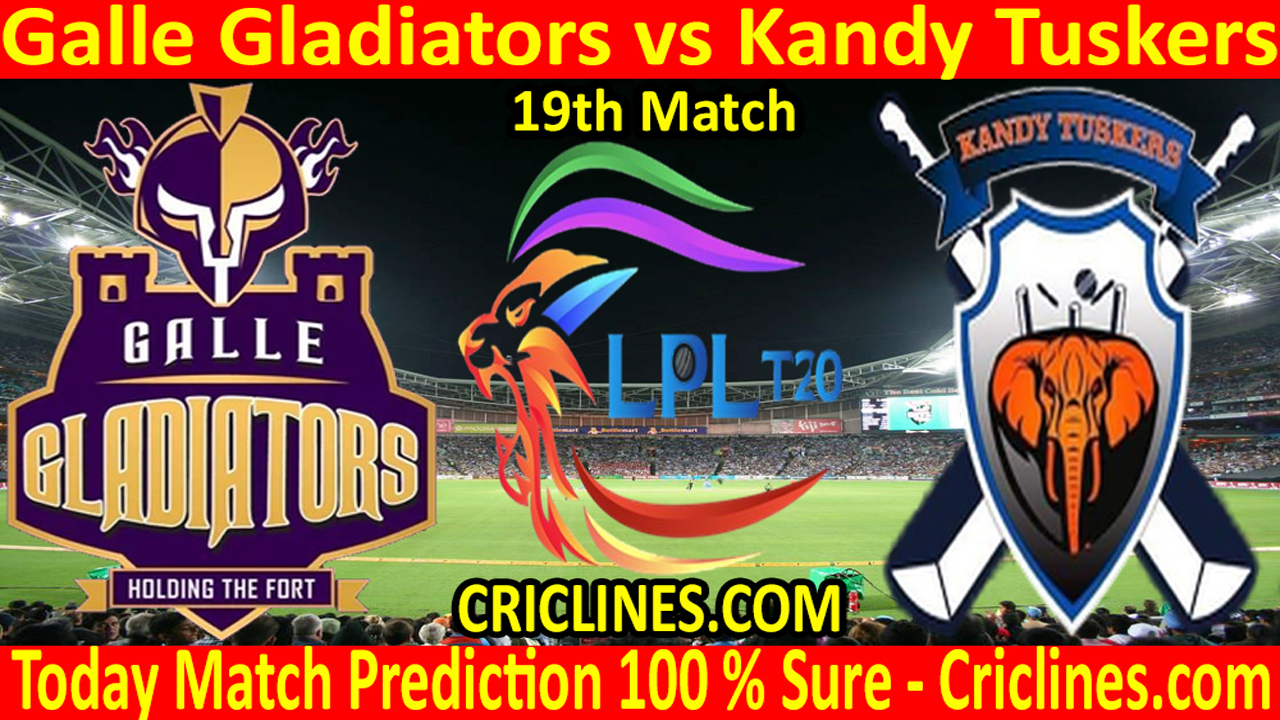 The cricket fans are ready to witness yet another big battle of the Lanka Premier League. The 19th Match of LPL T20 is scheduled to play between Galle Gladiators and Galle Gladiators on Thursday, 10th December 2020 at Mahinda Rajapaksa International Stadium, Hambantota. We are posting safe, accurate, and 100% secure today match prediction for all matches of LPL T20 free.

Galle Gladiators had bounced back after losing five matches in a row. Now they had played six matches with one win and five losses. They are situated at the 4th position on the points table and have to win this match to cement their place in the playoff. They are coming to this match on the back of a massive win over Colombo Kings in their most recent match with a handsome margin of eight wickets. They lost the toss and were asked to field first. Their bowling unit once again failed to perform well in that match. They were charged for 171 runs in their inning of 20 overs. Mohammad Amir was the most successful bowler from their side who picked five wickets in his four overs bowled out against 26 runs.

Lakshan Sandakan was the other bowler who performed well in the previous match and picked three wickets in his four overs bowled out while he was charged for 33 runs. Dhananjaya Lakshan picked one wicket while N Thushara, S Jayasuriya, and the skipper, B Rajapaksa were the bowlers who failed to pick any wicket. Galle Gladiators won the previous match due to the best performance by their batting order. They chased the target of 172 runs in 17.3 overs. Almost all batsmen from their side put some runs on the board. Ahsan Ali was the most successful and highest run-scorer form their side who scored 56(38) runs and smashed nine boundaries and one six. Danushka Gunathilaka scored 38 runs while the skipper, Bhanuka Rajapaksa remained not out after scoring 37 runs.

Kandy Tuskers had almost failed to perform well in this edition of the Lanka Premier League. They had played a total of seven matches with just two wins to their name. They had lost five matches and are laying at the second position from the bottom of the points table. They are coming to this match on the back of a massive win over Jaffna Stallions in their most recent match with a handsome margin of six wickets. They lost the toss and were asked to field first. The way how their bowling unit performed in that match was just outstanding. They leaked 150 runs in their inning of 20 overs. N Pradeep was the highest wicket-taker from their side who picked three wickets in his four overs bowled out while he leaked 36 runs.

Vishwa Fernando, Gunaratne, and Dale Steyn picked two wickets each while Dilruwan Perera and Prasanna were the bowlers who failed to pick any wicket in the previous match. The performance of the batting order of Kandy Tuskers was good. They chased the target of 151 runs in 19.1 overs. Asela Gunaratne was the most successful and highest run-scorer from their side who remained not out after scoring 52(37) runs with the help of five boundaries and one six. The skipper, Kusal Perera also performed well in the previous match. He scored 42(36) runs and four boundaries during his inning. Irfan Pathan remained not out after scoring 25 runs.

Kandy Tuskers is full of experienced and young players of the t20 format. The batting order of this team is also strong and some well-known hitter of the t20 format is part of the squad of this team, so the winning chances of today match for Kandy Tuskers have been increased. The equation of who will win today cricket match prediction and who will win the cricket match today is mentioned as under.

The 19th Match of Lanka Premier League is going to be held at the Mahinda Rajapaksa International Stadium, Hambantota. We had observed in the previous matches played here that the pitch here at this venue is good for batting. The track is slower than the others we have seen and helps the spinners quite a bit. We are hoping that the surface is bound to get slower and be a bit more difficult for batting in this match. A score of 185 is going to be tough to chase.

Dream11 fantasy team lineup prediction for Galle Gladiators vs Kandy Tuskers 19th Match LPL 2020. After checking the latest player’s availability, which players will be part of both teams, the possible tactics that the two teams might use as we had learned from previous seasons of Lanka Premier League to make the best possible Dream11 team.