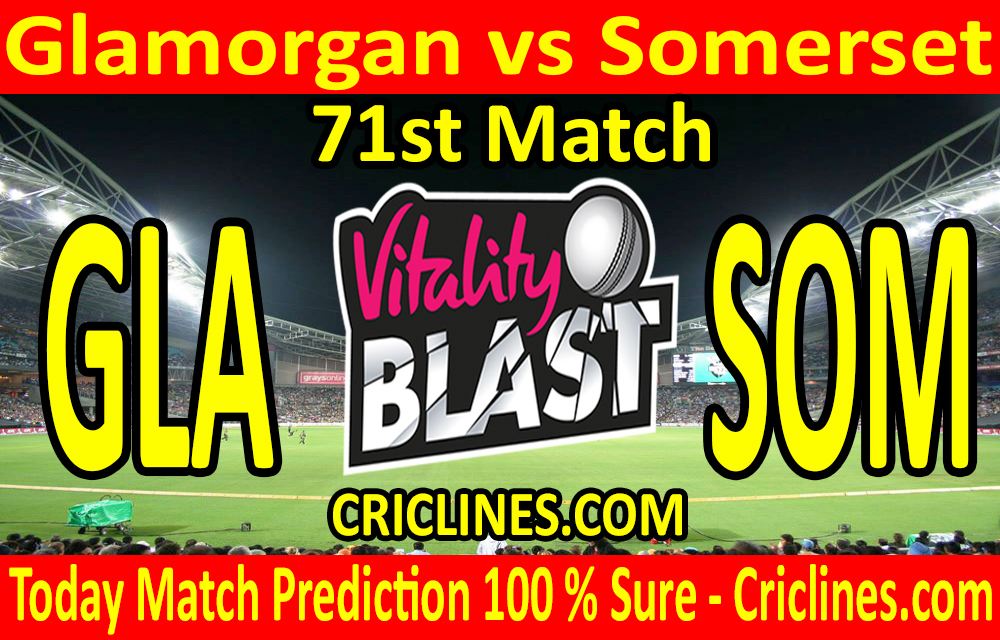 The cricket fans are ready to witness yet another big battle of Vitality T20 Blast. The 71st Match of Vitality T20 Blast 2020 is scheduled to play between Glamorgan and Somerset on Wednesday, 16th September 2020 at Sophia Gardens, Cardiff. We are posting safe, accurate, and secure today match prediction for all matches of T20 Blast free.

The performance of Glamorgan had not been impressive in this season of the Vitality T20 Blast. They had played a total of seven matches so far with just two wins to their name. They had lost four matches while their one match was ended with no result. They are holding the second last position on the points table of the central group. They won their most recent match against Northamptonshire with a handsome margin of seven wickets. They lost the toss and were asked to field first. The way how their bowling unit performed in that match was just outstanding. They sent the all team of Northamptonshire back to the pavilion on a total of just 98 runs in 17.2 overs. Almost all bowlers from their side performed well in the previous match. van der Gugten was the most successful and economical bowler from their side who picked three wickets in his three overs bowled out against 17 runs. Prem Sisodiya also picked three wickets while he was charged for 26 runs. R Smith picked two wickets while A Salter and de Lange picked one wicket each in the previous match.

Like the bowling, the batting order of Glamorgan also performed well in the previous match. They chased the target of 99 runs in 16 overs. Almost all bowlers from their side performed well in the previous match. David Lloyd was the highest run-scorer from their side who scored 40 runs on just 29 deliveries with the help of four boundaries and one six. Nicholas Selman also had a good performance with the bat. He scored 28 runs while he faced 27 balls and smashed two boundaries and one six. Callum Taylor remained not out after scoring 17 runs.

Somerset also had failed to give their best performance in this tournament. They had played a total of seven matches so far with two wins to their name. They also had lost four matches while their one match was ended with no result. They are situated in the 4th position on the points table of the central group. They were beaten by Gloucestershire in their previous match by the margin of 11 runs. They won the toss and decided to field first. The performance of their bowling unit was not impressive. They leaked 205 runs in their inning of 20 overs. They used seven bowlers in that match but no bowler from their side could perform well. Max Waller was the highest wicket-taker from their side who picked three wickets in his four overs bowled out against just 18 runs. van der Merwe, Davey, and the skipper, L Gregory picked one wicket each while Tom Lammonby, Ollie Sale, and Abell were the bowlers who failed to pick any wicket.

The batting order of Somerset performed well in the previous match but failed to chase the target of 206 runs. They could manage to score 192 runs in their inning of 20 overs. Will Smeed was the highest run-scorer from their side who scored 82 runs on just 49 deliveries with the help of six boundaries and five sixes. The skipper, Lewis Gregory also had an outstanding performance in the previous match with the bat. He scored 38 runs while he faced just 21 deliveries and smashed two boundaries and three sixes. Tom Lammonby scored 17 runs while Babar Azam had 10 runs to his name.

The 71st Match of Vitality T20 Blast is going to be played at Sophia Gardens, Cardiff. The pitch here at this stadium is expected to be flat and much favored for batting. It has a decent amount of pace and bounces in it. We may have some high scoring matches here. The pitch may also have some help in it for the seamers.

Check out the Dream11 fantasy prediction for the 71st Match of the finals day in Vitality T20 Blast, between Glamorgan and Somerset.