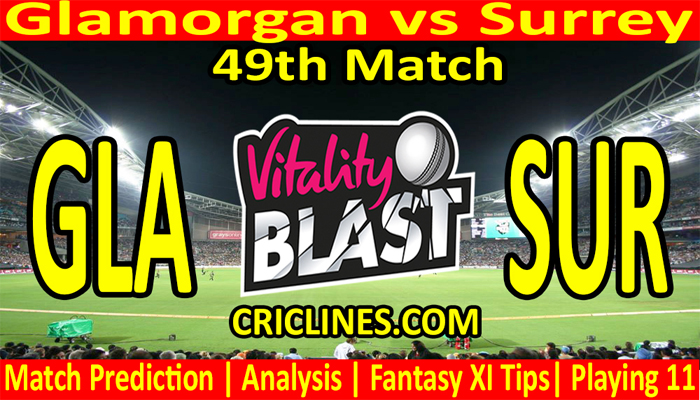 The world is ready to witness yet another big battle of Vitality T20 Blast. The 49th match of Vitality T20 Blast 2022 is scheduled to play between Glamorgan and Surrey on Sunday, 5th June 2022 at Sophia Gardens, Cardiff. We are posting safe, accurate, and 100 % secure today match prediction of T20 Blast free.

The performance of Glamorgan had not been impressive in Vitality T20 Blast 2022. They had played a total of five matches with just two wins to their name. They had lost three matches and are situated at the seventh position on the points table of the South Group. They had beaten Somerset in their most recent match. On the other side, the way how Surrey performed in T20 Blast is just outstanding. They are the best-performing team in this tournament right now. They had won all four played matches and are leading the points table. Their next encounter is against a weak team and we are sure that this match is going to be very interesting.

The batting order of Glamorgan is strong and experienced and is led by the skipper, D Lloyd, and Sam Northeast. They had provided a good opening start in almost each and every match. Labuschagne, Kiran Carlson, and Edward Byrom are handling the middle batting order while C Cooke, Daniel Douthwaite, and James Weighell are handling the lower batting order. Edward Byrom was the most successful batter in the previous match with 37 runs to his name. He faced 26 balls and smashed four boundaries and two huge sixes during his inning. D Lloyd also performed well and scored 31 runs on just 20 balls with the help of three boundaries and one huge six. Kiran Carlson scored 28 runs while Daniel Douthwaite remained not out after scoring 23 runs on just 11 balls. He smashed three huge sixes during his inning.

Glamorgan had lost most of its matches due to the worst performance by their bowling department. The most recent match against Somerset is a big example of it where they leaked the target of 174 runs in just 14.1 overs. Michael Hogan and Michael Neser are leading the bowling department with James Weighell, Daniel Douthwaite, Prem Sisodiya, and Marnus Labuschagne leading the bowling department. Prem Sisodiya was the only bowler from the side of Glamorgan who had a wicket to his name. He picked one wicket in three overs and bowled out while he was charged for 30 runs. Marnus Labuschagne, Daniel Douthwaite, James Weighell, Michael Neser, and Michael Hogan were the bowlers who could not manage to pick any wicket.

The most recent match win of Surrey came against Kent with a margin of 32 runs even having a low total on the board. We are not saying the batting order of Surrey is weak but they could manage to score just 159 runs in 20 overs. Jason Roy and Will Jacks are opening the batting inning with Sam Curran, Laurie Evans, and Sunil Narine in the middle order, and Jordan Clark and J Overton are taking care of the lower batting order. Sam Curran was the highest run-scorer who scored 43 runs in 34 balls with the help of five boundaries. J Overton was the other batter who performed well with the bat and scored 27 runs while Sunil Narine scored 25 runs.

The bowling department of Surrey had played the main role in each and every match. Reece Topley, Jordan Clark, Daniel Worrall, Jamie Overton, Sunil Narine, and Chris Jordan are leading the bowling department of Surrey. They defended the target of 160 runs and leaked just 127 runs in 20 overs. Reece Topley was the most successful bowler with three wickets to his name in four overs against 24 runs. Chris Jordan also performed well with the ball and had two wickets to his name in four overs while he was charged for 27 runs. Sunil Narine, Jamie Overton, Daniel Worrall, and Jordan Clark picked one wicket each.

Here is the possible playing eleven of both teams for this match.

The toss will play a key role in the decision of all matches of Vitality T20 Blast. Defending is much easier in the conditions in England than chasing so according to toss prediction, the team who will win the toss will elect to bat first.

The 49th match of Vitality T20 Blast is going to be played at Sophia Gardens, Cardiff. The pitch here at this stadium is expected to be flat and much favored for batting. It has a decent amount of pace and bounces in it. We may have some high-scoring matches here. The pitch may also have some help in it for the seamers.

The weather forecast for Cardiff is good for a cricket match. There are some chances of rain during this match but we are hoping for a full match to see without any disturbance.

Check out the Dream11 fantasy prediction for the 49th Match of the finals day in Vitality T20 Blast, between Glamorgan and Surrey.