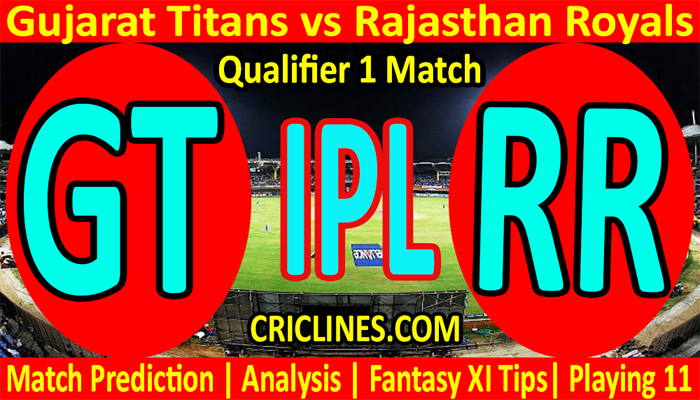 The world is ready to witness yet another big battle of the IPL 2022. The Qualifier 1 match of the Indian Premier League 2022 is scheduled to play between Gujarat Titans and Rajasthan Royals on Tuesday, 24th May 2022 at Eden Gardens, Kolkata. We are posting safe, accurate, and 100% secure today match prediction of IPL T20 2022 with live IPL score and ball by ball updates with prediction.

The table-toppers of IPL 2022 are going to face each other in this qualifier match. The winner of this match will confirm the ticket to the final of this big event of cricket while the loser will have another chance. GT is part of IPL for the first time in the history of IPL and what a season they are having. They had been the most successful team in league matches with ten wins to their names in 14 matches. They lost just four matches and are leading the points table after league matches. Gujarat is the only team in IPL 2022 that had won ten matches as no other team had won more than nine matches. On the other hand, RR also had been in IPL 2022 and they are the second-best performing team in league matches. They won nine out of 14 matches and lost five matches. They are holding the second spot on the table. They are equal in the points with LSG but they are good in the net run rate and also have two chances to qualify for the final of IPL 2022.

GT had been just superb in IPL 2022 but they were not good in the previous match against RCB. The batting order of Gujarat is very strong and experienced and had played the main role in each and every win. W Saha and Shubman Gill are opening the batting inning for GT. The middle and lower batting order of Gujarat is also strong and experienced. Mathew Wade, Hardik Pandya, and David Miller are handling the middle batting order while Rahul Tewatia and Rashid Khan are also available to take care of the lower batting order. They could manage to score 168 runs in 20 overs in the previous match against Bangalore. GT has good news as Hardik Pandya is back to good form and he was the highest run-scorer in the previous match with 62 runs on 47 balls with the help of four boundaries and three huge sixes. He remained not out till the 20th over. David Miller also performed well with the bat and scored 34 runs on 25 balls. He smashed three huge sixes during his inning. W Saha was the other batter who was good with the bat. He scored 31 runs on 22 balls and smashed four boundaries and one huge six.

Rashid Khan was also good with the bat and smashed 19 runs on just six balls with the help of one boundary and two huge sixes. The bowling department of GT also had been good throughout IPL 2022 but they had been under the belt in some previous matches. Mohammed Shami, Hardik Pandya, Rashid Khan, Yash Dayal, Ravisrinivasan Sai Kishore, and Lockie Ferguson had been the leading bowlers of Gujarat. Rashid Khan had been the star bowler of GT and also the highest wicket-taker from the side of Gujarat. He was also the highest wicket-taker in the previous match with two wickets into his name in four overs against 32 runs. No other bowler from their side could manage to pick any wicket in the most recent match. Lockie Ferguson, Ravisrinivasan Sai Kishore, Yash Dayal, Hardik Pandya, and Mohammed Shami were the bowlers who could not pick any wicket. Hardik Pandya proved the most expensive bowler who leaked 35 runs in three overs while Mohammed Shami was charged for 23 runs in just two overs. GT has a good combination of the bowling department and we don’t think that they are going to make any changes in the bowling department.

RR is coming to this match on the back of a massive win over CSK in the most recent match with a handsome margin. The bowling department of Rajasthan had been good in IPL 2022. Trent Boult and Prasidh Krishna are leading the bowling department with Ravi Ashwin, Chahal, and Obed McCoy. They were outstanding in the previous match where they leaked just 150 runs in 20 overs. Obed McCoy was the most successful bowler with two wickets to his name in four overs against just 20 runs. Yuzvendra Chahal also picked two wickets while he was charged for 26 runs in four overs. Ravi Ashwin was another bowler who was good with the ball. He picked one wicket in four overs against 28 runs. Trent Boult also picked one wicket but he leaked a lot of runs. He was charged for 44 runs in four overs. Prasidh Krishna was the only bowler who could not manage to pick any wicket. The bowling department of Rajasthan is performing well and we are sure that they will play a major role in this match.

The batting order of RR is also strong and experienced. Yashasvi Jaiswal and Jos Buttler are opening the batting inning for Rajasthan with Sanju Samson, Devdutt Padikkal, Ravichandran Ashwin, and Shimron Hetmyer, and Riyan Parag. These all batters had been just good in IPL 2022. Yashasvi Jaiswal was the most successful batter in the previous match with 59 runs to his name on 44 balls with the help of eight boundaries and one huge six. Ravichandran Ashwin was the other batter who was good with the bat. He scored 40 runs on just 23 balls and smashed two boundaries and three huge sixes during his inning. He remained not out till the chase of the target. Sanju Samson scored 15 runs while Riyan Parag had 10 runs to his name. Shimron Hetmyer is back in the playing eleven but he was not good with the bat in the previous match. He is the kind of batter who can win any match single-handedly. He is a hard hitter and smashes sixes quite easily. Jos Buttler is the second-highest run-scorer in IPL and he will also play a key role in the result of this match.

Gujarat vs Rajasthan to Head Matches

Gujarat Titans had won two out of the most recent five matches they had played while Rajasthan Royals had won three matches out of five recently played matches.

Rajasthan Royals is overall a strong team when we compare with Gujarat Titans. They have the best players in the t20 format of cricket. The batting order of this team is also strong and some well-known hitters of the t20 format are part of the squad of this team, so the winning chances of today’s match for Rajasthan Royals have been increased. The equation of who will win today’s cricket match prediction and who will win the cricket match today is mentioned as under.

The Qualifier 1 match of IPL T20, 2022 is going to be held at the Eden Gardens, Kolkata. We had observed in the previous matches played here that the pitch here at this venue is good for batting in early overs. The track has a good amount of pace and bounce which allows the batsmen to the good cricketing shorts but this ground also have big boundaries which can be a plus point for the bowlers. A score of 190 plus seems to be a par score.

The weather forecast for Kolkata is good for this cricket match. There are almost no chances of rain in the region and we are hopeful that we will have a full match to enjoy.

Yashasvi Jaiswal, Obed McCoy, and Hardik Pandya are key players to watch in this match.

Dream11 fantasy team lineup prediction for Gujarat Titans vs Rajasthan Royals Qualifier 1 Match IPL 2022. After checking the latest player’s availability, which players will be part of both teams, the possible tactics that the two teams might use as we had learned from previous seasons of Indian Premier League to make the best possible Dream11 team.

We had provided you with the above-mentioned IPL prediction on the basis of our research, understanding, and analysis. These prediction tips have also been based on the reports that we have from our different sources. You can consider the point we had provided you and the final decision will be yours.