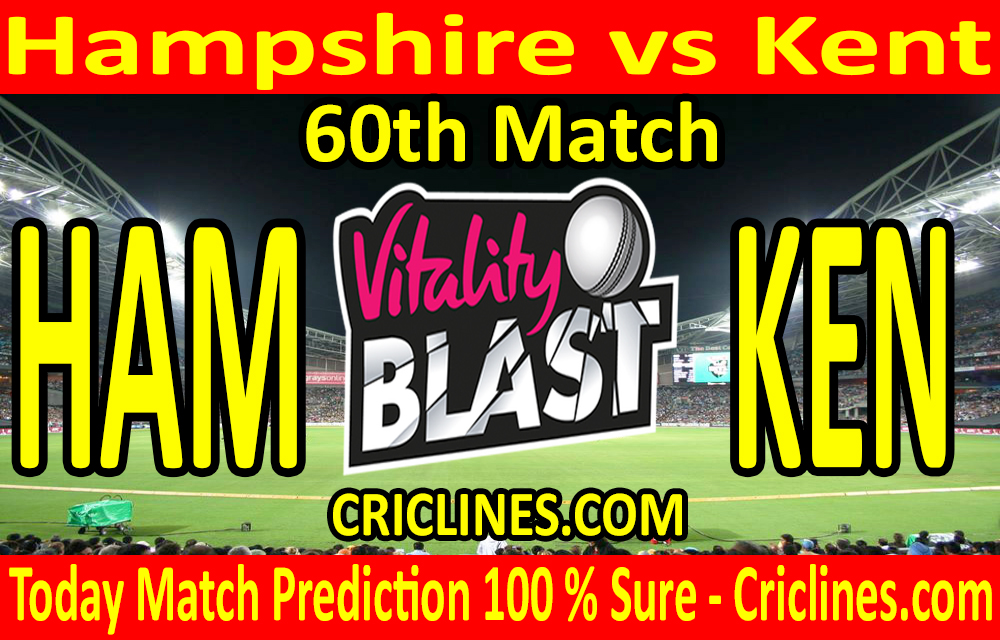 The cricket fans are ready to witness yet another big battle of Vitality T20 Blast. The 60th Match of Vitality T20 Blast 2020 is scheduled to play between Hampshire and Kent on Monday, 14th September 2020 at The Rose Bowl, Southampton. We are posting safe, accurate, and secure today match prediction for all matches of T20 Blast free.

Hampshire had failed to perform well in this tournament. They had played a total of six matches with just one win to their name. They had lost one match while their one match was ended with no result. They are holding the 5th position on the points table. They were beaten by Middlesex in their previous match by the margin of 19 runs. They lost the toss and were asked to field first. The performance of their bowling unit was impressive. They leaked 142 runs in their inning of 20 overs. Almost all bowlers from their side performed well in that match. Mason Crane was the most successful bowler from their side who picked two wickets in his four overs bowled out while he was charged for just 20 runs. Ryan Stevenson, Shaheen Afridi, and Ian Holland picked one wicket each while C Wood was the only bowler from their side who failed to pick any wicket in the previous match.

Hampshire lost the previous match due to the worst-performing by their batting order. They failed to chase the target of 143 runs and scored 123 runs while their all team was out in 18.1 overs. Tom Alsop was the highest run-scorer from their side who scored 43 runs on 41 deliveries with the help of three boundaries and one six. James Fuller also had a good performance with the bat. He scored 34 runs on 31 balls and smashed two boundaries. Sam Northeast, Joe Weatherley, and Shaheen Afridi failed to open their account on the scoreboard. The bowling unit of Hampshire is performing well and their batting order should give their best performance in up-coming matches.

The performance of Kent had been average in this season of T20 Blast. They had played a total of six matches so far with three wins to their name. They had lost one match while their one match was tied and the other match was ended with no result. They are holding the 3rd position on the points table of the South Group. They lost their most recent match against Sussex by a heavy margin of eight wickets. They lost the toss and were asked to bat first. The performance of their batting order was not impressive. They could manage to score 141 runs in their inning of 20 overs. Joe Denly was the highest run-scorer from their side who scored 32 runs on just 17 deliveries with the help of four boundaries and one six. The skipper, D Bell-Drummond scored 29 runs while Heino Kuhn had 22 runs to his name.

The performance of Kent had been good in their previously played matches so far, so the winning chances of today match for Kent have been increased. The equation of winning chances of both teams for today’s match is mentioned as under.

The 60th Match of Vitality T20 Blast is going to be played at The Rose Bowl, Southampton. The pitch here at this stadium is expected to be flat and much favored for batting. It has a decent amount of pace and bounces in it. We may have some high scoring matches here. The pitch may also have some help in it for the seamers.

Check out the Dream11 fantasy prediction for the 60th Match of the finals day in Vitality T20 Blast, between Hampshire and Kent.