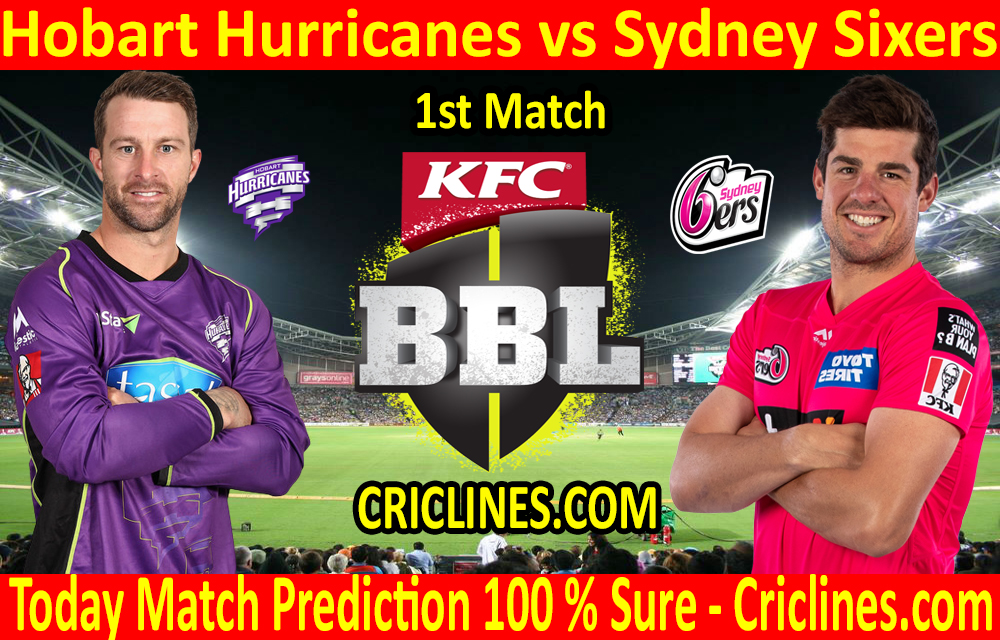 The cricket fans are ready to witness yet another big battle of BBL T20. The 1st Match of Big Bash League 2020-21 is scheduled to play between Hobart Hurricanes and Sydney Sixers on Thursday, 10th December 2020 at Bellerive Oval, Hobart. We are posting safe, accurate, and secure today match prediction for all matches of BBL free.

Hobart Hurricanes performed well in the previous season of the Big Bash League and ended the league stage matches at the 4th position on the points table but they were beaten in the eliminator match by Sydney Thunder. Some key changes had been in the squad of the Hobart Hurricanes for this edition of the BBL T20. Matthew Wade is going to lead this team during this tournament who had performed well in the recent series of India tour of Australia. He is in superb form these days and this is a good sign for the Hurricanes. D Arcy Short, David Malan, Colin Ingram, and Tim David are the strength of the batting order of this team.

Keemo Paul, James Faulkner, and Will Jacks are the all-rounder in the squad of Hobart Hurricanes while Jake Doran, Peter Handscomb, and Tim Paine are also part of the squad of this team. The bowling unit of this team is not much stronger as compared to the other teams of this tournament. Scott Boland, Nathan Ellis, David Moody, Wil Parker, Nick Winter, Jarrod Freeman, and Sandeep Lamichhane are the bowlers for the Hurricanes.

Sydney Sixers won the title of the previous edition of the BBL T20 and they will be defending their title. The performance of the sixers was outstanding in the previous edition of this tournament. They won nine out of 14 matches played at the league stage. They were holding the 2nd position on the points table after the end of league stage matches. They won the qualifier match against Melbourne Stars and made their way to the final where they beat Melbourne Stars with a margin of 19 runs. Moises Henriques is going to lead the Sixers during this season of the BBL T20.

The batting order of the Sydney Sixers is strong at least on papers. James Vince, Jack Edwards, Daniel Hughes, Jordan Silk, Justin Avendano, and Hayden Kerr will be leading the batting order of this team. Josh Philippe is the wicket-keeper batsman for the Sixers. Sydney Sixers are very rich when it comes to the bowling department. Sean Abbott, Jackson Bird, Mickey Edwards, Nathan Lyon, Ben Manenti, Mitchell Starc, Jason Holder, and Carlos Brathwaite will be leading the bowling department of the Sydney Sixers.

Sydney Sixers is full of experienced and young players of the t20 format. The batting order of this team is also strong and some well-known hitter of the t20 format is part of the squad of this team, so the winning chances of today’s match for Sydney Sixers have been increased. The equation of who will win today cricket match prediction and who will win the cricket match today is mentioned as under.

The 1st Match of Big Bash League 2020-21 is going to be held at the Bellerive Oval, Hobart. We had observed in the previous matches played here that the pitch here at this venue is good for batting. The track is slower than the others we have seen and helps the spinners quite a bit. We are hoping that the surface is bound to get slower and be a bit more difficult for batting in this match. A score of 185 is going to be tough to chase.