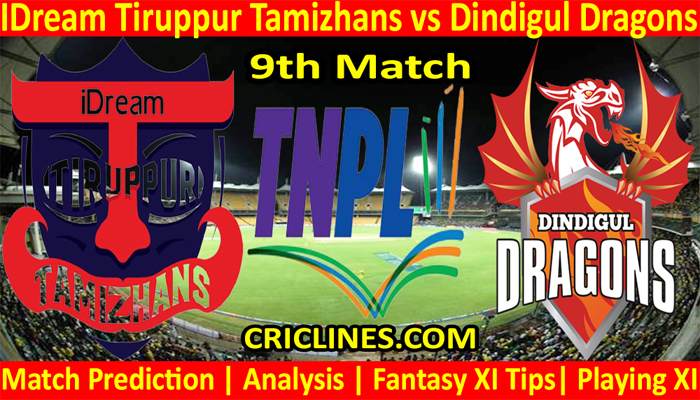 The cricket fans are ready to witness yet another big battle of the TNPL T20 League. The 9th match of Tamil Nadu Premier League 2022 is scheduled to play between IDream Tiruppur Tamizhans and Dindigul Dragons on Monday 4th July 2022 at NPR College Ground, Dindigul. We are posting safe, accurate, and secure today match prediction of TNPL.

Tamil Nadu Premier League is going to resume once again after the gap of three days and IDream Tiruppur Tamizhans are going to face Dindigul Dragons in this match. IDream Tiruppur Tamizhans had played just one match till now and they won that match against Ruby Trichy Warriors with a handsome margin of four wickets. They had a winning start and we are sure that they are going to give a tough time to all teams of TNPL 2022. On the other side, Dindigul Dragons had played three matches till now and had not performed as many of us were expecting. They had lost just one out of three matches played till now. They had lost two matches and are situated at the fifth position on the points table. This performance of this team shows that they are going to face many issues in the remaining matches.

The opening match of IDream Tiruppur Tamizhans was very interesting against Ruby Trichy Warriors which they won with a margin of four wickets. They have a strong bowling department in the side which was good in the first match. They leaked 157 runs in 20 overs. Mohan Prasath, A Crist, M Mohammad, Maan Bafna, L Sathiyannaarayan, and R Rajkumar are the leading bowlers of IDT. A Crist was the highest wicket-taker from their side but he leaked plenty of runs. He picked two wickets while he was charged for 41 runs in four matches. Mohan Prasath, M Mohammed, and L Sathiyannaarayan picked one wicket each while R Rajkumar and Maan Bafna were the bowlers who could not manage to pick any wicket.

The batting department of IDream Tiruppur Tamizhans was also good in their very first match. They chased the target of 158 runs in 18.5 overs. S Siddharth and Srikkanth Anirudha are opening the batting inning with Subramanian Anand and Maan Bafna available to handle the top batting order. Suresh Kumar, Tushar Raheja, R Rajkumar, and M Mohammad are handling the middle and lower batting order. Almost all batters from their side put some runs on the board except for the opening pair. Tushar Raheja was the highest run-scorer from the side of IDT who remained not out till the chase of the target after scoring 42 runs on just 26 balls with the help of four boundaries and two huge sixes. Subramanian Anand also performed well with the bat and scored 35 runs. M Mohammed was the other batter who put some runs on the board. He remained not out after scoring 29 runs. He faced just 15 balls and smashed two boundaries and the same huge sixes during his inning.

Dindigul Dragons were the favorite in the previous match against Nellai Royal Kings but they lost the match due to the poor bowling performance. You know that this was a rain-affected match which was reduced to 12 overs per side. They were asked to bat first after losing the toss. The performance of their batting order was good where they scored 130 runs in 12 overs. Almost all batters from their side performed well and put some runs on the board. Vishal Vaidhya was the highest run-scorer from their side who scored 45 runs on just 21 balls with the help of six boundaries and two huge sixes. The skipper, Hari Nishanth was also good with the bat and scored 37 runs. He faced 27 balls and smashed three boundaries and two huge sixes during his inning. AG Pradeep remained not out after scoring 14 runs at the strike rate of 200.

Dindigul Dragons lost the previous match due to the worst performance by their bowling department. The total of 130 runs was a huge target and was easy to defend in 12 overs but they leaked this target in just 11 overs. They have an experienced bowling department on the side and bowlers like Rangaraj Suthesh, Lakshminarayanan Vignesh, M Silambarasan, Karaparambil Monish, R Vivek, and A Arun are leading the bowling department of Dindigul Dragons. Lakshminarayanan Vignesh was the only bowler from the side of DGD who picked one wicket in two overs and bowled out against just 11 runs. Karaparambil Monish was the other bowler who had a wicket to his name but he leaked a lot of runs. He picked one wicket while he was charged for 32 runs in just two overs. No other bowler from the side of Dindigul Dragons could manage to pick any wicket.

The toss is going to play an important role in the decision of all previously played matches of Tamil Nadu Premier League. We had seen in the previous editions of this tournament that chase is the best option for both teams at the venue of Chennai. Almost 60% of matches had been won by the bowling first. According to our toss prediction, the team who will win the toss may choose to field first.

The 9th Match match of Tamil Nadu Premier League season 2022 is scheduled to be held at NPR College Ground, Dindigul. The pitch here at this venue is flat and good for batting as there is no bounce and pace. Out-field on this venue is very fast and the ball will travel to the boundary very quickly. It also has a lot of help for the spin bowlers but almost all teams in this tournament have a strong batting order so this does not matter. According to the live cricket score, a total of 195 runs should be a par score.

While we had a deep look at the squad, we think that Dindigul Dragons is going to perform well in this match the TNPL T20 season 7 as they have a couple of players who can change the game. In this match, the batting department of the Dindigul Dragons is much stronger as compared to the IDream Tiruppur Tamizhans. We also have reports from different sources for the win of the DDS.