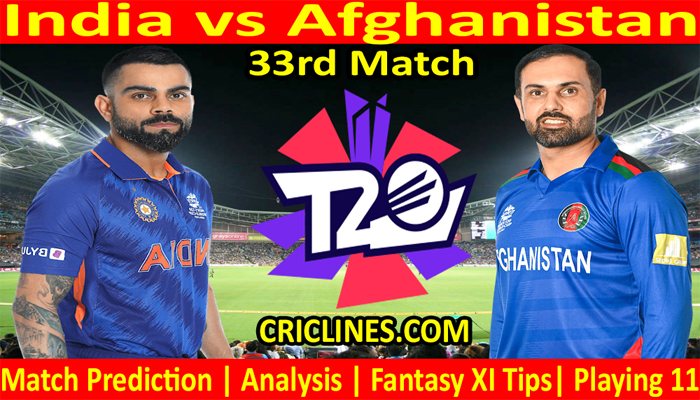 The cricket fans are ready to witness yet another big battle of World Cup T20. The 33rd Match of World Cup T20 2021 is scheduled to play between India and Afghanistan on Wednesday, 3rd November 2021 at Sheikh Zayed Stadium, Abu Dhabi. We are posting safe, accurate, and secure today match prediction of ICC T20 World Cup free.

India had lost both matches played against Pakistan and New Zealand and their chances to qualify for the semi-finals are very short. They have to beat Afghanistan with a handsome margin to maintain the net run rate and also this condition applies to their next matches against Scotland and Namibia. Afghanistan had played three matches with two wins to their name. They also have some chances to qualify but for that, they have to beat India and New Zealand.

Team India had disappointed its fans around the world including me. India had never lost two early matches in a row in ICC events since 2007. You may know that India was a favorite for the ICC T20 World Cup 2021 title before the start of this tournament. There are a lot of questions that why India is losing? In our opinion, there are three key reasons behind this. Almost all players of team India had been under bio-bubbles for the last three months. This team also had been unlucky as they had lost the toss in both matches. Jasprit Bumrah addressed in a post-match conference that they had been under pressure in the previous matches.

The batting order of India had failed to put some big runs on the board while batting first. They scored 150 plus runs against Pakistan but could manage to score just 110 runs against New Zealand. In our opinion, Change in the batting order is a key reason behind this. The bowling department of India also had totally failed. They had picked just two wickets in two T20 matches and both wickets were picked by Jasprit Bumrah. We think that we may see a couple of changes in the squad of India for this match. Rahul Chahar may have a debut in this match in the place of Varun Chakravarthy and Ravi Ashwin may replace Hardik Pandya.

We mentioned in the previous match prediction of Afghanistan vs Pakistan that Afghanistan is a dangerous side. They had crushed Scotland and Namibia and given tough times to Pakistan. They will also give a tough time to India in this match. The batting order of this team is to play fearless cricket and have an attacking strategy right from the start of their batting inning. We same the same against their most recent match against Pakistan. The top batting order of this team is very dangerous. Mohammad Shahzad, Rahmanullah Gurbaz, and Hazratullah Zazai can create problems for the bowling unit of India.

Like the batting, the bowling department of Afghanistan is also dangerous. They have mistery bowlers like Rashid Khan, Mohammad Nabi, and Gulbadin Naib. Naveen-ul-Haq picked three wickets in the previous match against Namibia. Hamid Hassan was also just outstanding with the ball. He also picked three wickets in his four overs bowled out against just nine runs. Rashid Khan and Mohammad Nabi had played in the recent conditions in IPL and it will not easy for the batting order of India to score some big runs against these bowlers.

India had played two T20 matches against Afghanistan where they won both matches while Afghanistan is still searching for a win against India in T20 Internationals.

Virat Kohli, Rashid Khan, and Mohammad Nabi are key players to watch in this match.

The 33rd Match of World Cup T20 2021 is going to be held at Sheikh Zayed Stadium, Abu Dhabi. We had observed in the previous matches played here that the pitch here at this venue is good for batting. The track is slower than the others we have seen and helps the spinners quite a bit. We are hoping that the surface is bound to get slower and be a bit more difficult for batting in this match. A score of 170 is going to be tough to chase.

Who Will Win India vs Afghanistan, 33rd Match WTC 21