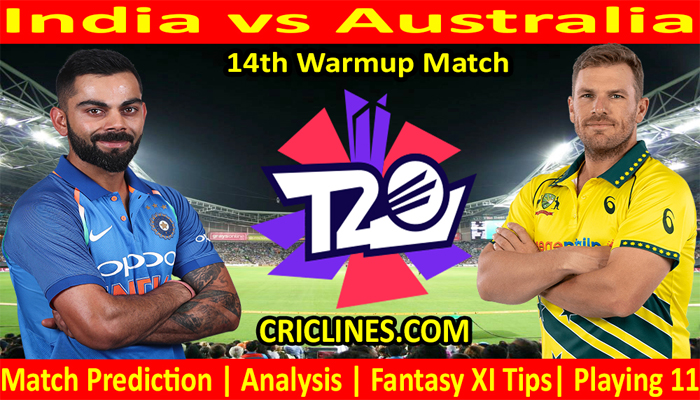 The world is ready to witness yet another big battle of World Cup T20. The Warm-up Match 14 of World Cup T20 2021 is scheduled to play between India and Australia on Wednesday, 20th October 2021 at ICC Academy Ground, Dubai. We are posting safe, accurate, and secure today match prediction of World Cup free.

India had won its first warm-up match against England quite easily. They tested Ishan Kishan who had an outstanding performance. We think that he will be replaced by Rohit Sharma in this match but he can get a chance in regular matches. Australia had beaten New Zealand in their first warm-up match.

We saw some poor performance by the bowling department of India as they leaked 188 runs in their 20 overs inning. Bhuvneshwar Kumar was the worst performer from their side who was charged for 52 runs in his four overs bowled out and he also failed to pick any wicket. Will he get a chance in this match? this is a big question which will be answered in this match. The key bowler of India, Mohammad Shami also leaked plenty of runs but he also picked wickets. He picked three-wicket in his four overs against 40 runs. Rahul Chahar was the other bowler who was charged for plenty of runs. Ashwin and Jasprit Bumrah were the economical bowlers.

There is no doubt that the batting order of India and strong and experienced when they come to the T20 format of cricket. They chased the target of 189 runs with six balls to spare. Ishan Kishan was the highest run-scorer from their side who remained not out after scoring 70 runs at the strike rate of 152. He smashed seven boundaries and three huge sixes during his inning. KL Rahul also put some runs on the board. He scored 51 runs on just 24 balls. He smashed six boundaries and three sixes during his inning. Rishabh Pant also performed well and scored 29 runs at the strike rate of 207.

Australia performed well in their first warm-up match against New Zealand. The bowling unit of Australia performed well and leaked 158 runs in their inning of 20 overs. Kane Richardson was the highest run-scorer from their side who picked three wickets in his four overs bowled out against 24 runs. Adam Zampa was another good performer by Australia. He leaked 17 runs in his four overs and picked two wickets. Ashton Agar and Mitchell Starc picked one wicket each.

The performance of the batting order of Australia was not outstanding but they managed to chase the target of 159 runs in 19.5 overs. Steven Smith was the highest run-scorer from their side with 35 runs to his name. Marcus Stoinis scored 28 runs while Mitchell Marsh and Aaron Finch scored 24 runs each. Ashton Agar scored 23 runs. David Warner and Matthew Wade failed to open their account on the scoreboard.

India had faced Australia in 23 T20 matches where India had won 13 while Australia had won 9 matches. One match between these two teams was ended with no result.

KL Rahul, Adam Zampa, and Rishabh Pant are key players to watch in this match..

The Warm-up Match 14 match of World Cup T20 2020-21 is going to be held at ICC Academy Ground, Dubai. We had observed in the previous matches played here that the pitch here at this venue is good for batting. The track is slower than the others we have seen and helps the spinners quite a bit. We are hoping that the surface is bound to get slower and be a bit more difficult for batting in this match. A score of 180 is going to be tough to chase.

Who Will Win India vs Australia, Warm-up Match 14 WTC 21