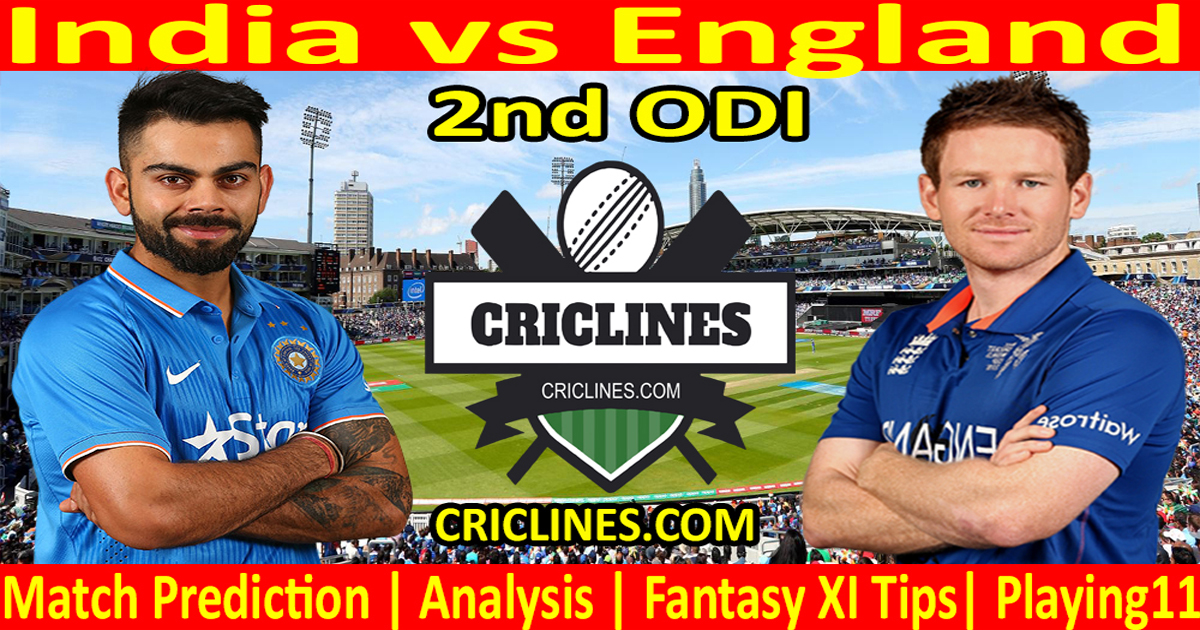 The world is ready to witness yet another big battle of ODI cricket. The 2nd ODI match of the England tour of India is scheduled to be held on Friday, 26th March 2021 at Maharashtra Cricket Association Stadium, Pune. We are posting safe, secure, and accurate today match prediction of all matches of England and India.

After winning the T20 series, India had a good start to this series of three ODIs and won the first match with a handsome margin of 66 runs. They lost the toss and were asked to bat first. The way how their batting order performed in that match was just outstanding. They scored a total of 317 runs in their inning of 50 overs. Almost all batsmen from their side put some runs on the board. Shikhar Dhawan was the highest run-scorer from their side. He scored 98 runs on 106 deliveries with the help of 11 boundaries and two sixes but unfortunately, failed to score his well-deserved century. KL Rahul also had an outstanding performance with the bat in the previous match. He scored 62 runs while he faced just 44 balls and smashed four boundaries and the same huge sixes.

Krunal Pandya was the other batsman from India who scored fifty. He scored 58 runs while he faced 31 deliveries and smashed seven boundaries and two sixes. The skipper, Virat Kohli also performed well in the previous match. He scored 56 runs on 60 deliveries and smashed six boundaries. Like the batting, the bowling unit of India also performed well on the first ODI match. They defended the target of 318 runs and sent the all-team of India back to the pavilion on a total of 251 runs in 42.1 overs. Prasidh Krishna was the most successful and highest wicket-taker from their side who picked four wickets in his 8.1 overs bowled out against 54 runs. Shardul Thakur also had an outstanding performance with the ball. He picked three wickets in his six overs bowled out while he was charged for 37 runs. Bhuvneshwar Kumar picked two wickets while Krunal Pandya had one wicket to his name.

England lost the t20 series and also failed to have a kick start to the ODI series. The bowling unit of England failed to perform well. They failed to stop the strong batting order of team India from scoring the runs. They leaked 317 runs in their inning of 50 overs. Ben Stokes was the highest wicket-taker from their side who picked three wickets in his eight overs bowled out against just 34 runs. Mark Wood picked two wickets but he leaked plenty of runs. He was charged for 75 runs in his 10 overs bowled out. No other bowler from their side could manage to pick any wicket. Sam Curran, Tom Curran, Adil Rashid, and Moeen Ali were the bowlers who failed to pick any wicket.

The batting order of England had a good start and scored 135 runs for the first wicket partnership but after that, they lost the momentum and continued losing wickets. They failed to chase the target of 318 runs and were all-out on a total of 251 runs in 42.1 overs. Jonny Bairstow was the most successful and highest run-scorer from their side who scored 94 runs. He faced just 66 deliveries and smashed six boundaries and seven sixes. Jason Roy was the other batsman from their side who put some runs on the board. He scored 46 runs on 34 deliveries with the help of seven boundaries and one six. No other batsmen from their side could put some big runs on the board. Moeen Ali scored 30 runs while the skipper, Eoin Morgan could manage to score 22 runs.

India had played a total of 991 ODI matches so far with 515 wins to their name. They had lost 426 matches while their 41 matches were ended with no result and 9 matches were tied.

India had faced England in 101 ODI matches where India had won 54 while England had won 42 matches. Three matches between these two teams were tied and two matches were ended with no result.

India has a strong batting order on the side which in excellent form as we observed this in the first ODI match. They also had won both earlier matches played, so the winning chances of today match for India have been increased. The equation of winning chances of both teams for today match is mentioned as under.

The 1st match of this series is scheduled to be held at Maharashtra Cricket Association Stadium, Pune. Pitch here in this stadium is a batting favored and with a little bit of bounce that may help the seamers. Spinners can play a key role in this pitch. As per the cricket match prediction, a total of near about 310 runs should be as par.

Who Will Win India vs England 2nd ODI

Who Will Win India vs England 2nd ODI Toss-ENG

Who Will Win India vs England 2nd ODI Match-ENG