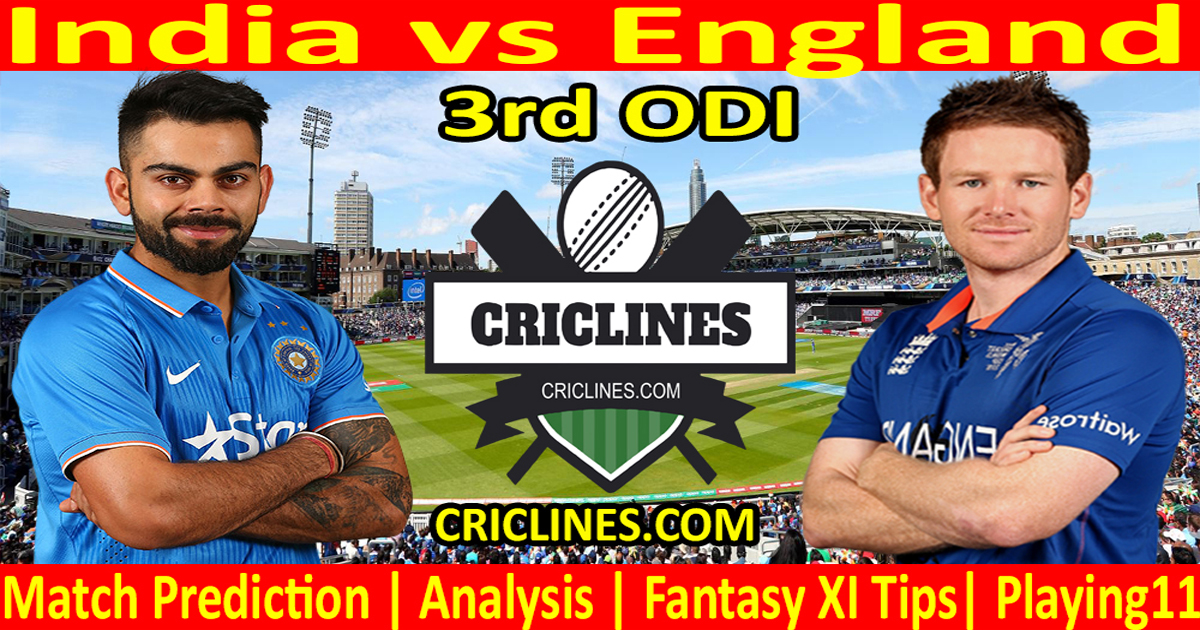 The cricket fans are ready to witness yet another big battle of the ODI cricket. The 3rd ODI match of the England tour of India is scheduled to be held on Sunday, 28th March 2021 at Maharashtra Cricket Association Stadium, Pune. We are posting safe, secure, and accurate today match prediction of all matches of England and India.

India won the opening ODI match but they were beaten by England in the second match by a huge margin of six wickets even after performing well. They lost the toss and were asked to bat first. The way how their batting order performed in that match was just outstanding. They put a total of 336 runs in their inning of 50 overs. KL Rahul was the most successful and highest run-scorer from their side who scored his century. He scored a total of 108 runs on 114 deliveries with the help of seven boundaries and two sixes during his inning. Rishabh Pant also had an outstanding performance with the bat in the previous match. He scored 77 runs while he faced 40 balls and smashed three boundaries and seven huge sixes during his inning. The skipper, Virat Kohli was the other batsman from the India side who put some runs on the board.

Virat Kohli scored 66 runs while he faced 79 deliveries and smashed three boundaries and one six. Hardik Pandya scored 35 runs on just 16 deliveries while Rohit Sharma had 25 runs to his name. India lost the previous match due to the worst performance by their bowling department. They failed to defend the target of 337 runs and leaked this target in 43.3 overs. Prasidh Krishna was the only successful bowler from their side who picked two wickets in his 10 overs bowled out against 58 runs. Bhuvneshwar Kumar picked one wicket in his 10 overs bowled out while he was charged for 63 runs. Shardul Thakur, Kuldeep Yadav, and Krunal Pandya were the bowlers who failed to give the best performance and pick any wicket. Krunal Pandya leaked 72 runs in just six overs bowled out while Kuldeep Yadav was charged for 84 runs.

England lost the first match of this series but they bounced back strongly and won the previous match with a handsome margin of six wickets with 39 balls in hand. The performance of their bowling department was not impressive in that match. They leaked 336 runs in their inning of 50 overs. R Topley was the most successful bowler from their side who picked two wickets in his eight overs bowled out while he was charged for 50 runs. Tom Curran also picked two wickets but he leaked plenty of runs. He leaked 83 runs in his 10 overs bowled out. Sam Curran and Adil Rashid picked one wicket each in the previous match while Ben Stokes and Moeen Ali were the bowlers who failed to pick any wicket in the previous match.

The way how the batting order of England performed in the previous match was just outstanding. They chased the target of 337 runs in 43.3 overs. Almost all batsmen from their side put some runs on the board. Jonny Bairstow was the most successful and highest run-scorer from their side who scored a total of 124 runs. He faced 112 deliveries and smashed 11 boundaries and 7 huge sixes. Ben Stokes also had an outstanding performance with the bat in the previous match. He scored 99 runs on 52 balls with the help of four boundaries and 10 sixes. Jason Roy was the other batsman from their side who scored 55 runs on 52 deliveries and smashed seven boundaries and one-six.

India had played a total of 992 ODI matches so far with 516 wins to their name. They had lost 426 matches while their 41 matches were ended with no result and 9 matches were tied.

India had faced England in 102 ODI matches where India had won 55 while England had won 42 matches. Three matches between these two teams were tied and two matches were ended with no result.

India has a strong batting order on the side which in excellent form as we observed this in the first ODI match. They also had won both earlier matches played, so the winning chances of today match for India have been increased. The equation of winning chances of both teams for today match is mentioned as under.

The 1st match of this series is scheduled to be held at Maharashtra Cricket Association Stadium, Pune. Pitch here in this stadium is a batting favored and with a little bit of bounce that may help the seamers. Spinners can play a key role in this pitch. As per the live cricket score, a total of near about 330 runs should be as par.

Who Will Win India vs England 3rd ODI

Who Will Win India vs England 3rd ODI Toss-ENG

Who Will Win India vs England 3rd ODI Match-IND