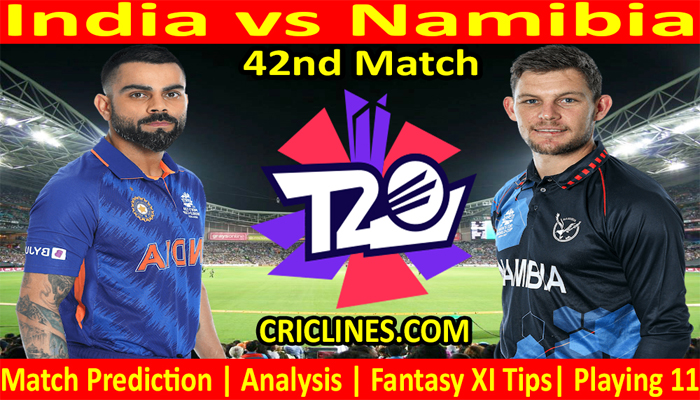 The world is ready to witness yet another big battle of World Cup T20. The 42nd Match of World Cup T20 2021 is scheduled to play between India and Namibia on Monday, 8th November 2021 at Dubai International Cricket Stadium, Dubai. We are posting safe, accurate, and secure today match prediction of ICC T20 World Cup free.

The group stage of the ICC T20 World Cup is going to complete after this match as they will be the last league stage match of the group stage. India had been knocked out from the semi-finals and this match will be just a formality. Namibia had won one out of four matches they had played so far. They beat Scotland but were beaten by New Zealand, Pakistan, and Afghanistan.

Team India came back to the form that they are known for too late. They lost early matches against Pakistan and New Zealand and this is the key reason they are out. This will be the last match of Virat Kohli as captain. We think that this match will be a final send-off for the senior players and we are not expecting many changes in the final playing eleven. KL Rahul and Rohit Sharma will open the batting for India followed by Virat Kohli and Suryakumar Yadav.

Namibia was beaten by New Zealand in their most recent match by the margin of 52 runs. The performance of their bowling unit was not bad. They leaked 163 runs in their inning of 20 overs. Gerhard Erasmus, David Wiese, and Bernard Scholtz picked one wicket each while Ruben Trumpelmann, JJ Smit, Loftie-Eaton, and Karl Birkenstock were the bowlers who failed to pick any wicket in the previous match against New Zealand.

The batting order of Namibia also failed to perform well. They scored 111 runs in their inning of 20 overs while chasing the target of 164 runs. Michael van Lingen was the highest run-scorer from their side who scored 25 runs with the help of two boundaries and one huge six. Stephan Baard scored 21 runs while Zane Green could manage to score scored 23 runs.

India had never faced Namibia in T20 matches and this will be the first T20 match between these two teams.

KL Rahul, Mohammad Shami, and David Wiese are the key players to watch in this match.

The 42nd Match of World Cup T20 2021 is going to be held at Dubai International Cricket Stadium, Dubai. We had observed in the previous matches played here that the pitch here at this venue is good for batting. The track is slower than the others we have seen and helps the spinners quite a bit. We are hoping that the surface is bound to get slower and be a bit more difficult for batting in this match. A score of 170 is going to be tough to chase.

Who Will Win India vs Namibia, 42nd Match WTC 21