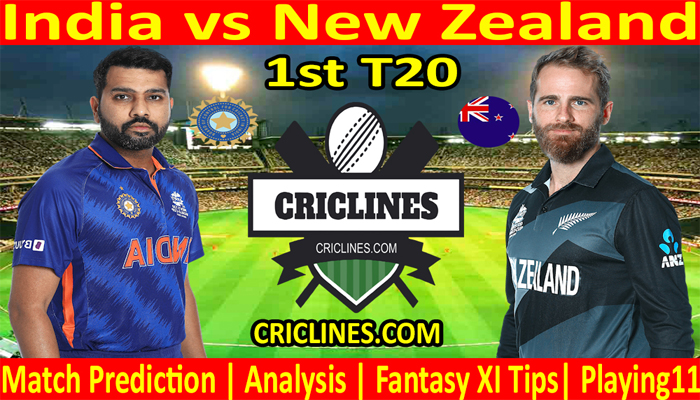 The cricket fans are ready to witness yet another big battle of T20 cricket. The 1st T20 match of the New Zealand tour of India, 2021 is scheduled to be held on Wednesday, 17th November 2021 at Sawai Mansingh Stadium, Jaipur. We are providing 100 safe, perfect and accurate today match prediction of India and New Zealand.

India had the worst campaign in recently played ICC T20 World Cup especially in two early matches against Pakistan and New Zealand. Team India bounced back strongly after losing two matches but it was too late and they could not qualify for the semi-finals. Now they are going to face New Zealand in the series of three T20 and two test matches at their home conditions. On the other side, New Zealand had played the final of the T20 World Cup and will come in this match as a favorite team. We all know that it is never easy to win against India in India and this match is going to be very interesting.

India has a new leader for this and the next T20 series. Rohit Sharma is going to lead team India after the resign of Virat Kohli. The ex-captain will also be missing from this series. Some key players who were part of the squad in the World Cup like Rahul Chahar, Varun Chakravarthy, and Hardik Pandya had been dropped from this home series. India is trying to set a new team for the next ICC T20 World Cup which is going to be held next year. We have no doubt that the batting order of India is strong and experienced and they are very dangerous when they play in the home conditions.

KL Rahul and Rohit Sharma will be opening the batting for India. We can also expect that Ruturaj Gaikwad will also play this match while Rishab Pant, Venkatesh Iyer, and Shreyas Iyer will be handling the middle batting order of India. Like the batting, India has a strong bowling unit on their side. Yuzvendra Chahal is back in the team and he is the bowler who will be very difficult to play for the batters of New Zealand. Harshal Patel is the other bowler who had been outstanding with the ball in the recent edition of IPL and he has a good record while playing in the home venues. Mohammad Siraj, Bhuvneshwar Kumar, and Avesh Khan are also part of the bowling unit of India.

New Zealand had been just outstanding in the recent season of ICC T20 World Cup. They reached to final but they could not win the title as they were beaten by Australia in the final match. Devon Conway was injured in the semi-final and New Zealand had not announced any player as his replacement for this series against India. The batting order of New Zealand will be dependent on Kane Williamson, Martin Guptill, and Daryll Mitchell for run-scoring. Glenn Phillips and the skipper, Kane Williamson had a lot of experience playing in the conditions of India, and both batsmen will be a big danger for India.

The bowling unit of New Zealand is good and they had played a lot of T20 matches in India especially Ish Sodhi and Mitch Santner. You should know that Ish Sodhi is a bowler who had picked his maximum T20 International wickets against India. Adam Milne, Tim Southee, and Trent Boult are the other bowlers who lead the bowling unit of India. New Zealand is a well-setteled team and it will be very difficult for India to beat this team in this series of three T20 matches.

India had played a total of 150 T20 matches so far. They won 95 matches while other teams won 51 matches. 4 matches of India were ended with no result and.

New Zealand had played 157 T20 matches right now with 80 wins to their name while they had lost 73 matches while their 4 matches were ended with no result.

India had played 17 T20 matches against New Zealand where they won 8 matches while New Zealand had won 9 matches.

The 1st T20 match between India and New Zealand is going to be played at the Sawai Mansingh Stadium, Jaipur. The pitch at this stadium is excellent for batting. The boundaries at this venue are short and will bring the spinners into play. The pitch will continue to be good for batting throughout the match. A total of 190 can be difficult for batting second to chase.

The weather forecast in Jaipur on match day is not very good. There are some chances of rain but and that is possible that we may have an interrupted match.

Who Will Win India vs New Zealand 1st T20

Who Will Win India vs New Zealand 1st T20 Toss-IND

Who Will Win India vs New Zealand 1st T20 Match-IND

Dream11 prediction for India vs New Zealand. After checking the latest player’s availability, the Dream 11 Team for this match of India and New Zealand is mentioned under.