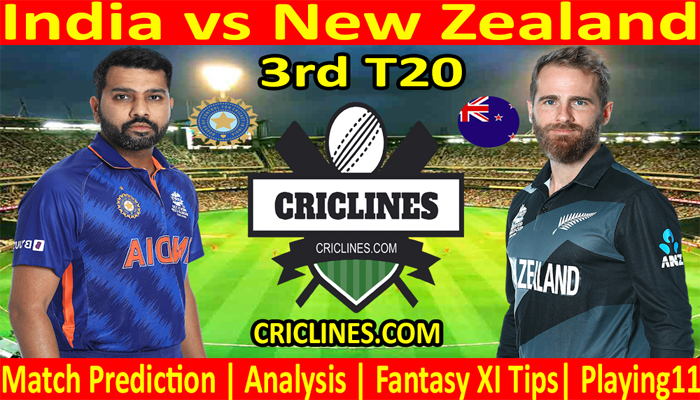 The cricket fans are ready to witness yet another big battle of T20 cricket. The 3rd T20 match of the New Zealand tour of India, 2021 is scheduled to be held on Sunday, 21st November 2021 at Eden Gardens, Kolkata. We are providing 100 safe, perfect, and accurate today match prediction of India and New Zealand.

India had won this home series against New Zealand with 2-0 and now has a golden chance to clean sweep. New Zealand was the favorite team when they came to play this series but they had totally failed to give the performance as many New Zealand fans were expecting. They have to win this match or will face a clean sweep.

The performance of the bowling unit of team India was just superb in the 2nd T20 match. They leaked just 153 runs in their inning of 20 overs. Harshal Patel, who was playing his first T20 match, was the highest wicket-taker from their side who picked two wickets in his four overs bowled out against just 25 runs. Bhuvneshwar Kumar, Deepak Chahar, Axar Patel, and Ravi Ashwin picked one wicket each.

The performance of the batting order of India was also outstanding. They chased the target of 154 runs in 17.2 overs. The opening pair of this team was just superb. They scored 117 runs for the partnership of 1st wicket. KL Rahul was the highest run-scorer from their side who scored 65 runs on 49 deliveries with the help of six boundaries and two huge sixes. The skipper, Rohit Sharma also had an outstanding performance with the bat. He scored while he faced 36 balls and smashed one boundary and five huge sixes during his inning.

The performance of the batting order of New Zealand was not good in the previous match. They could manage to score just 153 runs on a pitch that was in much favor of the batting. Glenn Phillips was the highest run-scorer from their side who scored 34 runs on 21 balls with the help of one boundary and three huge sixes. Daryl Mitchell and Martin Guptill scored 31 runs each while Mark Chapman could manage to score 21 runs.

The bowling unit of New Zealand once again failed to perform well. They could not defend a low target on the board and leaked the target of 154 runs in 17.2 overs. The skipper, Tim Southee was the only successful bowler from their side who picked three wickets in his four overs bowled out against 16 runs. Trent Boult, Mitchell Santner, Adam Milne, Ish Sodhi, and James Neesham were the bowlers who failed to pick any wicket.

India had played a total of 152 T20 matches so far. They won 97 matches while other teams won 51 matches. 4 matches of India were ended with no result and.

New Zealand had played 159 T20 matches right now with 80 wins to their name while they had lost 75 matches while their 4 matches were ended with no result.

India had played 19 T20 matches against New Zealand where they won 10 matches while New Zealand had also won 9 matches.

The 3rd T20 Match match between India and New Zealand is going to be played at Eden Gardens, Kolkata. The pitch at this stadium is excellent for batting. The boundaries at this venue are short and will bring the spinners into play. The pitch will continue to be good for batting throughout the match. A total of 190 can be difficult for batting second to chase.

The weather forecast in Kolkata on match day is not very good. There are some chances of rain but and that is possible that we may have an interrupted match.

Who Will Win India vs New Zealand 3rd T20 Match

Dream11 prediction for India vs New Zealand. After checking the latest player’s availability, the Dream 11 Team for this match of India and New Zealand is mentioned under.