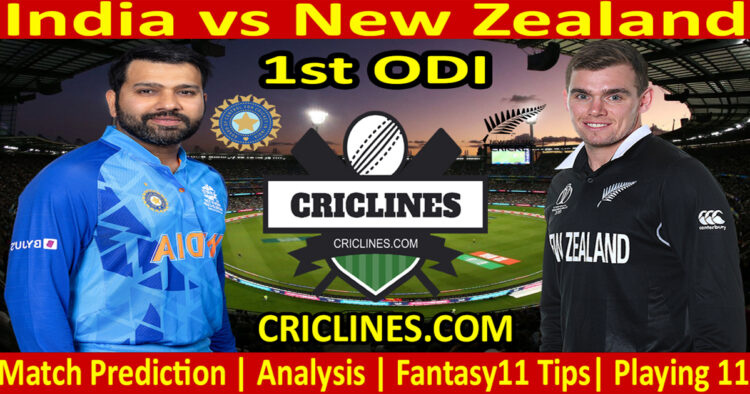 The cricket fans are ready to witness yet another big battle of ODI cricket. The 1st ODI match of the New Zealand tour of India, 2023 is scheduled to be held on Wednesday, 18th January 2023 at Rajiv Gandhi International Stadium, Hyderabad. We are posting 100 safe, perfect, and accurate today match prediction for all matches of India and New Zealand.

All teams are focusing on ODI cricket as ODI World Cup is scheduled this year. India had recently beat Sri Lanka in an ODI series and now is going to face New Zealand in three ODI match series. New Zealand had recently beaten Pakistan 2-1 and will be confident in this series. New Zealand is ranked as the number ODI team in ICC ODI ranking while India is holding the fourth position. As we know that ODI World Cup is going to be held in India, it is the best opportunity for New Zealand to get the best combination.

India had won 19 ODI series played at their home conditions. It was back in 2013 when India lost a home series against Pakistan but things are difficult now and it is very difficult for any team to beat India in India. It is also an interesting fact that India won 26 out of 35 ODI matches played against New Zealand at their home conditions and they lost just eight matches. India is a clear favorite team to win this match we have some questions about the batting lineup of team India. KL Rahul and Axar Patel had just been good in the recent ODI series but now had been dropped from this series.

We think that India will replace KL Rahul and Axar Patel with Ishan Kishan and Washington Sundar. Ishan Kishan is a regular opening batsman and we think that he will have to bat at another number or they will drop Shubhman Gill to get an opening place for Ishan Kishan. Rohit Sharma, Virat Kohli, and Shubhman Gill handled the top batting order of India against Sri Lanka and we think that they will replace Shubhman Gill with Ishan Kishan. Hardik Pandya, Shreyas Iyer, and Washington Sundar will handle the middle batting order. Mohammad Siraj was good against India and picked nine wickets in three ODI matches. He will be handling the bowling unit with Kuldeep Yadav, Umran Malik, and Mohammad Shami.

New Zealand is playing this series without Kane Williamson and Tim Southee. These both players were just good in the recent series against Pakistan. Kane Williamson was the highest run-scorer while Tim Southee picked the most wickets. Tom Latham is going to lead the blackcaps in the absence of Kane Williamson. There is a lot of depth in the batting order of New Zealand and India should not take this side lightly. Devon Conway and Finn Allen will open the batting inning of New Zealand. Henry Nicholls will be batting at number three. Finn Allen is an aggressive batsman and plays shorts freely in power play overs.

The pitches in India are flat and good for batting and we think that Finn Allen will perform well in this series. Devon Conway is in good form which is a good sign for New Zealand. He scored 153 runs in the ODI series against Pakistan. The middle batting order of New Zealand is also strong. Glenn Phillips, Daryll Mitchell, and Tom Latham will be taking care of the middle batting order. Mitchell Santner and Michael Bracewell can also bat well in the middle overs. These both batsmen are known as hard hitters and as we said earlier that pitches in India are good form batting, we are sure that these players will play a main role for New Zealand in this series.

India had played a total of 1023 ODI matches where they won 535 matches and opposing teams won 436 matches. Their 43 matches ended with no result and nine matches were tied.

New Zealand had played a total of 795 ODI matches so far. They won 366 while other teams won 381 matches. 42 matches of New Zealand came with no result six matches were tied.

India played 113 ODI matches against New Zealand where they won 55 matches and New Zealand had won 50 matches. 07 matches between New Zealand and India came without any result while one match was tied.

The 1st ODI match of the New Zealand tour of India is going to be held at Rajiv Gandhi International Stadium, Hyderabad. The pitch at this stadium is excellent for batting. The boundaries at this venue are short and will bring the spinners into play. The pitch will continue to be good for batting throughout the match. It also has a bit of help for the spin bowlers. As per the live cricket score, a total of 300 runs should be par score.

The weather forecast in Hyderabad on match day is good for a cricket game. There are almost no chances of rain and we may have a full match to watch.

We had provided you with the above-mentioned IND vs NZ prediction on the basis of our research, understanding, and analysis. You can consider the point we had provided you and the final decision will be yours that you have to make at your own risk.