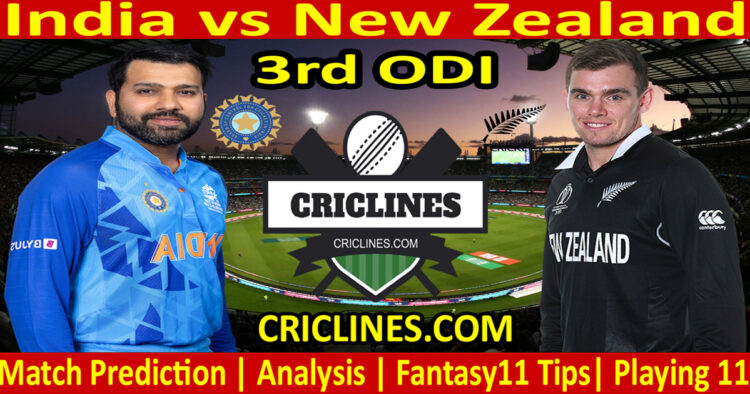 The cricket fans are ready to witness yet another big battle of ODI cricket. The 3rd ODI match of the New Zealand tour of India, 2023 is scheduled to be held on Tuesday, 24th January 2023 at Holkar Cricket Stadium, Indore. We are posting 100 safe, perfect, and accurate today match prediction for all matches of India and New Zealand.

India had won the series of three ODI matches against New Zealand already and now has a golden chance to clean sweep Blackcaps. India has its key strength in batting but we saw the bowlers shining in the second ODI match. New Zealand is a strong batting side but totally collapsed in the previous match. Can New Zealand avoid whitewashing against India in their home conditions? the result of this match will clear the picture.

India did not make changes in the bowling unit and played the second match with almost the same bowlers as the first ODI match. India will be confident with its bowlers as their batting order is already in superb form and we think that now it is very difficult for any team to beat India in India. ICC ODI will also be going to be held in India and we think that India had got the best combination for this big event of ODI cricket. The bowlers of India totally destroyed the batting order of New Zealand in the second ODI match and their key five batsmen back to the pavilion on a total of just 15 runs they send the full team of New Zealand back to the pavilion just 108 runs in 34.3 overs. Almost all Indian bowlers performed well and picked wickets.

Mohammad Shami proved the highest wicket-taker from India with three wickets to his account in six overs against just 18 runs. Washington Sundar also performed well and picked up two wickets in three overs against just 7 runs. Hardik Pandya also picked two wickets in six overs while he was charged with 16 runs. Mohammad Siraj, Shardul Thakur, and Kuldeep Yadav picked one wicket each. The batting order of India also performed well and chased the target of 109 runs in 20.1 overs. Rohit Sharma is in good form and he was the highest run-scorer in the previous match. He scored 51 runs on 50 balls with the help of seven boundaries and two huge sixes. Shubman Gill is another Indian player who is performing well these days. He scored 200 runs earlier and remained not out after scoring 40 runs in the previous match on 53 balls with the help of six boundaries.

New Zealand had lost the ODI series earlier and will play this math with full force to avoid a whitewash. We have no doubt that the batting order of New Zealand is very strong but they totally collapsed in the previous match. Glenn Phillips, M Bracewell, and Santner spent some time on the crease but their big names like Finn Allen, Devon Conway, Henry Nicholls, Daryl Mitchell, and Tom Latham totally failed to put some big runs on the board. Glenn Phillips proved the highest run-scorer with just 36 runs to his name. Mitchell Santner scored 27 runs while M Bracewell scored just 22 runs.

Daryl Mitchell, Tom Latham, and Lockie Ferguson scored just one run each while Finn Allen failed to open the account on the scoreboard. Henry Nicholls, Henry Shipley, and Blair Tickner scored just two runs each. Remember that eight batsmen of New Zealand failed to enter into the double figure in the previous match. The bowling unit of New Zealand is also strong but failed to defend a low target on the board and leaked the target of 109 runs in 20.1 overs. Henry Shipley was the most successful bowler from their side with one wicket to his name in five overs against 29 runs. Mitchell Santner also picked one wicket while he was charged with 28 runs in 4.1 overs. Lockie Ferguson, Lockie Ferguson, and Michael Bracewell failed to pick any wicket.

India had played a total of 1025 ODI matches where they won 537 matches and opposing teams won 436 matches. Their 43 matches ended with no result and nine matches were tied.

New Zealand had played a total of 797 ODI matches so far. They won 366 while other teams won 383 matches. 42 matches of New Zealand came with no result six matches were tied.

India played 115 ODI matches against New Zealand where they won 57 matches and New Zealand had won 50 matches. 07 matches between New Zealand and India came without any result while one match was tied.

The 3rd ODI match of the New Zealand tour of India is going to be held at Holkar Cricket Stadium, Indore. The pitch at this stadium is excellent for batting. The boundaries at this venue are short and will bring the spinners into play. The pitch will continue to be good for batting throughout the match. It also has a bit of help for the spin bowlers. As per the live cricket score, a total of 300 runs should be a par score.

The weather forecast in Indore on match day is good for a cricket game. There are almost no chances of rain and we may have a full match to watch.

We had provided you with the above-mentioned today cricket match prediction on the basis of our research, understanding, and analysis. You can consider the point we had provided you and the final decision will be yours that you have to make at your own risk.