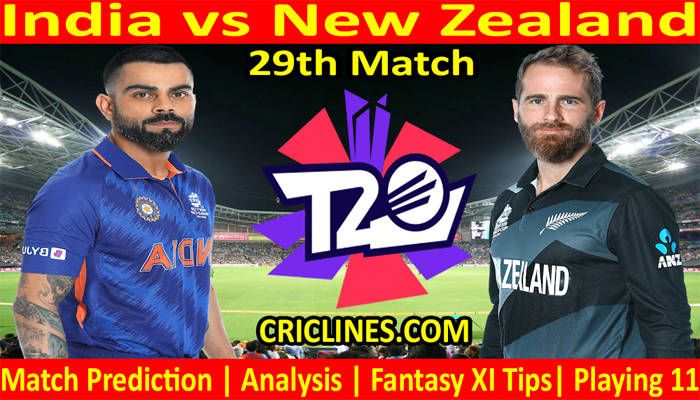 The world is ready to witness yet another big battle of World Cup T20. The 28th Match of World Cup T20 2021 is scheduled to play between India and New Zealand on Sunday, 31st October 2021 at Dubai International Cricket Stadium, Dubai. We are posting safe, accurate, and secure today match prediction of ICC T20 World Cup free.

India had lost their very first match of ICC T20 World Cup against Pakistan by the margin of 10 wickets. This happened for the first time in the history of cricket India that they lost a T20 match by this kind of big margin. This is the match that may decide the semi-finalist team. You may know that India had never beaten New Zealand since 2003 in the ICC event. New Zealand is the other team that was beaten by Pakistan in their first match but they tough time with Pakistan.

The top batting order of India was destroyed by Shaheen Afridi in their first match but we also have some positive signs. Virat Kolhi showed that he can bat well in pressure situations. He scored fifty and also was the highest run-scorer from their side with 57 runs to his name. Rishabh Pant was the other batsman who showed some good power hitting and scored 39 runs with the help of two boundaries and the same huge sixes. Both sixes came with one-handed. We fans are hoping that Ishan Kishan will have a chance to play this match but we don’t think that he can replace KL Rahul in this match.

Rohit Sharma and KL Rahul are the best openers of team India and had been successful in the past. Hardik Pandya, Suryakumar Yadav, and Rishab Pant are available to handle the middle batting order of India. We have no doubt that the batting order of India is strong and experienced and they can put a big total on the board against New Zealand. The performance of the bowling department of India is a big concern. In our opinion, Bhuvaneshwar Kumar will miss this match and Shardul Thakur will replace him. Varun Chakravarthy is the other bowler who may be replaced with Rahul Chahar or maybe R Ashwin.

New Zealand had a grip over the match against Pakistan and they were in the winning situation but Asif Ali and Shoaib Malik faced their bowling unit very well. We don’t think that the performance of the batting order of New Zealand was good. They were at least 20 runs short. They could manage to score 134 runs in their inning of 20 overs. Daryl Mitchell was the most successful batsman from their side who scored 27 runs. He faced 20 deliveries and smashed one boundary and two huge sixes during his inning. Devon Conway was the other batsman who put some runs on the board. He also scored 27 runs.

Kane Williamson scored 25 runs on 26 balls with the help of three boundaries. Martin Guptill scored 17 runs. The performance of the bowling unit of New Zealand was good even they leaked a low total on the board. They were charged for the target of 135 runs in 18.4 overs. Ish Sodhi was the most successful and highest wicket-taker from their side who picked two wickets in his four overs bowled out while he was charged for 28 runs. Mitchell Santner, Tim Southee, and Trent Boult picked one wicket each while James Neesham was the only bowler from their side who failed to pick any wicket.

India had played a total of 16 matches against New Zealand where they won eight while New Zealand had also won 8 matches.

Virat Kohli, Kane Williamson, and KL Rahul are key players to watch in this match.

The 28th Match of World Cup T20 2021 is going to be held at Dubai International Cricket Stadium, Dubai. We had observed in the previous matches played here that the pitch here at this venue is good for batting. The track is slower than the others we have seen and helps the spinners quite a bit. We are hoping that the surface is bound to get slower and be a bit more difficult for batting in this match. A score of 170 is going to be tough to chase.

Who Will Win India vs New Zealand, 28th Match WTC 21