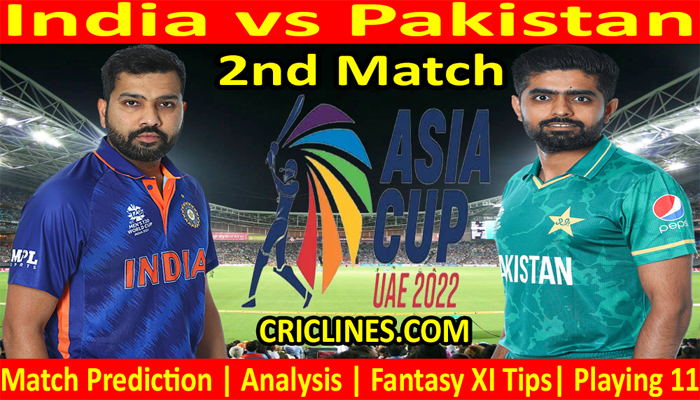 The world is ready to witness yet another big battle of Asia Cup T20. The 2nd Match of Asia Cup T20 2022 is scheduled to play between India and Pakistan on Sunday, 28th August 2022 at Dubai International Cricket Stadium, Dubai. We are posting safe, accurate, and secure today match prediction for the Asia Cup free.

The biggest rivals of cricket are going to face each other in the second match of the Asia Cup 2022. India and Pakistan will play at least two and possibly three matches in this tournament. India has a decent record while playing against Pakistan but Pakistan just dominated India in the previous T20 match of the T20 World Cup 2022. Remember that this match on going to be held at the same venue where Pakistan beat India back in 2021 but now things are very different. Almost all best match prediction providers are favoring India to win this match and we also believe that India will give surely a tough time to Pakistan in this match.

India is playing the first big tournament of cricket after the worst performance in T20 World Cup where they could not even qualify for the semi-finals. Team India is now changed and they also have changed the playing strategy and adopted an attacking strategy. They will surely take more risks and we had observed that this strategy had worked for India in the previously played matches. The batting order of India is the strongest and they will start scoring the runs from the start and they will avail the opportunities of power play. We have some questions regarding the batting order of India. KL Rahul, Rohit Sharma, and Virat Kohli are the top three batters. The form of Kohli had not been good in recent times and this tournament is a big opportunity for him to prove it. SK Yadav will be batting at number four with Hardik Pandya available at number five.

Ravindra Jadeja is a dangerous batter in the middle and last overs and we think that he will be batting at number seven. One batter from Rishab Pant and Dinesh Karthik will have a chance to play this match. The bowling department of India is also strong and experienced but not strong than the batting department. The batting order of India has to put a handsome total on the board which may be easy for the bowlers to defend. Arshdeep Singh, Bhuvaneshwar Kumar, and Yuzvendra Chahal are the leading bowlers of India while Hardik Pandya will also be used as a bowler in the middle overs. India had won most matches they played after the T20 World Cup and they also had won four out of five most recent matches against Pakistan.

Pakistan faced bad news right before the start of Asia Cup 2022 as their leading bowler, Shaheen Afridi had been ruled out from this tournament because of his knee injury. He is the leading bowler of Pakistan and almost destroyed the batting order of India in T20 World Cup 2021. The injury of Shaheen Afridi had affected the strength of the bowling unit of Pakistan but they have some other best options to choose the best. The key strength of Pakistan is their batting department in this tournament. Babar Azam is the number one batsman in almost all formats of cricket and has a lot of responsibilities on his shoulders. He is the backbone of Pakistan’s batting and also has a decent record while chasing. He also had been criticized due to his low strike rate. Babar Azam will have the support of Mohammad Rizwan and Fakhar Zaman in the top order. These three batters had been just outstanding after T20 World Cup and had scored a lot of runs for Pakistan. The record of Pakistan shows that they don’t lose wickets early and the top three batters’ scores run in the power play overs.

The middle batting order of Pakistan is not much stronger where Shadab Khan, Khushdil Shah, and Asif Ali are available. These three batters were known as finishers in Pakistan Super League and they should make an impact in this match. Asif Ali was just superb in T20 World Cup against Afghanistan and New Zealand and due to his big sixes, Pakistan won the matches against these teams. The bowling department of Pakistan is not much stronger but good after the absence of Shaheen Afridi. Mohammad Wasim Jr is the other bowler who had been ruled out due to injury. Now Mohammad Nawaz, Haris Rauf, and Hasan Ali are available to handle the bowling department. We think that one bowler from Naseem Shah and Mohammad Hasnain will have a chance to play this match. Mohammad Hasnain had played in The Hundred League recently where he picked early wickets but also leaked plenty of runs.

India had played a total of nine matches against Pakistan where they won seven matches while Pakistan had won just two matches.

India is a very strong and experienced team in T20 cricket and we have no doubt that they are overall a strong team as compared to Pakistan at least on papers. According to our cricket match prediction, India is the favorite team who will win this match. There are many factors that make India a favorite team to win this match. Some of the key reasons are mentioned as under:

India is the combination of experienced and young players of the t20 foramt. The batting order of this team is also strong and some well-known hitters of the t20 format are part of the squad of this team, so the winning chances of today’s match for India have been increased. The equation of who will win today’s cricket match prediction and who will win the cricket match today is mentioned as under.

The toss is going to play an important role in the decision of all matches of Asia Cup T20. Having a good total on the board is always a big advantage in these kinds of big matches. According to toss prediction, the team who will win the toss may choose to bat first.

The 2nd Match of Asia Cup T20 2022 is going to be held at Dubai International Cricket Stadium, Dubai. This pitch is offering a flat batting surface with a huge amount of pace and bounce. The track is slower than the others we have seen and helps the spinners quite a bit. We are hoping that the surface is bound to get slower and be a bit more difficult for batting in this match. A score of 170 to 180 is going to be tough to chase.

The weather forecast in Dubai will be hot and will also test the players physically. It is predicting some clouds around on match day but the weather forecast does not predict rain. We should be able to have a full uninterrupted match.

Who Will Win India vs Pakistan, 2nd Match Asia Cup 2022

We had provided you above-mentioned cricket match prediction on the basis of our research, understanding, and analysis. You can consider the point we had provided you with and the decision will be yours that you have to make.