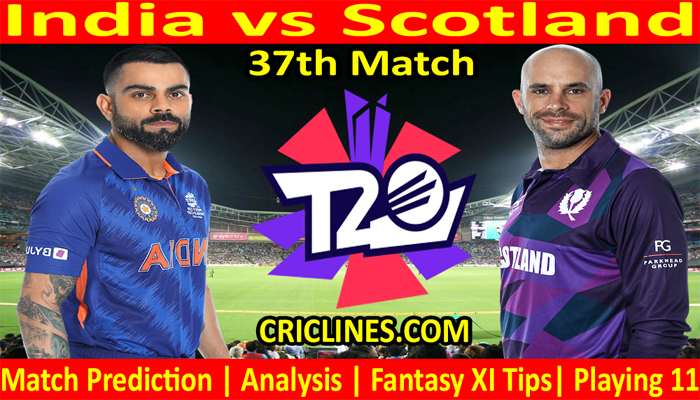 The cricket fans are ready to witness yet another big battle of World Cup T20. The 37th Match of World Cup T20 2021 is scheduled to play between India and Scotland on Friday, 5th November 2021 at Dubai International Cricket Stadium, Dubai. We are posting safe, accurate, and secure today match prediction of ICC T20 World Cup free.

India registered its first win in ICC T20 World Cup 2021 by beating Afghanistan in their 3rd match. This was just an outstanding performance by team India even it come later than required. Their eyes will be on the match of Afghanistan vs New Zealand match and if Afghanistan may defeat New Zealand, India has a clear chance to qualify for the semi-finals. Scotland had lost all three matches played so far.

The batting order of India performed well in the previous match and the way they are known for. They had 144 runs opening partnership and scored a total of 210 runs in their inning of 20 overs which is the highest total while batting first in this tournament. Rohit Sharma was the highest run-scorer from their side who scored 74 runs on 47 deliveries with the help of eight boundaries and three huge sixes. KL Rahul also had an outstanding performance with the bat. He scored 69 runs while he faced 48 balls and smashed six boundaries and two huge sixes.

Hardik Pandya showed some good form as he was being criticized for this performance in the previous matches against Pakistan and New Zealand. He smashed the inning of 35 runs on just 13 balls with the help of four boundaries and two huge sixes. Rishabh Pant scored 27 runs on just 13 balls. The bowling unit of India also performed well in the previous match. They defended the target of 211 runs and leaked 144 runs in their 20 overs inning. Mohammed Shami was the highest wicket-taker with three wickets to his name. Ravichandran Ashwin picked two wickets while Jasprit Bumrah and Ravindra Jadeja picked one wicket each.

Scotland played their most recent match against New Zealand where they lost by the margin of 16 runs. Their bowling unit totally failed to give the best performance. They leaked 172 runs in their inning of 20 overs. Safyaan Sharif was the most successful bowler from their side who picked two wickets in his four overs bowled out against 28 runs. Bradley Wheal also picked two-wicket but he leaked plenty of runs. He was charged for 40 runs in his four overs.

The performance of the batting order of Scotland was good but they failed to chase the target of 173 runs. They scored 158 runs in their 20 overs inning. Michael Leask was the most successful and highest run-scorer from their side who scored 42 runs on just 20 deliveries with the help of three boundaries and the same huge sixes. Matthew Cross scored 27 runs while George Munsey could manage to score 22 runs.

India had played just one T20 International match against Scotland which was ended without any result. This match was held back in 2007 at Kingsmead.

KL Rahul, Rohit Sharma, and Michael Leask are the key players to watch in this match.

The 37th Match of World Cup T20 2021 is going to be held at Dubai International Cricket Stadium, Dubai. We had observed in the previous matches played here that the pitch here at this venue is good for batting. The track is slower than the others we have seen and helps the spinners quite a bit. We are hoping that the surface is bound to get slower and be a bit more difficult for batting in this match. A score of 170 is going to be tough to chase.

Who Will Win India vs Scotland, 37th Match WTC 21