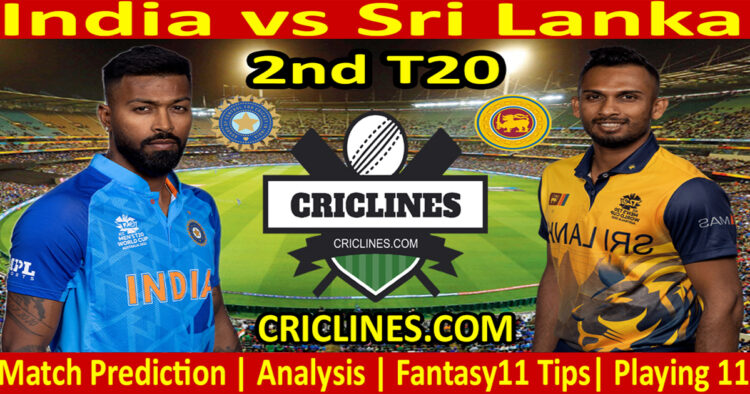 The world is ready to witness yet another big battle of T20 cricket. The 2nd T20 match of the Sri Lanka tour of India, 2023 is scheduled to be held on Thursday, 5th January 2023 at Maharashtra Cricket Association Stadium, Pune. We are posting 100 safe, perfect, and accurate today match prediction for all matches of India and Sri Lanka.

The first match of India and Sri Lanka was the same as we predicted. This was a thriller that was decided in the 20th over where India won with a margin of just two runs. The result of the first match shows that both remaining matches are going to be very interesting as both teams are playing well.

India is playing with a new team and they had rested their main players like Rohit Sharma, KL Rahul, and Virat Kohli. The management of team India is trying to get the best set of the players for upcoming ODI World Cup. Sri Lanka is Asian Champions and they showed their strength even though they were on the losing side.

The key batsmen of team India like Shubman Gill, Sanju Samson, and Suryakumar Yadav failed to put some big runs on the board and the rest of the batters put a competitive total on the board. Deepak Hooda, Hardik Pandya, Ishan Kishan, and Axar Patel played well with the bat. India scored a total of 162 runs in 20 as they lost the toss and were asked to bat first. Deepak Hooda proved the most successful and highest run-scorer from their side scoring 41 runs on 23 balls with the help of one boundary and three huge sixes. Axar Patel scored 31 runs while he faced 20 balls and smashed three boundaries and one huge six. Ishan Kishan was the other batsman who put some runs on the board. He scored 37 runs while the skipper, Hardik Pandya had 29 runs to his name.

The bowling unit of India was not much impressive in the first match but they managed to defend the target of 163 runs and leaked 160 runs in 20 overs. Hardik Pandya, Shivam Mavi, Umran Malik, Yuzvendra Chahal, Harshal Patel, and Axar Patel were used as bowlers by India. Arshdeep Singh is also part of the squad for this series and he was not given a chance in the final playing eleven. It was also interesting to see that Hardik Pandya bowled out the first over for India but failed to provide an early breakthrough. Shivam Mavi proved the most successful and highest wicket-taker with four wickets to his name in four overs against 22 runs. Umran Malik was also good in the first match and he picked up two wickets in four overs while he was charged for 27 runs. Harshal Patel also picked two wickets but he leaked plenty of runs. He was charged with 41 runs in four overs. Axar Patel and Yuzvendra Chahal failed to pick any wicket.

Sri Lanka was just outstanding in the first match against a strong opposition like India. The bowling and batting units of Sri Lanka were just good. They decided to bat first after winning the toss. The way how their bowling unit performed in the previous match was just outstanding. They leaked 162 runs in 20 overs against the strong batting order of India. Almost all bowlers from their side picked a wicket. W Hasaranga proved the most economical bowler with one wicket to his name in four overs against 22 runs. Dilshan Madushanka, M Theekshana, C Karunaratne, and Dhananjaya de Silva also picked one wicket each while Kasun Rajitha was the only bowler who remained wicketless.

The total of 163 runs was not much difficult to chase for Sri Lanka but their batting order was under the belts and failed to chase it. They scored 160 runs and their full team came back to the pavilion in 20 overs. Sri Lanka still needs to upgrade its batting squad for the remaining matches. The skipper, Dasun Shanaka was the highest run-scorer from their side with 45 runs to his name on 25 balls with the help of three boundaries and the same huge sixes. Kusal Mendis also had an outstanding performance with the bat and scored 28 runs. He faced 25 balls and smashed five boundaries during his inning. Chamika Karunaratne was the other batsman who put some runs on the board. He scored 23 runs and was the only batsman who remained not out till the 20th over. Wanindu Hasaranga performed well with the bat and scored 21 runs.

India had played a total of 194 T20 matches where they won 127 matches and opposing teams won 61 matches. Their 5 matches ended with no result.

Sri Lanka had played a total of 174 T20 matches so far. They won 79 while other teams won 93 matches. 2 matches of Sri Lanka ended with no result.

India played 27 T20 matches against Sri Lanka where they won 18 matches and Sri Lanka had won 7 matches. Just one match between Sri Lanka and India came without any result.

The 2nd T20 match of the Sri Lanka tour of India is going to be held at Maharashtra Cricket Association Stadium, Pune. The pitch at this stadium is excellent for batting. The boundaries at this venue are short and will bring the spinners into play. The pitch will continue to be good for batting throughout the match. The pitch on this venue is good for batting. It also has a bit of help for the spin bowlers. As per the live cricket score, a total of 185 runs should be a par score.

The weather forecast in Pune on match day is good. There are almost no chances of rain and we may have a full match to watch.

Dream11 Prediction for India vs Sri Lanka. After checking the latest player’s availability, the Dream 11 Team for this match of India and Sri Lanka is mentioned under.

We had provided you with the above-mentioned Aaj ka match prediction on the basis of our research, understanding, and analysis. You can consider the point we had provided you and the final decision will be yours.