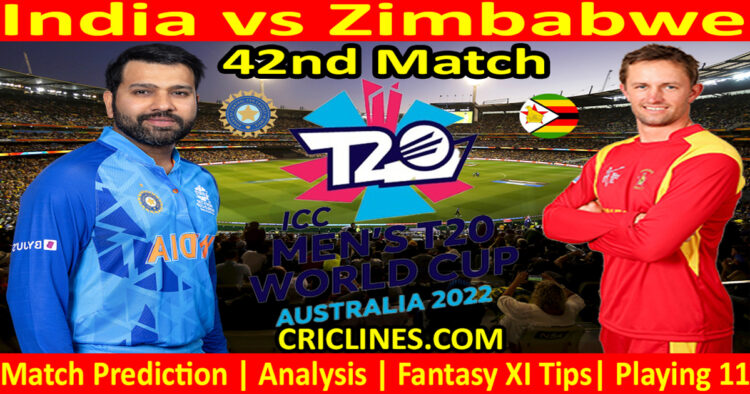 The world is ready to witness yet another big battle of World Cup T20. The 42nd match of World Cup T20 2022 is scheduled to play between India and Zimbabwe on Sunday, 6th November 2022 at Melbourne Cricket Ground, Melbourne. We are posting a safe, accurate, and secure today match prediction of the ICC T20 World Cup 2022.

India is the strongest candidate for the semi-finals from Super 12 Group 2. They are the best performers in this group. They also had played four matches with three wins to their name. They had lost just one match and are leading the points table of Super 12 Group 2. They had beaten Pakistan, Zimbabwe, and Netherlands but were beaten by South Africa. India still needs to win this match to cement its place in the semi-finals.

Zimbabwe is the second worst performing team of Super 12 Group 2. They had won just one out of four matches played. They had lost three matches and are laying at the second position from the bottom of the Super 12 Group 2 points table. They had beaten Pakistan but were beaten by South Africa, Bangladesh, and Netherlands.

The most recent match of India was very interesting against Bangladesh where they won with a margin of just five runs. They lost the toss and were asked to bat first. The way how their batting order performed in the previous match was just outstanding. They scored a total of 184 runs in 20 overs. Virat Kohli was once again the most successful and highest run-scorer from their side who remained not out after scoring 64 runs. He faced 44 balls and smashed eight boundaries and one huge six. KL Rahul was struggling with the form in the previous matches but he performed well and scored 50 runs on 32 balls with the help of three boundaries and four huge sixes. Suryakumar Yadav was the other batter who put some runs on the board. He scored 30 runs on just 16 balls with the help of four boundaries. Ravi Ashwin scored 13 runs on just six balls.

Hardik Pandya, Denish Karthik, Axar Pate, and the skipper, Rohit Sharma were the batters who failed to put some big runs on the board. India won the previous match due to the best performance by their bowling unit. They defended the target of 151 runs which was given through the DLS method and leaked 145 runs in 16 overs. Hardik Pandya was the most successful bowler from their side who picked two wickets in three overs against 28 runs. Arshdeep Singh also performed well and picked two wickets in four three while he was charged for 27 runs. Mohammed Shami was the other bowler who performed well and had a wicket to his name. He picked one wicket in three overs while he was charged with 25 runs. Bhuvneshwar Kumar, Axar Patel, and Ravichandran Ashwin were the bowlers who failed to pick any wicket. Remember that Bhuvneshwar Kumar was charged with 27 runs in three overs.

Zimbabwe lost their previous match against Netherlands by a handsome margin of five wickets. They won the toss and decided to bat first. The batting order of this team almost collapsed in the previous match. They could manage to score just 117 runs and their full team came back to the pavilion in 19.2 overs. Just two batters of Zimbabwe could manage to enter into the double figure. Sikandar Raza was the only successful batter from their side who scored 40 runs on just 24 balls with the help of three boundaries and the same huge sixes. Sean Williams also performed well and scored 28 runs. He faced 23 balls and smashed three boundaries during his inning. Nine batters of Zimbabwe failed to cross the double figure.

The bowling unit of Zimbabwe also failed to give the best performance in the previous match and leaked the target of 118 runs in just 18 overs. Richard Ngarava was the only successful bowler from their side who picked two wickets in four overs against just 18 runs. Blessing Muzarabani was the other bowler who picked two wickets in four overs and bowled out while he was charged with 23 runs. Luke Jongwe also had a wicket to his name but he leaked a lot of runs. He picked one wicket while he was charged with 25 runs in just two overs. Tendai Chatara, Sean Williams, and Sikandar Raza were the bowlers who failed to pick any wicket. Tendai Chatara leaked 22 runs in four overs while Sean Williams was charged with 21 runs in three overs.

India had played 7 matches against Zimbabwe where they had won 5 matches while Zimbabwe had won just two matches.

The 42nd match of World Cup T20 2022 is going to be held at Melbourne Cricket Ground, Melbourne. We had observed in the previous matches played here that the pitch here at this venue is good for batting. The pitch is bouncy and fast and run-scoring is not much easy in early and middle overs. We are hoping that the surface is bound to get slower and be a bit more difficult for batting in this match. A score of 170 is going to be tough to chase.

Who Will Win India vs Zimbabwe, 42nd Match World Cup 2022

Virat Kohli, Arshdeep Singh, and Sikandar Raza are key players to watch in this match.