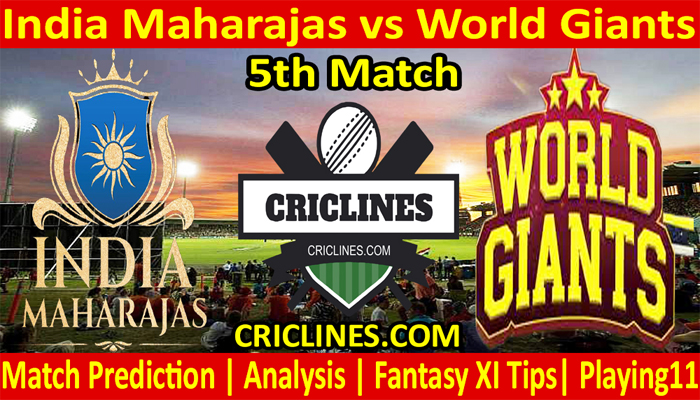 The world is ready to witness yet another big battle of T20 cricket. The 5th match of Legends League Cricket T20 2022 is scheduled to be held on Wednesday, 26th January 2022 between India Maharajas and World Giants at Al Amerat Cricket Ground (Ministry Turf 1), Al Amerat. We are posting safe, secure, and accurate today match prediction of Legend Cricket League.

India Maharajas had a kick start to this edition of Legends League and won their opening match but they had lost the next two matches in a row. They had played three matches with just one win to their name. They had lost two matches and are laying at the bottom of the points table.

The performance of World Giants had been average in this tournament. They had played two matches with one win and the other lost. They are situated at the second position on the ladder.

India Maharajas were beaten by Asia Lions in their most recent match by a huge margin of 36 runs. They won the toss and decided to field first. The performance of their bowling unit was not impressive. They leaked 193 runs in their inning of 20 overs. A Bhandari was the highest wicket-taker from their side who picked two wickets in his four overs bowled out against 41 runs. A Salvi and Binny picked one wicket each.

World Giants had beaten the same team, India Maharajas in their most recent match with a margin of three wickets. They won the toss and decided to field first. The performance of their bowling unit was not impressive. They leaked 209 runs in their inning of 20 overs. RJ Sidebottom was the most successful bowler from their side who picked two wickets in his three overs bowled out against 20 runs. Morne Morkel could manage to pick any wicket.

World Giants won the previous match due to the best performance by their batting order. They chased the target of 210 runs in 19.3 overs. The performance of their lower batting order was just outstanding. Kevin Pietersen was the most successful and highest run-scorer from their side who scored 53 runs on just 26 deliveries with the help of two boundaries and six huge sixes. Imran Tahir remained not out after scoring 52 runs. He faced 19 balls and smashed three boundaries and five huge sixes during his inning.

India Maharajas have strong bowling in the side

The toss can play an important role in the decision of this match. According to toss prediction, the team that will win the toss may elect to field first.

The 5th match of Legends League Cricket 2022 is scheduled to be held at Al Amerat Cricket Ground (Ministry Turf 1), Al Amerat. Pitch here in this stadium is a batting favored and with a little bit of bounce that may help the seamers. Spinners can play a key role on this pitch. A score of near about 290 runs should be as par.