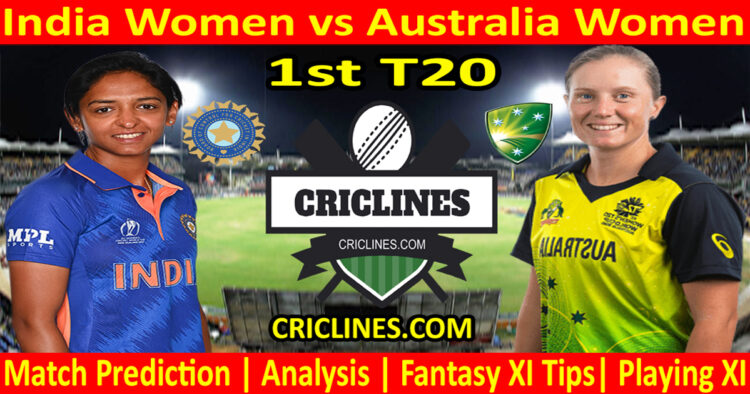 Cricket fans are ready to witness yet another big battle of women’s T20 cricket. The 1st T20 match of the Australia Women’s tour of India, 2022 is scheduled to be held on Friday, 9th December 2022 at Dr. DY Patil Sports Academy, Mumbai. We are providing 100 safe, perfect, and accurate today match prediction for all matches of Indian Women and Australia Women.

India is going to host the Australia Women’s team for five T20I matches. This series is very important for both teams as the Women’s T20 World Cup is scheduled to be held in February and both teams will try to get a good combination. We know that Australia had won the previous four matches in a row but this time, Indian women are playing in home conditions and we are sure that they will give a tough time to Australia. Both teams had been playing incredibly well and this series is going to be very interesting.

India had picked a strong team to face Australia in this home series of five T20 matches. Remember that India had won four out of the most recent five T20 matches. They have some great players in their squad for this series. Harmanpreet Kaur is the captain of team India and she is also in good form. Jemimah Rodrigues, Deepti Sharma, and Smriti Mandhana are experienced batters in the Indian squad. Smriti Mandhana had been just superb in some recent T20 matches. She had scored 2437 runs in 98 innings with an average of 27.38. We are sure that she will perform well and prove the highest run-scorer in this series.

Jemimah Rodrigues is another batter who is in good form. She had batted in 57 innings with 1490 runs to her name and her average is 31.70. India also has some good bowlers available for this series against Australia. Deepti Sharma had been in decent form in the most recent matches and had played well. She had picked 81 wickets in 76 innings. Rajeshwari Gayakwad is the other best bowler of the T20 format of cricket and will be leading the bowlers of team India. She had picked 54 wickets in 43 innings. It will be very difficult for the batters of Australia to score runs freely against these two bowlers. Radha Yadav, Meghna Singh, Renuka Singh, and Anjali Sarvani are other bowlers in the Indian squad.

Almost all Australian players had recently played in WBBL and the management of this team had sent a great squad for this five matches series against India. Alyssa Healy had been appointed as the captain while Beth Mooney, Heather Graham, and Ashleigh Gardner are in the squad of Australia. These all players were just superb in the recent edition of WBBL. Beth Mooney had also played decent cricket at the international level. She had batted in 65 innings and scored 1893 runs with an average of 37.86.

Heather Graham had played a lot of T20 games in domestic cricket and in a different league but had played just 1 T20 international. She is a good young batter and her role will be very important for this series. The bowling department of Australia is also strong. Jess Jonassen will be leading the bowling unit of Australia. She had picked 87 wickets in 90 innings. Megan Schutt is another best bowlers of the shorter format of cricket. She had played 83 T20 matches for Australia and picked 108 wickets. Alana King is a rising spring bowler of Australia. She had just played 11 matches and had 14 wickets to her name. The conditions in India are good for spin bowlers and we are sure that Alana King will play the main role in this series.

The 1st T20 match between India Women and Australia Women is going to be played at Dr. DY Patil Sports Academy, Mumbai. The pitch at this stadium is excellent for batting. The boundaries at this venue are short and will bring the spinners into play. The pitch will continue to be good for batting throughout the match.