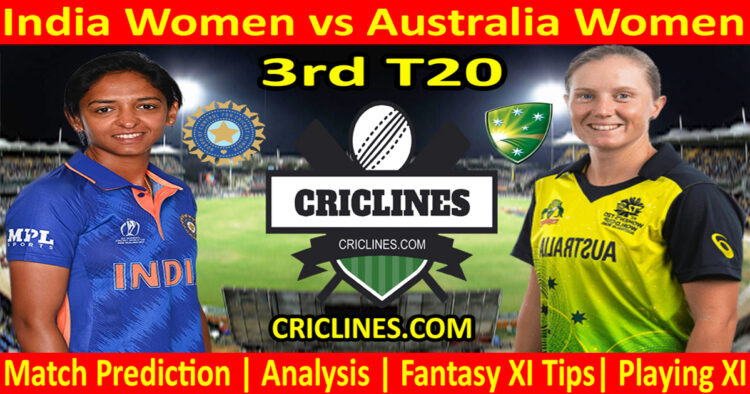 Cricket fans are ready to witness yet another big battle of women’s T20 cricket. The 3rd T20 match of the Australia Women’s tour of India, 2022 is scheduled to be held on Wednesday, 14th December 2022 at Brabourne Stadium, Mumbai. We are providing 100 safe, perfect, and accurate today match prediction for all matches of Indian Women and Australia Women.

The previous match of India Women and Australia Women was a thriller. It teams India who won the match even though it was tied and was decided in the super over. Devika Vaidya proved the hero of the match hit a boundary on the final ball of the 20th over. India scored 20 runs in the super over where Smriti Mandhana and Richa Ghosh were just outstanding and Australia scored 16 runs. Now this series of three T20 matches is leveled and this match is a series decider.

India Women bounced back after losing the first match and performed well in the second match. They are now in a good form and we are sure that this match will also be very interesting. The batters of the Indian team were good but their bowling units were disappointed. It is very interesting that the bowlers of India picked just two wickets in two matches against Australia. Deepti Sharma and Devika Vaidya had been economical but failed to pick a lot of wickets. They leaked 187 runs in 20 overs in the previous match. Deepti Sharma was the only bowler with a wicket to her name. She picked one wicket in four overs against 31 runs.

Australia Women performed well in the previous match and scored more runs than in the first match. This could an easy win for Australia but the lower batting order of India destroyed their dreams. Beth Mooney, Alyssa Healy, and Tahlia McGrath had just been superb in this series, and these batters were just good in the previous match where they scored 187 runs in 20 overs with nine wickets in hand. Beth Mooney was the highest run-scorer from their side and she scored 82 runs on 54 balls with the help of 13 boundaries. She remained not out till the 20th over. Tahlia McGrath also had an outstanding performance with the bat and scored 70 runs. She faced 51 balls and smashed 10 boundaries and one huge six. She also remained not out till the 20th over.

Jess Jonassen had been ruled out due to a hamstring strain and she will not be available for this match we think that Amanda-Jade Wellington will replace her in this match. The bowling unit of Australia did not perform well and leaked 187 runs in 20 overs. Megan Schutt had totally failed to give the best performance in this series and she had leaked a total of 86 without any wickets to her name. Heather Graham was the most successful and highest wicket-taker from their side with three wickets to her name in four overs against just 22 runs. Alana King also performed well and picked one wicket in two overs against 17 runs. Annabel Sutherland also had a wicket to her name but she leaked 14 runs in just one over. No other bowler from their side could manage to pick any wicket in the previous match. Ashleigh Gardner, Kim Garth, Megan Schutt, and Ellyse Perry were the bowlers who remained wicketless in the previous match.

The 3rd T20 match between India Women and Australia Women is going to be played at Brabourne Stadium, Mumbai. The pitch at this stadium is excellent for batting. The boundaries at this venue are short and will bring the spinners into play. The pitch will continue to be good for batting throughout the match.

The weather forecast in Mumbai on match day is not very good. There are some chances of rain but and that is possible that we may have an interrupted match.

Who Will Win India Women vs Australia Women 3rd T20