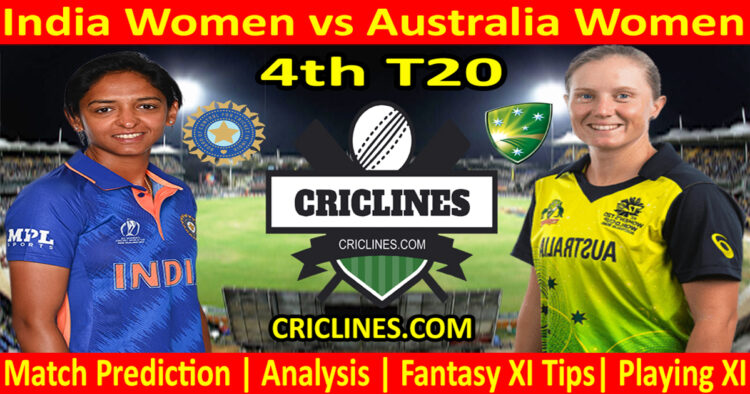 The world is ready to witness yet another big battle of women’s T20 cricket. The 4th T20 match of the Australia Women’s tour of India, 2022 is scheduled to be held on Saturday, 17th December 2022 at Brabourne Stadium, Mumbai. We are providing 100 safe, perfect, and accurate today match prediction for all matches of Indian Women and Australia Women.

Australia Women are leading the series of five T20 matches against India 2-1 and they need to win just one out of the remaining two matches. They performed well in the previous match and won the match by a handsome margin. India Women have to win both remaining matches to have this home series to their name. They also performed well in the previous match but were on the losing side.

India Women performed well in the second T20 match but failed to win the third match where they won the toss and decided to field first. The performance of their bowling unit was not much impressive as they leaked 172 runs in 20 overs. Renuka Singh was the most successful bowler from their side with two wickets to her name in four overs against 24 runs. Devika Vaidya also picked two wickets but she leaked 22 runs in three overs. Anjali Sarvani was the other bowler with two wickets to his name and she leaked 34 runs in four overs. Deepti Sharma also picked two wickets but she leaked a lot of runs. She was charged for 40 runs.

Rajeshwari Gayakwad and Radha Yadav were the bowlers who could not manage to pick any wicket. The performance of the batting order of India Women was good but they failed to chase the target of 173 runs and scored 151 runs in 20 overs. Shafali Verma was the most successful and highest run-scorer from their side scoring 52 runs on 41 balls with the help of six boundaries and three huge sixes. The skipper, Harmanpreet Kaur also had an outstanding performance with the bat. She scored 37 runs while she faced 27 balls and smashed six boundaries during her inning. Deepti Sharma remained not out after scoring 27 runs on 17 balls with the help of three boundaries while Jemimah Rodrigues could manage to score just 16 runs.

Australia Women had been just outstanding in this tour of India and they had performed well in almost each and every match of this tournament. The performance of their batting order was just outstanding in the previous match where they scored 172 runs in 20 overs. E Perry was the most successful and highest run-scorer from their side who scored 75 runs on just 47 balls with the help of nine boundaries and three huge sixes. Grace Harris also had an outstanding performance with the bat. She scored 41 runs on just 18 balls. She smashed four boundaries and three huge sixes during her inning. Beth Mooney was the other batter who put some runs on the board. She scored 30 runs with the help of four boundaries.

Alyssa Healy, Tahlia McGrath, Sutherland, and Megan Schutt scored just one run each. The bowling unit of Australia also performed well in the previous match and defended the target of 173 runs. They leaked 151 runs in 20 overs. They used seven bowlers and almost all bowlers from their side performed well. Darcie Brown was the most successful bowler from their side with two wickets to her name in four overs against just 19 runs. Ashleigh Gardner also picked two wickets while she was charged with 21 runs in three overs. Megan Schutt also performed well and picked one wicket in four overs while she was charged with 23 runs in three overs. Nicola Carey also picked one wicket but she leaked a lot of runs. She was charged for 44 runs in four overs. Annabel Sutherland, Alana King, and Ellyse Perry were the bowlers who failed to pick any wicket.

The 4th T20 match between India Women and Australia Women is going to be played at Brabourne Stadium, Mumbai. The pitch at this stadium is excellent for batting. The boundaries at this venue are short and will bring the spinners into play. The pitch will continue to be good for batting throughout the match.

Who Will Win India Women vs Australia Women 4th T20