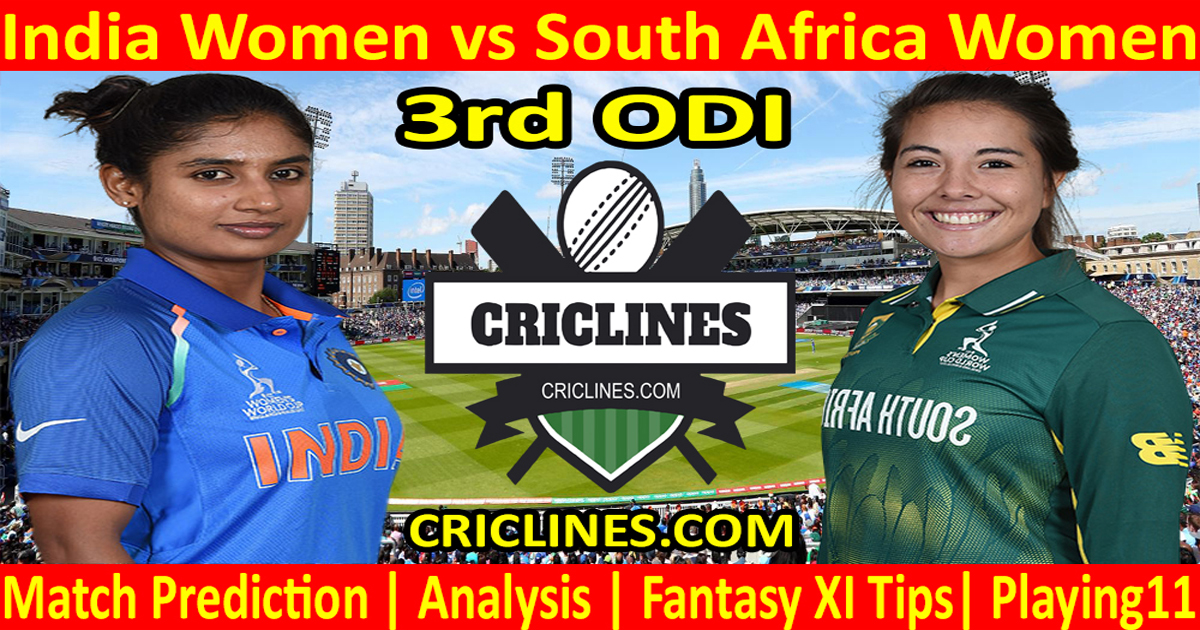 The world is ready to witness yet another big battle of Women ODI cricket. The 3rd ODI match of the South Africa Women tour of Australia, 2020 is scheduled to be held on Friday, 12th March 2021 at Bharat Ratna Shri Atal Bihari Vajpayee Ekana Cricket Stadium, Lucknow. We are providing 100 safe, perfect, and accurate today match prediction for all matches of India Women and South Africa Women.

India Women lost the first ODI but bounced back strongly in the 2nd match and won that match with a handsome margin of nine wickets. They won the toss and decided to field first. The way how their bowling department performed in that match was just outstanding. They send the all-team of South Africa back to the pavilion on a total of just 157 runs in 41 overs. Jhulan Goswami was the most successful and highest wicket-taker from their side who picked four wickets in her 10 overs bowled out against 42 runs. Rajeshwari Gayakwad also performed well with the ball and picked three wickets in her nine overs bowled out while she was charged for 37 runs.

Mansi Joshi picked two wickets while Harmanpreet Kaur had one wicket to her name. Deepti Sharma and Poonam Yadav were the bowlers who failed to pick any wicket. Like the bowling, the batting department of India also performed well and chased the target of 158 runs in just 28.4 overs. Smriti Mandhana was the most successful and highest run-scorer from their side who remained not out after scoring 80 runs. She faced 64 balls and smashed ten boundaries and three sixes. Punam Raut also had an outstanding performance with the bat. She scored 62 runs on 89 balls with the help of eight boundaries. She remained not out till the chase of the target.

South Africa Women won the first ODI match but lost the next match by a huge margin. The batting order of South Africa almost collapsed in that match. They could manage to score just 157 runs and were all-out in 42 overs. Lara Goodall was the only successful batswomen from their side who put some runs on the board. She scored 49 runs while she faced 77 balls and smashed just two boundaries. The skipper, Sune Luus also had an outstanding performance with the bat. She scored 36 runs on 56 balls and smashed five boundaries.

The bowling department of South Africa also failed to give the best performance in the previous match. They failed to defend a low target on the board and leaked the target of 158 runs in 28.4 overs. Shabnim Ismail was the only bowler from their side who picked a wicket in her six overs bowled out while she was charged for 46 runs. Marizanne Kapp, Ayabonga Khaka, Nonkululeko Mlaba, Nadine de Klerk, and the skipper, Sune Luus were the bowlers who failed to pick any wicket.

The 3rd ODI match between India Women and South Africa Women is going to be played at Bharat Ratna Shri Atal Bihari Vajpayee Ekana Cricket Stadium, Lucknow. The pitch at this stadium is excellent for batting. The boundaries at this venue are short and will bring the spinners into play. The pitch will continue to be good for batting throughout the match. As per the cricket match prediction, a total of 270 runs should be a par score on this pitch.