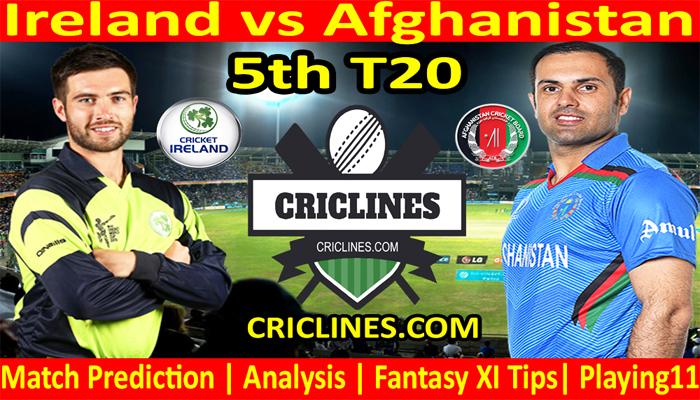 The fourth match of Ireland and Afghanistan was rain-affected and was reduced to 11 overs per side. The performance of the bowling department of Ireland was not impressive where they leaked 132 runs in 11 overs inning. Gareth Delany was the most successful and highest run-scorer from their side who picked three wickets in three overs bowled out but he leaked a lot of runs. He was charged for 33 runs. Mark Adair, Barry McCarthy, and Fionn Hand picked one wicket each while Simi Singh and Joshua Little were the bowlers who could not manage to pick any wicket.

The performance of the batting order of Ireland was good in the previous match but they could not chase the target of 133 runs and scored 105 runs in their inning of 11 overs. George Dockrell was the most successful and highest run-scorer from their side who remained not out after scoring 41 runs on just 27 balls with the help of four boundaries and two huge sixes. Paul Stirling also performed well with the bat and scored 20 runs. He faced just nine balls and smashed three boundaries and one huge six during his inning. The skipper, Andrew Balbirnie scored 15 runs while Harry Tector could manage to score just 13 runs.

The performance of the batting order of Afghanistan was not impressive in the opening two matches but now they are back to good form and had won two matches in a row. The way how their batting order performed in the fourth match was just outstanding. They scored 132 runs in 11 overs. Najibullah Zadran was the most successful and highest run-scorer from their side who scored 50 runs on 24 balls with the help of four boundaries and three huge sixes. Rashid Khan was the other batter who put some runs on the board. He scored 31 balls while he faced just 10 balls and smashed one boundary and three huge sixes during his inning.

Rahmanullah Gurbaz also performed well with the bat and scored 24 runs. The performance of the bowling department of Afghanistan was not much impressive but they defended the target of 133 runs and send the full team of Ireland back to the pavilion on a total of just 105 runs in 11 overs. Fareed Ahmad Malik was the highest wicket-taker from their side who picked three wickets in his two overs bowled out while he was charged for just 14 runs. Rashid Khan picked two wickets in three overs against 21 runs. Naveen-ul-Haq was the other bowler with two wickets to his name.

Ireland had played a total of 133 T20 matches where they won 55 while opposing teams had won 70 matches. Their 7 matches ended with no result and one match was tied.

Afghanistan had played 98 T20 matches so far. They had won 66 matches and had lost 32 matches.

Afghanistan had played 22 T20 matches against Ireland where they had won 16 matches while Ireland had won six matches.

Who Will Win Ireland vs Afghanistan Tri-Series 2019-5th T20

Dream11 Prediction for Ireland vs Afghanistan-Ireland Tri-Series 2019-5th T20. After checking the latest player’s availability, which players will be part of both teams, the possible tactics that the two teams might use as we had learned from previous matches of this series to make the best possible Dream11 team.