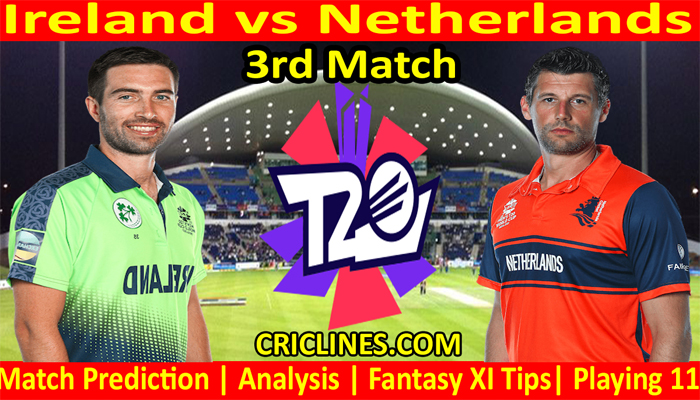 The world is ready to witness yet another big battle of World Cup T20. The 3rd Match of World Cup T20 2021 is scheduled to play between Ireland and the Netherlands on Monday, 18th October 2021 at Sheikh Zayed Stadium, Abu Dhabi. We are posting safe, accurate, and secure today match prediction of World Cup free.

Ireland was a good T20 team till 2018 but after that, we had not seen any type of quality cricket from this side. This team was beaten by UAE in the recently played T20 series with 2-1. We observed that Ireland had been struggling in spin-friendly conditions. This will also be a test case as this team is going to face the teams who had the best spin bowlers in their squad.

Ireland will be dependent on Paul Stirling, Andrew Balbirnie, and Kevin O’Brien for run-scoring and after the dismissal of these players, who don’t see any player in their squad who may lead the batting order. Curtis Camphor, George Dockrell, Harry Tector, and Gareth Delany are available in the squad of Ireland to handle the middle batting order. Craig Young and Joshua Little are the key bowlers of this side.

The Netherlands had improved its cricket and we are sure that they will make their way to the super 12 stages of the World Cup. The key players of this team had played in English County cricket and had got a lot of experience. This team had not played any match in the conditions of UAE but they had played a lot of cricket in Oman. The batting order of the Netherlands is dangerous when we compare it with the teams of their group.

Stephan Myburgh, Ryan Ten Doeschate, Max O’Dowd, Colin Ackerman, and Bas de Leede will be handling the batting order of the Netherland. These all players are known as good batsmen and we are sure that they will put a big total on the board. The bowling department of this team is also good at least on papers. Logan van Beek, Timm van der Gugten, and Fred Klaassen are the key bowlers in the squad of Netherlands.

Ireland had faced the Netherlands in 12 matches where Ireland won 4 and Netherlands had won 7 matches.

A Balbirnie, F Klaassen, and Paul Stirling are key players to watch in this match.

Ireland is full of experienced and young players of the t20 format. The batting order of this team is also strong and some well-known hitters of the t20 format are part of the squad of this team, so the winning chances of today’s match for Ireland have been increased. The equation of who will win today’s cricket match prediction and who will win the cricket match today is mentioned as under.

The 3rd Match match of World Cup T20 2020-21 is going to be held at Sheikh Zayed Stadium, Abu Dhabi. We had observed in the previous matches played here that the pitch here at this venue is good for batting. The track is slower than the others we have seen and helps the spinners quite a bit. We are hoping that the surface is bound to get slower and be a bit more difficult for batting in this match. A score of 180 is going to be tough to chase.

Who Will Win Ireland vs the Netherlands, 3rd Match WTC 21

Dream11 Prediction for Ireland vs Netherlands, 3rd Match. After checking the latest player’s availability, the Dream 11 Team for this match of Ireland vs the Netherlands, is mentioned under.