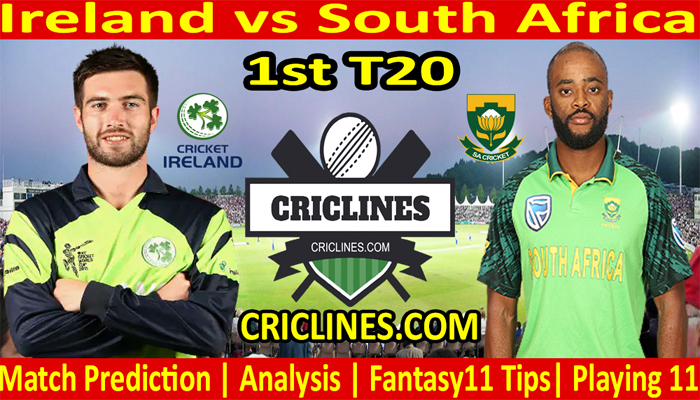 The world is ready to witness yet another big battle of T20 cricket. The 1st T20 match of the South Africa tour of Ireland, 2021 is scheduled to be held on Monday, 19th July 2021 at The Village, Dublin. We are posting 100 safe, perfect, and accurate today match prediction for all matches of Ireland and South Africa.

The ODI series between Ireland and South Africa had been tied with 1-1 and now both teams are going to face each other in the series of three T20 matches. There is no time left in the T20 World Cup and each match of this format is very important for both teams. Both teams will get their best playing XI in this match to set the squad for the World Cup.

Ireland is ranked at the 12th position in ICC T20 ranking and they had been very poor in recently played t20 series. We think that they will be nervous in this series against South Africa. Ireland had not played any T20 match in 2021 and this will be their first T20 encounter against one of the strongest teams of the world. In, 2020, they played six T20 matches with just one win to their name which they won against West Indies.

The batting order of Ireland is not stronger when it comes to the T20 format. They are dependent on Paul Stirling and Andrew Balbirnie for scoring the runs. Simi Singh, Kevin O’Brien, and Harry Tector are also part of the T20 squad of Ireland and they need to put some big runs on the board. Ireland has not any six-hitter on its side which is a big problem for this team. The bowling unit of Ireland is good but not strong when we compare it with South Africa. Mark Adair, Craig Young, and Joshua Little are the key bowlers for Ireland.

South Africa brought back its key players in the last ODI match and we saw the result. They will pick their best playing XI for this 1st T20 match. South Africa had its most recent played T20 series against West Indies where the key players like George Linde, Quinton de Kock, Tabraiz Shamsi, and Anrich Nortje give the best performances.

Ireland had played a total of 98 T20 matches where they won 42 matches and opposing teams won 48 matches. Their 7 matches were ended with no result and 1 match was tied.

South Africa had played a total of 136 T20 matches so far. They won 76 while other teams won 59 matches. One match of South Africa was ended with no result.

This will be the 1st T20 match of Ireland vs South Africa.

The 1st T20 match between Ireland and South Africa is going to be played at The Village, Dublin. This is one of the biggest venues in Ireland in terms of crowd capacity. The pitch on this venue is good for batting. It also has a bit of help for the spin bowlers. As per the live cricket score, a total of 180 runs should be a par score.

William Porterfield and Andrew Balbirnie had performed well with the bat in the 1st T20 and they are looking in superb form. Both players are key to watch from the side of Ireland while David Miller and Kagiso Rabada had been good in the recent time and will have a key impact on the performance of South Africa.

Who Will Win Ireland vs South Africa 1st T20

Who Will Win Ireland vs South Africa 1st T20 Toss-SA

Who Will Win Ireland vs South Africa 1st T20 Match-SA