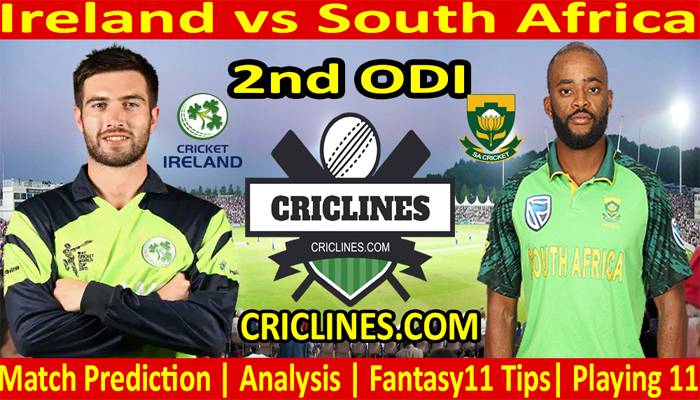 The world is ready to witness yet another big battle of ODI cricket. The 2nd ODI match of the South Africa tour of Ireland, 2021 is scheduled to be held on Tuesday, 13th July 2021 at The Village, Dublin. We are posting 100 safe, perfect, and accurate today match prediction for all matches of Ireland and South Africa.

The 1st ODI match of the South Africa tour of Ireland was ended with no result due to rain. We saw some good batting in the 1st innings by Ireland and this is an alarm for South Africa. Many of us were taking Ireland as a weak team but they had shown that they can give a tough time to any team especially on their home venues.

Ireland had lost a recent ODI series against Netherland in the previous month and now are going to host South Africa in three ODIs and the same T20 matches. Andrew Balbirnie is going to lead Ireland in this ODI series. He is a batsman and had played good cricket in recent times. The batting order of Ireland is good at least on papers. Graham Kennedy, Graeme McCarter, William Porterfield, Harry Tector, and Paul Stirling are going to lead the batting order of Ireland while Lorcan Tucker is a wicket-keeper batsman in the ODI squad of Ireland.

The bowling department of Ireland is not much stronger when we compare it with South Africa. Mark Adair, George Dockrell, Joshua Little, Andy McBrine, Barry McCarthy, Craig Young, Curtis Campher have the responsibility to handle the bowling department. Ireland had lost a couple of ODI series recently and this series against a strong team will be a test for this team.

South Africa had recently won a test and T20 series against West Indies and now they are on the tour of Ireland to give the final touch to the squad for World Cup. Temba Bavuma will be leading the South African team on this tour. He is a good batsman and had won most of the matches played under his captaincy. The batting order of South Africa is overall strong and experienced when we compare it with Ireland. The batsmen like Reeza Hendricks, Janneman Malan, Aiden Markram, David Miller, and Rassie van der Dussen, George Linde, Andile Phehlukwayo, and Quinton de Kock will be leading the batting order of South Africa.

Quinton de Kock is in the best form of his life as we observed him in the series against West Indies. He scored runs in almost each and every match he played and he will be dangerous against the weak bowling department of Ireland. South Africa is also rich when it comes to the bowling department. They have world-class bowlers in their squad like Lungi Ngidi, Anrich Nortje, Kagiso Rabada, Tabraiz Shamsi, Beuran Hendricks, Keshav Maharaj, and Bjorn Fortuin to destroy the batting order of Ireland. Lizaad Williams and Dwaine Pretorius are also available to help the regular bowlers.

Ireland had played a total of 168 ODI matches where they won 70 matches and opposing teams won 86 matches. Their 9 matches were ended with no result and 3 matches were tied.

South Africa had played a total of 629 ODI matches so far. They won 386 while other teams won 218 matches. The 19 matches of South Africa were ended with no result and 6 matches were tied.

Ireland had faced South Africa in 6 ODI matches where they won not won any match while South Africa had won all five matches played. One match between these two teams was ended with no result.

The 2nd ODI match between Ireland and South Africa is going to be played at The Village, Dublin. This is one of the biggest venues in Ireland in terms of crowd capacity. The pitch on this venue is good for batting. It also has a bit of help for the spin bowlers. As per the live cricket score, a total of 290 runs should be a par score.

William Porterfield and Andrew Balbirnie had performed well with the bat in the 1st ODI and they are looking in superb form. Both players are key to watch from the side of Ireland while David Miller and Kagiso Rabada had been good in the recent time and will have a key impact on the performance of South Africa.

Who Will Win Ireland vs South Africa 2nd ODI

Who Will Win Ireland vs South Africa 2nd ODI Toss-SA

Who Will Win Ireland vs South Africa 2nd ODI Match-IRE

We had provided you the above-mentioned match prediction today on the basis of our research, understanding, and analysis. You can consider the point we had provided you and in the end, the final decision will be yours.