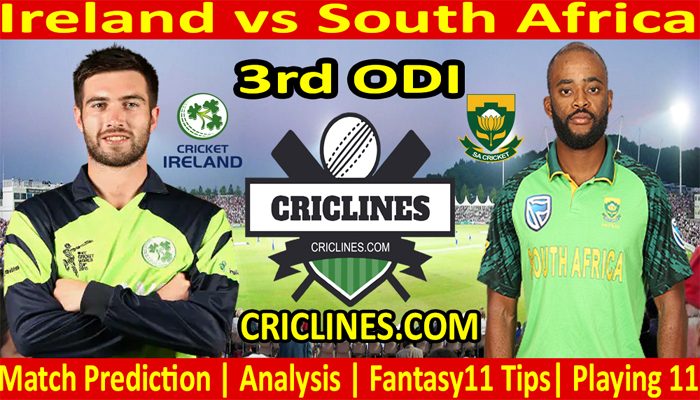 The cricket fans are ready to witness yet another big battle of ODI cricket. The 3rd ODI match of the South Africa tour of Ireland, 2021 is scheduled to be held on Friday, 16th July 2021 at The Village, Dublin. We are posting 100 safe, perfect, and accurate today match prediction for all matches of Ireland and South Africa.

Ireland had won the 2nd ODI match against South Africa and had proved that they are not an easy team. The batting order of Ireland had shown their strength in the 1st match and their bowling department also had been good.

Ireland had beaten South Africa in the 2nd ODI match with a handsome margin of 43 runs. They were asked to bat first after losing the toss. The way how their batting order performed in the previous match was just outstanding. They put a total of 290 runs on the board in their inning of 50 overs. Almost all batsmen from their side put some runs on the board. The skipper, Andy Balbirnie was the most successful and highest run-scorer from their side who scored 102 runs with the help of 10 boundaries and two huge sixes.

Harry Tector was the other batsman from Ireland’s side who played an outstanding inning with the bat. He scored 79 runs while Dockrell scored 46 runs on just 23 deliveries with the help of five boundaries and two huge sixes. The bowling department of Ireland also had an outstanding performance in the previous match against South Africa. They defended the target of 291 runs and send the all-team of South Africa back to the pavilion in 48.3 overs on a total of 247 runs. All bowlers from their side performed well and picked wickets. Andy McBrine, Joshua Little, and Mark Adair picked two wickets each while Craig Young, Simi Singh, and George Dockrell picked one wicket each.

South Africa is a strong and experienced team when we compare it with Ireland but they had failed to have a good start and had lost the 1st match by a handsome margin of 43 runs. The bowling department of South Africa failed to give their best performance and leaked plenty of runs. They were charged for 290 runs in their 50 overs inning. Andile Phehlukwayo was the highest wicket-taker from their side with two wickets to his name. He bowled out 10 overs and leaked 73 runs. Kagiso Rabada, Tabraiz Shamsi, and Keshav Maharaj picked one wicket each while Anrich Nortje failed to pick any wicket.

The batting order of South Africa performed well but failed to chase the target of 291 runs. They were all-out on a total of 247 runs in 48.3 overs. The opening batsman, Janneman Malan was the only successful batsman from their side who put some runs on the board. He scored 84 runs with the help of seven boundaries and four huge sixes. Rassie van der Dussen scored 49 runs while David Miller could manage to score 24 runs.

Ireland had played a total of 169 ODI matches where they won 71 matches and opposing teams won 86 matches. Their 9 matches were ended with no result and 3 matches were tied.

South Africa had played a total of 630 ODI matches so far. They won 386 while other teams won 219 matches. The 19 matches of South Africa were ended with no result and 6 matches were tied.

Ireland had faced South Africa in 7 ODI matches where they had won just 1 match while South Africa had won five matches played. One match between these two teams was ended with no result.

The 3rd ODI match between Ireland and South Africa is going to be played at The Village, Dublin. This is one of the biggest venues in Ireland in terms of crowd capacity. The pitch on this venue is good for batting. It also has a bit of help for the spin bowlers. As per the live cricket score, a total of 290 runs should be a par score.

William Porterfield and Andrew Balbirnie had performed well with the bat in the 1st ODI and they are looking in superb form. Both players are key to watch from the side of Ireland while David Miller and Kagiso Rabada had been good in the recent time and will have a key impact on the performance of South Africa.

Who Will Win Ireland vs South Africa 3rd ODI

Who Will Win Ireland vs South Africa 3rd ODI Toss-SA

Who Will Win Ireland vs South Africa 3rd ODI Match-SA