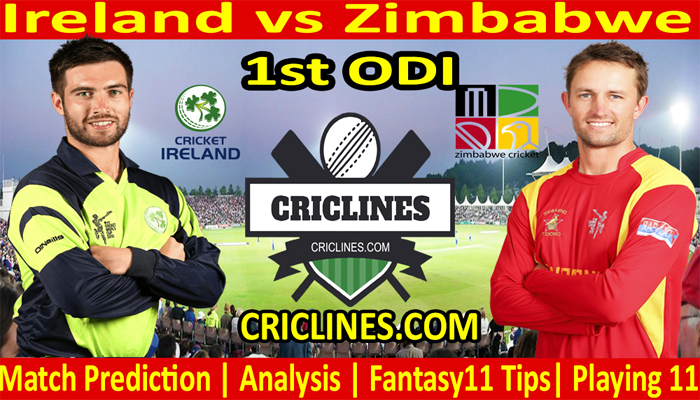 The world is ready to witness yet another big battle of ODI cricket. The 1st ODI match of Zimbabwe tour of Ireland, 2021 is scheduled to be held on Wednesday, 8th September 2021 at Civil Service Cricket Club, Belfast. We are posting 100 safe, perfect, and accurate today match prediction of Ireland and Zimbabwe.

Ireland had won the series of five T20 matches with 3-2 and now they are going to face Zimbabwe in the three ODI matches series. Ireland has the advantages of the home ground.

Ireland had performed well in the T20 series and we are sure that they will continue their good form in the ODI series. Andrew Balbirnie is going to lead Ireland in this home series of three ODI matches. Graham Kennedy, William Porterfield, and Harry Tector are the key batters in the squad of Ireland. Simi Singh, Paul Stirling, and Curtis Campher are the all-rounders in the squad of Ireland.

Zimbabwe won the 1st T20 match of this tour of Ireland but they lost the next three matches in a row and won the last T20 match. The team management of Zimbabwe had made some key changes in their final squad for this ODI series. Craig Ervine is going to lead Zimbabwe in this ODI series. Tinashe Kamunhukamwe, Tarisai Musakanda, Dion Myers, and Milton Shumba will be handling the batting order of Zimbabwe.

Ireland had played a total of 170 ODI matches where they won 71 matches and opposing teams won 87 matches. Their 9 matches were ended with no result and 3 matches were tied.

Zimbabwe had played a total of 536 ODI matches so far. They won 140 while other teams won 378 matches. Their 7 matches were tied and 11 matches were ended with no result.

Ireland had won the T20 series and are in good form

The 1st ODI match between Ireland and Zimbabwe is going to be played at Civil Service Cricket Club, Belfast. This is one of the biggest venues in Ireland in terms of crowd capacity. The pitch on this venue is good for batting. It also has a bit of help for the spin bowlers. As per the live cricket score, a total of 280 runs should be a par score.

Who Will Win Ireland vs Zimbabwe 1st ODI

Who Will Win Ireland vs Zimbabwe 1st ODI Toss-ZIM

Who Will Win Ireland vs Zimbabwe 1st ODI Match-ZIM

We had provided you the above-mentioned today cricket prediction on the basis of our research, understanding, and analysis. You can consider the point we had provided you and in the end, the final decision will be yours.